Blue and White leader Benny Gantz does not realize that if he wants to be prime minister, he will need a high voting rate among the country’s Arab citizens. 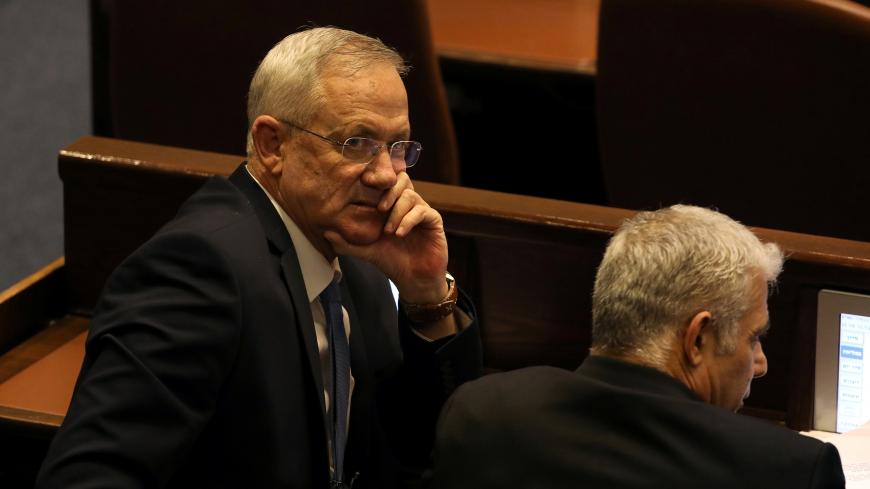 Benny Gantz, leader of Blue and White party, and Yair Lapid attend a parliamentary vote for its dissolution and approval of a date for a third national election in less than a year, at the Knesset, or Israel's parliament, Jerusalem, Dec. 11, 2019. - REUTERS/Ammar Awad

Breaking right. That’s the direction the Blue and White party has chosen for itself in the 2020 election. The purpose of this move is absolutely clear. It wants to attract right-wing voters, with an emphasis on the soft right. This means voters who don’t want a prime minister under indictment, who will end up spending his mornings in court and his evenings meeting with his Cabinet and security Cabinet. The problem is that Blue and White party Chairman Benny Gantz made a sharp and dangerous turn toward voters aligned with HaBayit HaYehudi and the National Union. It is like he is running against Yamina senior Bezalel Smotrich and not Prime Minister Benjamin Netanyahu.

Gantz announced Jan. 8 that releasing the “deal of the century” right before the March 2 election would be, “callous and genuine intervention in the process.” But then Jan. 21 came around, and he sounded different. During a tour of the Jordan Valley, Gantz said that the Blue and White party would take steps to annex the Jordan Valley after the election. Referring to the “deal of the century,” he said, “I hope the president will move up [the rollout] and I expect the plan will be released very soon.” In doing all this, Gantz shifted the issue of imposing Israeli law and annexing the Jordan Valley to the top of the agenda, and he did it on the same day that the Arrangements Committee released the dates for the Knesset Committee to debate Netanyahu’s request for immunity.

Without even noticing it, Gantz scored a goal on his own net — perhaps even two goals — with a single kick. He made a first-rate strategic error when he dropped the issue of immunity. It already featured on the political and media agenda for the past few weeks, and Netanyahu and the Likud had no adequate response to it. What did Gantz do? He talked about annexing the Jordan Valley instead, as if he wanted to prove to voters on the right that he speaks fluent “right-wing talk,” too. What he really ended up doing, however, was move himself willingly into Netanyahu’s home field. Immunity is out; annexation of the Jordan Valley is in. Gantz’s statement about annexation landed on Netanyahu like a gift from heaven. He was quick to pose a challenge to Gantz, tweeting: “Why wait until after elections, if it’s possible to impose sovereignty on the Jordan Valley right now, with broad agreement in the Knesset? Benny Gantz, I expect your answer this evening, unless of course Ahmad Tibi [Arab Joint List party senior] hands you a veto.”

Strategic consultant Lior Horev told Al-Monitor, “The public has very little faith in the statements and promises of politicians. Very few people believe Netanyahu’s statement that he would annex the Jordan Valley, just as they don’t believe statements about doubling the number of hospital beds and other such promises made by politicians on the eve of an election. Benny Gantz fell right into the classic left-right trap.”

When Blue and White decided it would break right, its goal was to succeed where it failed in the April and September elections. In other words, it wanted to be seen as a center-right party rather than a center-left party, and to use that image to attract right-wing voters. That seems to be why Blue and White Knesset members like Hili Tropper, Yoaz Hendel and Elazar Stern — all of them associated with the religious Zionist movement — have appeared in the media more frequently of late. At the same time, the Blue and White party is keeping its distance from the Joint List and the very idea of a minority government, as if it was some contagious disease. Last week, we even witnessed a fight between Knesset member Ahmad Tibi of the Arab Joint List and Knesset member Hendel, in which Tibi lashed out at him, warning: “Keep talking about annexing the Jordan Valley, and Gantz will remain chairman of the opposition.”

Was it really the Blue and White party’s goal to have Benny Gantz use his statements to become Bezalel Smotrich’s doppelganger? Apparently not. This kind of discourse is not what will cause three or four seats to switch their allegiance from the right-wing, ultra-Orthodox bloc to the center-left. As far as right-wing voters are concerned, there is no reason to prefer some imitation of “right-wing talk” when they can go to the source, which has talked the talk for years.

The last person to win an election against Netanyahu was former Prime Minister Ehud Olmert in 2006. As head of the Kadima party, he left Netanyahu and the Likud with just 12 seats, and he did it without getting drawn into the game of “who is more right-wing.” In a conversation with Al-Monitor this week, Olmert expressed his reservations about Gantz’s statement regarding the annexation of the Jordan Valley. “I am against annexing the Jordan Valley," he said. "It’s not necessary. The State of Israel can find appropriate solutions to its security issues without annexing the Jordan Valley. Netanyahu is trying to light a fire of terror and bloodshed in our region.”

According to Olmert, “Israel’s annexation of the Jordan Valley would cause a rift in our relationships with the other countries in the region, including Jordan and Egypt, not to mention firm expressions of reservation from the international community. The whole move is intended to win Netanyahu a few more points, but it will not save him from defeat in the election. It’s too bad that Benny Gantz followed Netanyahu’s lead and got drawn into this.”

Will Gantz be able to win the support of voters on the right? He tried to do that in his last two election campaigns, and it didn’t work. His attempts devolved into pure absurdity, when, at one point, he was afraid to call Arab citizens just that, and referred to them as “non-Jews” instead. As of now, it looks like the only real game changer, which can result in Gantz taking the oath of office, as prime minister would be a high voting rate among the Arab public. This is obvious to Netanyahu, too. It is why he fought so hard against the Arab electorate in the last few elections. He realizes that every vote cast by an Arab citizen is a vote against him.

This is the big mistake being made by Gantz and the Blue and White party. Instead of encouraging Arab society in general to get out and vote, Blue and White made every possible mistake, ensuring that Arab voters would not go out of their way to elect Gantz as prime minister. From another perspective, it is not at all surprising that this is happening to someone who made a fatal strategic mistake this week and spared his rival from embarrassment.