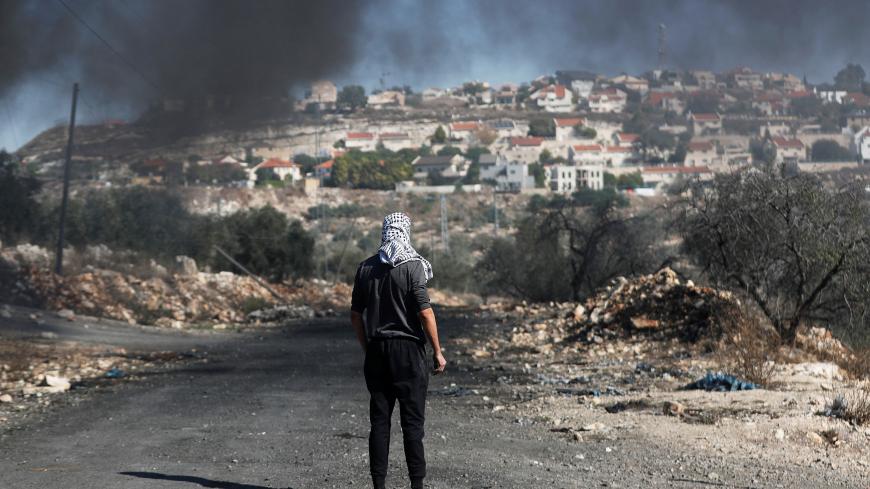 A Palestinian demonstrator stands near the Jewish settlement of Qadomem during a protest against settlements, Kofr Qadom, Israeli-occupied West Bank, Nov. 22, 2019. - REUTERS/Mohamad Torokman

The issue of possible Israeli land annexation in the West Bank has become an endless source of spin for Israeli politicians. The hard-line right-wing Yamina party is accusing the right-wing Likud of not really wanting to push ahead with the annexation and only giving it lip service. The centrist Blue and White party said it was willing to discuss such a move “under certain circumstances,” only to have its No. 2, Gabi Ashkenazi, reportedly dismiss the option out of hand.

Two things stand out in this regard. The first is the normalization of the annexation idea. The senior Israeli politicians on the verge of forming a unity government of some sort, whether now or after fourth elections are held in the summer, are addressing the annexation issue in terms of when, not if. Whereas two or three years ago, talk of annexation was the purview of Knesset members from the hard-line HaBayit HaYehudi (now Yamina) party and the most right-wing flank of the Likud, nowadays, the leader of Blue and White Benny Gantz is wrangling with Prime Minister Benjamin Netanyahu over the manner of its execution and its extent, not over the very question of whether the issue should be considered at all. Meanwhile, members of Gantz’s party, some of them originally Labor party voters, are keeping mum on the issue.

The second thing that stands out: There is a clear majority in the current Knesset, and probably in the next one, too, for annexation. The right-wing bloc, joined by the newly minted faction of Knesset members Zvi Hauser and Yoaz Hendel (Derech Eretz), Knesset member Orly Levy-Abekasis (Gesher faction) and probably Blue and White’s lawmakers, as well as the seven representatives of the Yisrael Beitenu party and perhaps even Yesh Atid, could all vote in favor of annexation. If Netanyahu (assuming he is the next prime minister) moves ahead with annexing the settlement town of Maale Adumim, its surrounding area (known as E1) or the Jordan Valley, he is presumably assured Knesset approval.

The prime minister’s office continues to work on possible annexation maps, but with the coronavirus running amok, all this talk is motivated by politics rather than ideology. The controversial annexation issue serves the various parties involved as a bargaining chip and a tool with which to goad their rivals, whereas actual implementation of this move entails three conditions: formation of a government, a full return to post-corona normal, and White House support. Since a return to normal could take time, and the White House is busy managing the COVID-19 crisis and preparing for the November elections, even if a new Israeli government is sworn in, annexation legislation could be delayed until after the US presidential vote. In other words, it will not happen in the coming days, weeks or months.

The Arab world, however, does not make the distinction between the ideological component of annexation and the political one, and is monitoring the declarations of Israeli politicians with grave concern. On April 13, the Arab League warned of the severe repercussions of annexation, and Palestinian President Mahmoud Abbas held an urgent round of phone consultations with Arab leaders. The Palestinian leadership is convinced that Israel and the White House are pushing forward with the “deal of the century” that President Donald Trump unveiled in late January while the world’s attention is diverted by the coronavirus. Ramallah, as well as Amman, Cairo and Riyadh view the much-discussed annexation as an immediate threat, even if only a theoretical one, for now.

The Israeli annexation discourse bolsters radical elements in the Arab world and undermines the moderates. At this stage, with Arab regimes dealing with the COVID-19 outbreak, the issue could fan the flames of regional instability and endanger Israeli security. A recent internal Foreign Ministry assessment reflects Israel’s concerns over a possible collapse of several Arab regimes as a result of the coronavirus, an Iranian breakout toward a nuclear weapon and significant strengthening of radical terror organizations, such as the Islamic State and al-Qaeda. With Israel aware of the regional threats to its security, it would be logical to assume that now is not the time to rock the fragile Middle Eastern boat and to undermine cooperation with the Palestinian Authority, Jordan, Egypt and the Gulf States. Even before the pandemic, the Arab regimes and their populations were not enamored by the annexation prospects. Now, with millions in the Arab world unemployed and facing a severe economic crisis, any hasty move could deal a blow to the delicate fabric of Israel’s relations with the Arab world and eventually have a much harsher impact on Israel’s security.

Most former and current defense officials who enjoyed close relations with their senior Arab counterparts for decades are aware of the danger lurking in the annexation policy. Maj. Gen. (Res.) Amos Gilad, former director of policy and political-military affairs at the Ministry of Defense, warned Feb. 7, after President Donald Trump unveiled his plan for Israeli-Palestinian peace, that imposing Israeli sovereignty over the Jordan Valley would undermine the peace treaty with Jordan. Former Mossad chief Danny Yatom expressed a similar view, whereas Commanders for Israel’s Security, a nonprofit representing dozens of former defense officials, has conducted an online campaign designed to influence Benny Gantz, Gabi Ashkenazi and Labor leader Amir Peretz to withhold support for the move.

These harsh warnings of an impending disaster, particularly at such a sensitive time when the battle to defeat the coronavirus should be at the top of Israel’s agenda, appear to be falling on deaf ears. The distinction between army and defense agency veterans who conducted Israel’s ties with Arab regimes for years, and the politicians, most of whom lack any experience in defense or diplomacy, is evident. Even Netanyahu, who in the past avoided annexation moves and sidelined proposed legislation by members of his Likud party to annex Maale Adumim and the Jordan Valley, continues to throw about promises of annexation. This is a man who periodically meets and talks with Arab rulers, and knows their views on annexation and the threat that it poses in destabilizing the Middle East. His actions contradict his favorite and widely expressed thesis that the Arab world does not care about the Palestinians and would be willing to advance ties with Israel, even if it fails to reach an agreement with the Palestinians.

Israel has failed to establish formal relations with more Arab states in recent years, and it has not boosted trade or forged closer diplomatic ties. While it enjoys a slight warming of relations with some Arab rulers, and growing public interest in what it has to offer, Israel would pay dearly if it annexed the West Bank, dealing a significant blow to the Palestinians and destabilizing Jordan. The repercussions would put an end to its dreams of cooperation with the region and of a united front against Iran. 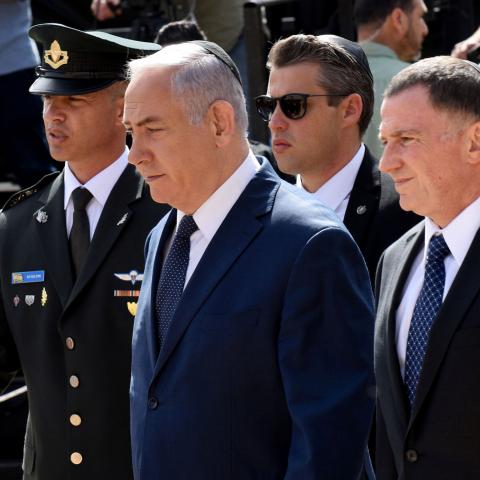