Palestinians to give UNSC bid another shot

The Arab League has backed Palestinian calls for another attempt at the UN Security Council, with the Palestinians confident they can secure the needed votes after the changeover of seats. 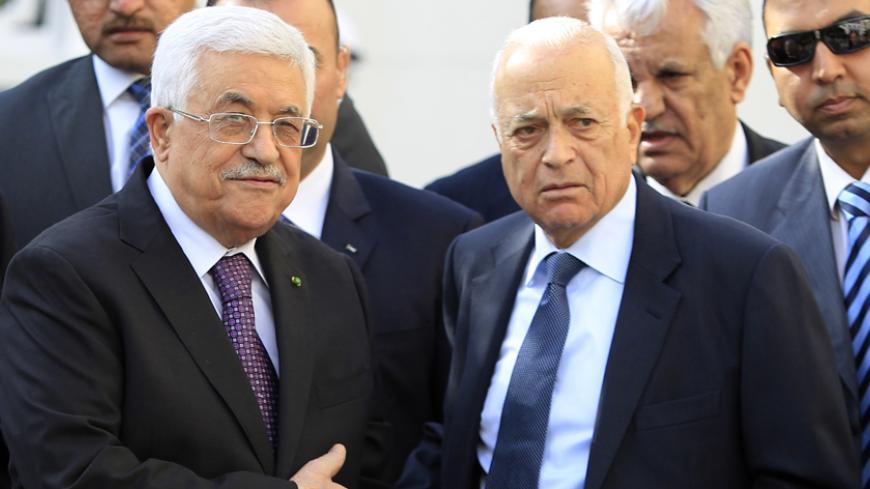 The Arab foreign ministers meeting in Cairo Jan. 15 approved a Palestinian request to return to the UN Security Council to seek an end to the Israeli occupation. The ministers did not set a date for the next UN campaign, leaving the decision to a committee made up of Jordan, Kuwait, Mauritania, Egypt, Morocco and Palestine. Addressing the foreign ministers, President Mahmoud Abbas asked Arabs to financially support the Palestinian government in light of Israel’s decision to withhold tax revenue. Abbas said that the Palestinians had notified the United States of their intention to join the International Criminal Court (ICC). “Had America told Israel to stop settlements, we wouldn’t have gone,” he added.

The Palestinian leadership’s desire to return to New York has repeatedly been made clear by Abbas since the previous bid failed. At a Jan. 4 cultural conference in Ramallah, Abbas said, "We didn't fail, the UN Security Council failed us. We'll go again to the Security Council, why not?”

After participating in the Paris solidarity rally, Abbas told Turkish President Recep Tayyip Erdogan that Palestinians will seek another vote at the UN Security Council. And at a Jan. 12 press conference, he said, "Nothing will ever deter us from continuing our march toward obtaining the rights, freedom and independence of our people."

On paper, the chances of a Palestinian statehood resolution receiving the nine positive votes needed have been greatly increased with the changes at the turn of the year. Australia, which voted against the resolution, has been replaced by New Zealand, and majority-Muslim Malaysia has replaced South Korea, which abstained. Sources in the Palestinian and Jordanian missions in New York are optimistic.

However, the sources, speaking on condition of anonymity, warned Al-Monitor that nothing is sure until a vote is taken. One concern, said a Jordanian source at the UN who wished to remain anonymous, is France, which might abstain in future votes because of its opposition to the decision of the Palestinian leadership to sign the Rome Statute.

On the other hand, some Palestinian officials are trying to pressure another permanent member, the United Kingdom, to join the majority members and vote in favor of the Palestinian resolution.

Palestine Liberation Organization Executive Committee member Hanan Ashrawi made the call during a meeting with the British Counsel General in Jerusalem Jan. 14. Ashrawi told the British diplomat that such a move, along with the recognition of the state of Palestine will “constitute a significant contribution to peace and justice and rectify the grave historical injustice suffered by the Palestinian people since the days of the British Mandate.”

Despite the statements by Palestinian officials and the decision of the Arab League, it is unlikely that any major push will take place in the UN in the next weeks or months. Jordanian officials, who had preferred that the vote be delayed until early 2015, feel that a revote will be another opportunity to discuss the Palestinian issue, but will not pass. The insistence of the United States on opposing any UN move until the Israeli elections in March has been made crystal clear, the Jordanian UN source said.

Israel has refused to transfer roughly $128 million in tax funds collected on behalf of the Palestinians as a direct result of their decision to join the ICC. Some members of the US Congress and the Obama administration are calling for a similar action.

One argument that might explain the talk of returning to the Security Council is that Palestinians need to keep applying public and political pressure on Israel. Threatening to return to the UN is meant to stabilize US-Palestinian relations in light of expected Israeli and US financial pressures that will not be compensated for by Arab countries, despite their lip service.

Palestinians are likely, therefore, to be testing Arab leaders. If, under US pressure, they want Palestinians to refrain from making another bid at the Security Council, they will have to make up for Palestine’s lost income due to the Israeli and US reaction to the Palestinians joining the ICC.

The success of the Republicans in last November’s midterm elections in gaining control of the Senate as well as the House of Representative means that pro-Israel right-wing circles will flex their muscles and try to put further conditions on the $400 million annual aid package to the Palestinian government.

In this context, the signal to Israel’s friends in Washington was clear when Israel publicly called on the new Congress to cut off aid to the Palestinians as a reaction to Abbas’ decision to join the ICC. Congress, still busy with other priorities, has yet to make a strong response either way on this issue.

Palestinian-American analyst Yousef Munayyer told Mondoweiss Jan. 5 that Washington might speak out against Abbas, but is unlikely to move against him, saying, “At the end of the day, the Israelis need the [Palestinian Authority (PA)], and the PA needs the Israelis, and the Americans need them both to find a way to stick around with the negotiations paradigm that they have.”

Abbas is interested in keeping the pressure on the Israelis for domestic reasons as well. Abbas, who is preparing for Fatah’s crucial seventh congress sometime late in January, is under pressure to show his people that his nonviolent political actions are producing some results and that his policies, rather than the violence of Hamas, are the best way to win the coveted Palestinian statehood.