Can the EU resuscitate the two-state solution?

The Palestinian leadership is pressuring the European Union to take stronger stances against Israeli actions in the Palestinian territories after President Donald Trump revealed his 'deal of the century,' which threatens a two-state solution. 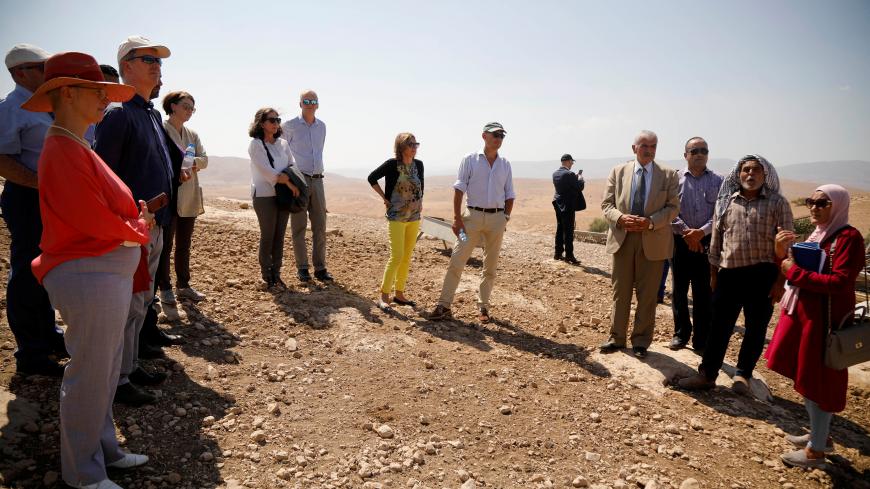 RAMALLAH, West Bank — Palestinian leaders are counting on the European Union to renew its commitment to a two-state solution for resolving the conflict with Israel. This comes after US President Donald Trump on Jan. 28 revealed the details of his so-called deal of the century for peace, which threatens the approach and which the Palestinians have rejected.

In a speech following a meeting of the Palestinian leadership in Ramallah on the day of the plan's release, President Mahmoud Abbas noted that the EU still advocates the two-state solution based on its international legitimacy. He also stated, “Europe is becoming aware that it has done us great injustice in the past and must rectify some of the mistakes it made over the past one hundred years.”

Saeb Erekat, secretary-general of the PLO Executive Committee, met on Jan. 29 in Ramallah with EU diplomats and in a tweet afterward remarked, “Today’s meeting with the EU Heads of Mission focused on concrete measures that have to be taken. The Annexation Plan is an attack against international law and the international system as a whole. This is a moment of truth #PeaceNotApartheid.”

In the days preceding Trump’s unveiling of his plan, the Palestinian leadership had intensified pressure on the EU to take a bolder stance toward Israeli actions in the Palestinian territories, the peace process and a two-state solution. The Palestinian Foreign Ministry lashed out at the EU in a Jan. 21 statement, accusing it of “shy, insufficient and late” responses in regard to measures taken by Israel and of failing to rise to the level of those actions and shouldering its own responsibility.

In addition, Palestinian Prime Minister Mohammed Shtayyeh has pressured EU countries to recognize the state of Palestine. During a Jan. 21 meeting with Swedish Foreign Minister Ann Linde at the 50th annual meeting of the World Economic Forum in Davos, Switzerland, he said Europe’s recognition is necessary in light of Israeli threats to annex West Bank lands.

“Sweden is a model for European Union countries by recognizing Palestine and turning their political convictions into action,” Shtayyeh said. Sweden recognized Palestinian statehood on Oct. 30, 2014. Shtayyeh also urged Switzerland and Belgium to hasten their recognition of the state of Palestine in order to confront Israel’s annexation threats.

“We want the European Union to work collectively to protect the two-state solution and the international resolutions that Israel violates daily, by trying to impose a fait accompli based on the theft of Palestinian lands and killing the possibility of statehood,” Shtayyeh said. “Europe should lead an international effort for the post-Trump project.”

Ahmad Jamil Azm, head of strategic affairs for the Palestinian prime minister, told Al-Monitor that the Palestinians want the EU to prove its commitment to the two-state solution by taking practical steps to uphold the possibility of such a solution. These include most notably rejecting political initiatives that do not include previous international conventions and recognition of a Palestinian state. The Europeans also need to continue to adhere to relevant UN resolutions and their previous stances in support of two states.

To be effective, European recognition of Palestine requires the consensus of all member states, but this is unlikely to happen any time soon. Shadi Othman, spokesman for the EU Commission in Jerusalem, explained that in light of disagreement among EU countries on recognizing Palestine, the EU’s unified, official position remains limited to steps aimed at keeping the two-state solution viable and taking the related, necessary actions on the ground.

“The EU’s recognition of the state of Palestine has been extensively debated, and some member states have demanded it,” Othman told Al-Monitor. “But I think this is difficult to make happen at the moment in light of the lack of a general consensus among [EU] countries on recognition.” He added that this year the EU will provide €300 million in aid to the PA, and barring major political developments, will provide assistance for the next two years.

Regarding Palestinian criticism of the EU, Othman said, “The EU shows understanding and pragmatism when dealing with the Palestinian issue. Despite the political changes in the region, the EU is trying to keep its vision of a two-state solution viable. The relationship between Europe and Palestine will remain strong and open despite the perplexing challenges on the ground.”

After the official announcement of Trump's plan, the Palestinians severed ties with the US administration, which has been mediating the peace process since 1993. This puts them in a delicate position of demanding stronger positions on the Palestinian issue from other parties while also being unable to afford the loss of financial support from those actors, like the EU.