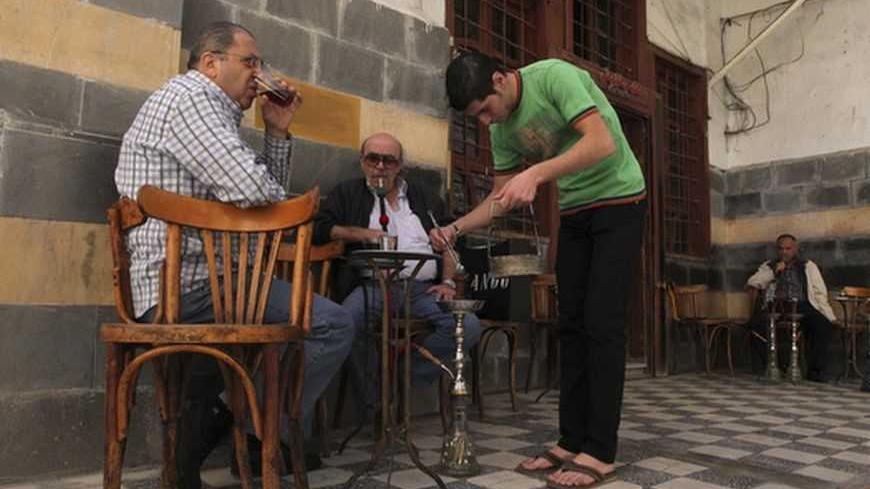 Men drink tea and smoke water pipes at a cafe in the old city of Damascus, Nov. 8, 2012. - REUTERS/Muzaffar Salman

The signs of fatigue are obvious on the faces of the Lebanese General Security staff charged with stamping the passports of people crossing the Syrian-Lebanese border.

One General Security officer complained about the non-stop convoys of displaced Syrians entering Lebanon. "When the military situation escalates in the Damascus countryside, our work intensifies here. Sometimes we receive more than 500 Syrian and Palestinian refugees in a single day. At other times, things are puzzling, as the number of Syrian refugees coming from Syria is equal to the number of those returning to Syria," he said.

He continued speaking as if conversing with himself: "There is no logic to this war, nor is there any logic in the rates of displacement to and from Syria." He added that "Syrian refugees are deeply distressed by the immigration process to the extent that we feel that another Syrian uprising could hit us here. The Lebanese General Security building in the industrial area is too narrow and does not fit the ongoing convoys pouring in from the border. At times, some Syrian refugees get angry, complaining about the long wait in line to have their passports stamped."

Another officer added, "This building has not been expanded since it was first built during the French mandate in the 1920s."

Nevertheless, along the international road from the Syrian industrial area all the way to the city of Damascus, things appear to be the same. There is a sign that reads "Welcome to Damascus." A few meters away on a small mound rises a large mural depicting President Hafez al-Assad donning a military hat against the background of the faces of his two sons, Bashar, the current president, and Bassel, who would have been president, had he not died in a horrific car accident.

This mural embodies the story of the family that has ruled Syria since 1970, when Hafez al-Assad turned against his comrades in the Baath Party, under the banner of the "corrective movement." For its part, the Syrian opposition believes that the survival of this wall is further proof that the same problems persist in Syria, without any solution in sight.

Assad's supporters, on the other hand, believe that this wall demonstrates that the regime continues to exist despite everything that is happening and will happen. The highway from the Lebanese border to Damascus is open. Throughout the events, no security incidents have occurred on this road, aside from minor clashes. Besides this, traffic on this road is the same, with a few Syrian army checkpoints deployed every three kilometers along the way. Soldiers at these checkpoints have been given orders to address passengers in a pleasant and gentle manner, but to carefully check identification and thoroughly search cars. At each checkpoint, one will notice that soldiers have different accents, which is a sign that despite the fragmentation of Syrian society, the army continues to preserve the country's unity under its banner.

Often, people in civilian clothes stand at a close distance from the checkpoints, gazing at passengers. Their traits suggest that they are either affiliated with the intelligence services or volunteers from outside the army. They are known for being the most stringent in defending the regime.

By looking at their features and faces, one can tell from which region they come. Their straight, thick black hair and red-cheeked faces suggest they are Alawites from the coast and mountains. Their harsh accent, which remains so even when they try to speak gently, is another indication of their identity.

Signs of normal life can be found around the city. At the entrance of the Mezzeh highway, one can see people of all ages waiting for cabs to take them home, as it was during the days of security and safety, before the eruption of the revolution.

In the circumstances of civil wars, citizens do not move about their regions as usual. In Beirut, for instance, during the lengthy civil war from 1975 until 1990, the city center had moved from the downtown market in the capital — which gathered all sects coexisting economically, culturally and religiously — to streets of less importance, such as those in Hamra and Verdun. These two areas kept themselves distanced from sectarian rifts, as all their residents come from the tolerant middle class, which kept its distance from the war of political partisanship.

Mezzeh Street from 2011 to 2013 is reminiscent of Hamra Street during the period from 1975 to 1990. It remains unscathed by the culture of war. Its pedestrians turn a deaf ear to the sound of explosions in neighboring regions. The people of Damascus have learned a lesson from this civil war: One must pursue life, despite the hardships.

The Mezzeh region's people continue to lead their lives despite the ongoing war raging around them, and without concerns about tomorrow. Within the region, the regime has built a security area with intelligence-services buildings surrounded with concrete barriers that make up much more than military barracks. Not far away, there is a large supermarket that sells almost all essential goods. Bashar al-Assad came up with the idea of building this mall right after the West forced Syria to withdraw from Lebanon in 2005.

He wanted to send a message to the middle and upper of classes of Damascus to “forget about Beirut and its cafes. I will build for you another Beirut here.”

Cafe Sahara on Mezzeh Street continues to thrive. It is designed in a way that combines national heritage and modernity. The regular visitors of the cafe are usually men in their late 50s smoking shisha. Wealth has relaxed their features. Today, in a time of war, people of all ages and walks of life visit the cafe to enjoy the traditional tobacco waterpipe.

Smoking shisha is a shared habit between the people of Syria and Turkey, not to mention the coffee, known as "Turkish coffee," which is popular across Syria. Today, regime supporters in Cafe Sahara whisper in the ears of the waiters: "I would like to have some Arabic coffee. I do not want to call it Turkish coffee from now on." Among the greatest repercussions of the Syrian war is that it has rekindled animosity between Arabs and Turks, after Syrian-Turkish relations thrived and saw economic and social growth over the past ten years.

The controversy is not limited to the regime’s reaction to Turkish Prime Minister Recep Tayyip Erdogan turning against it. In fact, the strife has taken on a social and economic character. A Syrian dealer from Aleppo says he had good relations with Ankara: "I came to Damascus because my factory was destroyed there. A Turkish dealer bought its contents at a low price and moved them to his town!"

Today, Syria is beginning to realize the need for caution with the new Ottoman Empire. The countryside has been strangling the cities since last Ramadan, and the armed opposition groups have managed to establish a demarcation line with the capital. This line consists of the southern neighborhoods of the Damascus countryside. Ever since, that region has been a battleground. There is an equally poor Syrian-Palestinian demographic, and it is currently rising against the regime. This area includes the highly populated Midan neighborhood. Some of these populations were basically from historic Damascus, but the development over the recent decades prompted them to leave for the Damascus countryside, which was full of orchards before they settled there and developed their simple trade and agricultural economy.

The same goes for the Yarmouk refugee camp, which houses about 210,000 Palestinian refugees out of 440,000 in all of Syria, and the Kadam neighborhood, whose residents are Syrians displaced from the Golan Heights and other neighborhoods whose inhabitants say they are victims of forced migration. All of these neighborhoods provide a favorable environment for the more radical opposition groups, such as Jabhat al-Nusra.

In another area of the Damascus countryside, Daraya, the fighting rages night and day, leading gunmen to hole up in warehouses that were previously used for furniture, but have become barricades and tunnels connected with other neighborhoods in a state of revolt.

All of this is happening in the countryside — the towns of Daraya, Kadam, Douma and others. Meanwhile, the capital, which historically lies within its seven gates, hears the sounds of fighting but does not participate. Its countryside is angry with it, as is the case between Aleppo and Hama and their surroundings.

The current situation of the Syrian uprising is practically a story about the countryside's escape from marginalization. In this case, its enemy is not only the regime, but all of the cities' social and work relations that excluded them over the past 40 years. Add to this the fact that they do not support its revolution now. The city of Damascus is composed of Kassa, Maliki, Mezze and other affluent neighborhoods that were historically excluded — at the social and security levels — from the city's seven historical gates.

Life goes on in this region that has its own cold interests despite the war in the countryside. The people of Damascus, who are passionate about trade and profit, have become accustomed to a new commercial sector named the war economy. The top traders who did not emigrate have become engaged in chasing opportunities for wealth that are found among the debris of war and the collapse of the exchange rate.

“War and holiday” was how an employee of the Syrian Ministry of Information described last Christmas' special flavor. A Sunni Muslim married to a Syrian Christian, he lives in Kassa, which is known as an affluent Christian neighborhood. He said, "We spent the night in three restaurants, and we came back at the end of the night to our homes quietly. War did not reach Damascus. Here in Damascus, we have only felt the whole ongoing two-year war twice: first, when the opposition blew the sub-committee meeting of the crisis last Ramadan, killing four officers, and the second upon the arrival of the battle of Islamist militants to some Damascus neighborhoods and the airport road. In the two cases, it all ended within hours."

He concluded by saying: "The capital is living war under a microscope. It is to a large extent economically and psychologically affected. It is true that security forces are still in Damascus, but we have lost safety!"