How these Syrians went from opposition fighters to pro-regime militiamen

Some former members of the Free Syrian Army in southern Syria formed their own group that fights alongside the Syrian regime. 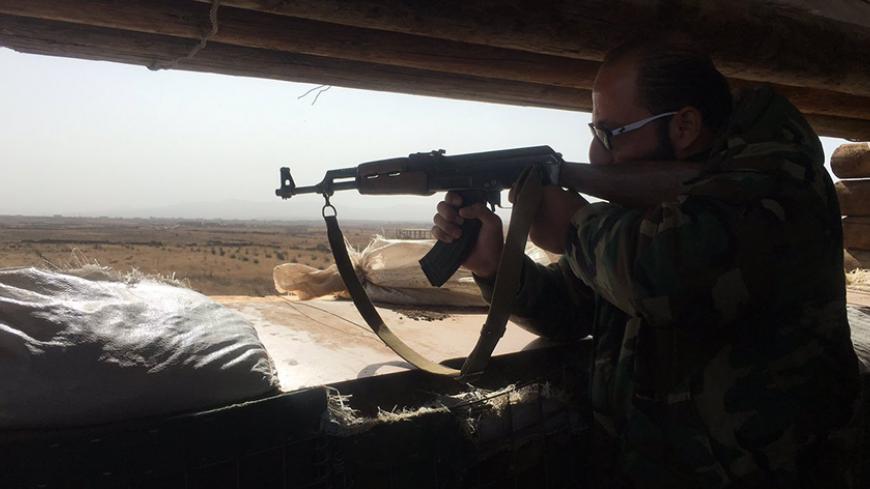 Majid Hammoud, a former Free Syrian Army commander and now leader of the Golan Regiment, looks out of a bunker. Posted March 19, 2017. - Twitter/Nour_Samaha

QUNEITRA, Syria — On March 19, an Israeli drone strike targeted and killed Yasser al-Sayed, a fighter with the little-known Golan Regiment, a faction within the pro-government National Defense Forces in Quneitra, in southern Syria.

While the reasons behind the drone strike are still shrouded in mystery — according to senior sources within the Golan Regiment, Sayed was a fighter with no particular rank — it briefly shone a spotlight onto a group that is somewhat unique in both its creation and its location.

The Golan Regiment came into existence in 2014; based in Quneitra province, it is the first pro-government armed group made up of former Free Syrian Army (FSA) fighters.

Following years of fighting against the Syrian army and its allies in one of the country’s most sensitive areas — Israel on one side, the Syrian army and its Hezbollah and Iranian allies on the other — dozens of FSA fighters sought amnesty from the government to then turn their weapons on those they previously fought alongside. Today, the National Defense Forces-linked Golan Regiment can be found fighting not just on the front lines in Quneitra and the Golan Heights, but also in Hama and Jobar in Damascus, fighting side by side with the very people they used to fight against.

Standing behind his desk in the group’s headquarters in Khan Arnabeh, Quneitra, Majid Hammoud cuts a formidable figure. In 2011, Hammoud, a soldier in the Syrian army, defected after consistently bad treatment by his superiors and the Syrian authorities. By the end of the year, he, along with his brother, had gathered several dozen men and other former army soldiers from his hometown and set up an opposition faction known as Liwa al-Mutasim, one of the numerous factions in the south that fell under the umbrella of the FSA.

“I was angry at the army and the police,” he told Al-Monitor. “My house was attacked by the authorities, and my brother, who was in the army at the time, was jailed for six months.”

He said, “We gave everything for the army, and no one cared about us, no one took care of us — that’s why I defected.” Many of those who joined him had the same issues with the security forces, while also swept up by the revolutionary mood that had taken the country.

Ahmad Kabboul, a former FSA fighter and now member of the Golan Regiment, told Al-Monitor why he defected from the Syrian army in 2011. “I was a soldier and I got injured in the leg while serving,” he said. “The army wouldn’t allow me to get the wound checked out and I suffered.”

He said, “At the same time I heard what Majid was doing so I decided to join him,” adding that his superior officer in the army was the main reason behind his defection.

As an opposition group, Liwa al-Mutasim operated in Jabata, Khan Arnabeh, Madinat al-Baath, Bir Ajam, Breika and the areas along the separation fence between Syria and the Israeli-occupied Golan Heights. Liwa al-Mutasim formed a loose coalition with other FSA factions in the area, and together they began to gain control on the ground, taking over towns and villages along the border.

But for Hammoud, there were question marks over some of the other opposition groups they were fighting alongside.

“Some groups wouldn’t even fight, they would come to the battlefield after the clashes had ended, take pictures and videos next to destroyed buildings and tanks, and then send them back to their financiers in Jordan or the Gulf states in order to collect their paychecks,” he said, referring to Alwiya al-Furqan, an Islamist group that operates in Quneitra.

“Others didn’t seem to have a problem working with the Israelis. In one commander's meeting with an Israeli agent, he promised help with refugees, medical aid, fuel, food, ammunition and logistics. In return, the Israelis wanted the opposition to stay on the Syrian side of the fence and not point its weapons toward Israel,” Hammoud noted. “I was shocked. For us, working with Israel is a red line.”

Jordanian-backed Southern Front sources told Al-Monitor that no relations between its factions and Israel exist, dismissing the claims made by Hammoud. “He is an opportunist and a liar,” said one military source. “He is a traitor and a regime agent.”

While the same sources do admit that Israeli aid — both food and medical — has made its way on a regular basis into opposition-controlled areas along the border, they deny it is through contact between their factions and Israel. “Israel is operating in areas where Jabhat al-Nusra and Ahrar al-Sham are in control, not the Southern Front,” the Southern Front source said.

For Hammoud and the other former FSA fighters, it was a combination of factors that convinced them to switch sides. They pointed to the corruption within the opposition groups, the fact they were being ordered to carry out battles according to the whims of their foreign financiers and the idea that some groups had few qualms about working with Israel.

It was at that point they decided to make contact with the government again. Toward the end of 2013, Hammoud got in touch with the mayor of Khan Arnabeh — a relative of his — asking to rejoin government-controlled areas. Following around eight months of negotiations between Hammoud and members of the security apparatus, dozens of fighters from Liwa al-Mutasim left opposition-controlled areas and handed themselves over to the government. Those who did not follow Hammoud merged with other opposition groups.

Today, the Golan Regiment operates in one of the most sensitive areas in Syria. Israel has made it clear it considers anything related to the Syrian government in the area a threat to its border, including the presence of its allies, whether it is Hezbollah or localized pro-government militias such as the Golan Regiment. In addition, an array of opposition groups — ranging from the Southern Front to more extremist elements such as Ahrar al-Sham and al-Qaeda-affiliate Jabhat al-Nusra — are of serious concern for the residents within government-controlled areas.

Jumping into an armored pickup, Hammoud and several of his fighters head toward an outpost belonging to the Golan Regiment. Hammoud pulls up to an abandoned, half-finished building site that has been refashioned and fortified into a military position. Sandbags and oil barrels line the floors, creating small windows just large enough for rocket-propelled guns to fit through. Suddenly, a barrage of explosions can be heard in the distance, close to the separation fence. The walkie-talkie crackles and a Golan fighter radios through, informing the fighters that armed groups have just hit residential buildings next to Khan Arnabeh.

Immediately a handful of fighters disappear in pickups, and soon the dull thud of outgoing rockets can be heard.

“We are good at what we do and the army relies on us to stop the opposition from penetrating the front lines in Quneitra, precisely because some of our groups used to be with the opposition groups,” said Mohammad Zeidan, a fighter who joined the Golan Regiment in 2014. “Majid and the others know who they are personally, know how they think and how they fight.”

He added, “This helps our fight against them."