The Golan Heights town of Hadar has been suffering essentially siege conditions throughout the Syrian war, surrounded by the warring factions and unfriendly neighbors and manipulated by aid from both the regime and Israel. 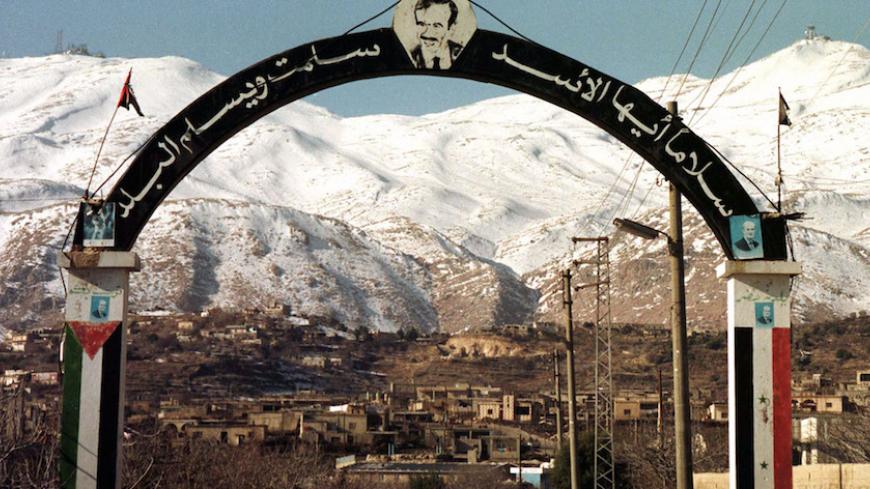 An image of Syrian President Hafez al-Assad sits at the entrance of the village of Hadar on the Syrian side of Golan Heights close to Mount Haramoun on Jan. 19, 2000. Assad died five months later and was succeeded by his son Bashar al-Assad. - REUTERS/Khaled Al Hariri

HADAR, Golan Heights — As the Syrian war continues into its seventh year with no sign of resolution, one town on the edge of Syria’s Golan Heights has had to fend off both opposition-led offensives and Israel's subjugation attempts over the last six years almost entirely on its own.

Hadar, a Druze town with a population of 10,000, according to local officials, has a unique story. Nestled on the Syrian face of Jabal al-Sheikh, Hadar directly faces the Israeli-occupied Golan Heights, where the Shouting Valley separates it by just a few hundred meters from the Israeli-occupied Druze town of Majdal Shams. A few hundred meters up Jabal al-Sheikh, perched on its peak, sits one of Israel’s largest military intelligence stations. It carefully monitors all activity in the Golan on one side and in Lebanon’s Shebaa and beyond on the other.

Hadar’s other neighbors are armed groups belonging to both the Jordanian-backed Southern Front and the al-Qaeda affiliate Jabhat al-Nusra, now also known as Jabhat Fatah al-Sham. Between them, they control the villages and the remaining mountaintops overlooking Hadar.

The only access to Hadar is a small dirt track that winds around the mountain from a government-controlled road. On a good day, vehicles struggle to pass through. A particular point on the 20-minute journey from the main road to the town makes travelers clear targets for opposition snipers positioned in the mountains. The track is forced to close by opposition attacks as well as severe weather, and in past years civilians have struggled to bring in goods to survive the harsh winter months.

The already sensitive area has become a tinderbox. Adding to the presence of the Israeli army and the various elements of the Syrian opposition, there are also government forces in the vicinity that are being aided by pro-government militias and the Lebanese armed group Hezbollah.

Everyone wants to co-opt Hadar to serve their own political agendas. “From [Lebanese Druze leader] Walid Jumblatt to Israel to the Syrian opposition,” said Abu Tawfiq, a sturdy-looking man in his late 40s who took up arms at the start of the conflict to defend Hadar from opposition attacks. His local armed faction, known as the National Defense Forces within Hadar, wield a melange of personal weapons from before the war and some others provided by the Syrian army. “But we don’t see ourselves as a sectarian militia, we see ourselves as Syrian citizens,” he told Al-Monitor.

Over the last six years, the opposition has attempted to woo the residents of Hadar away from the government with promises of protection and security, and when failing, resorting to attacks on the town. In one of the more recent opposition offensives on Quneitra province in September 2016, Hadar came under fierce attack by opposition fighters who while promising to not harm the residents continued to rain rockets on the town, killing several people.

“The opposition has asked us on multiple occasions to leave the government and to go to their side,” said Abu Tawfiq. Sitting on a wide balcony overlooking the town, he explained how the fighters there, a mere 800, are Hadar's only protection. While the Syrian army helps protect the road leading to the town, the residents are on their own. “We refused [to join the opposition] and they have launched rockets on us ever since, almost on a daily basis.”

Production of Hadar's famous apples, cherries and figs that were once widely distributed across Syria has dropped to a bare minimum. Resident Khalil Khayyal pointed to the wide fields and rolling hills surrounding the town. “The opposition controls those hills overlooking our farms, so it is impossible to go out and farm our produce. Sometimes we can go at night, but even that is not always safe because of snipers.”

Khayyal told Al-Monitor, “It is near impossible to leave the town unless absolutely necessary. It is the equivalent to being under siege.”

To make matters worse, some of the neighboring areas in government-controlled villages eye the residents of Hadar with suspicion. Historical rivalries between the towns make it easy for them to suspect the townsfolk of Hadar of having aided the opposition.

According to one fighter with a government-allied armed group from neighboring Khan Arnabeh, “I would never defend Hadar. Some of them helped the opposition when the opposition was targeting us,” he told Al-Monitor on condition of anonymity. “They would provide them with food and blankets. I won’t attack them, of course, but at the same time, why should I help them?”

Meanwhile, Israel has continued to pay special attention to Hadar, offering the residents aid and protection while publicly declaring Hadar a red line. In 2015 Israel promised aid to the opposition on the condition it would not touch Hadar. Prominent figures within the Israeli Druze community have been calling on Israel to intervene militarily to protect the Druze of Hadar from the Syrian government.

“Israel is constantly trying to communicate with our townsfolk,” said Abu Tawfiq, adding that the residents of Hadar fiercely reject the idea of receiving aid or opening communication with Israel.

For Israel, Hadar would be both a strategic win and a PR coup. Israel has been slowly creating a buffer zone in southern Syria to create distance between itself and the Syrian government forces and their allies. It started by giving military and logistical aid to the opposition groups along the separation fence and then provided covert medical aid to fighters. Now it has expanded its program to distributing food, clothing, educational materials and medical aid to the residents within opposition-controlled areas. Opposition commanders there acknowledge the aid, but claim they do not have any choice in accepting it.

Today Israel is very openly busing both civilians and fighters on an almost daily basis into Israel to receive medical care.

By including Hadar within its buffer zone, Israel is hoping to expand its control over the area. When it comes time to negotiate a political settlement, control over this area will be a valuable card for Israel to use. Furthermore, Israel is also using Hadar as a propaganda tool for its own public. By showing its concern for Hadar — which is within spitting distance of Israeli-occupied Majdal Shams — Israel is also demonstrating to its domestic audience its concern for their Syrian brethren across the border, especially the domestic Druze population.

In January, for example, a young boy from Hadar stepped on a suspected Israeli-planted land mine in the area around the town while tending to his sheep. Witnesses told Al-Monitor that Israeli soldiers crossed into Syrian territory to retrieve him, although official statements claim UN personnel moved him. He was then transferred to a hospital inside Israel without notification to or permission from his family. Druze leaders in Israel such as Sheikh Mouaffaq Tarif capitalized on the incident, visiting him in the hospital and publicly thanking Israel for saving his life.

According to residents in Hadar, they will not fall for Israel’s game. “We know Israel is backing the opposition that attacks us, and they are still occupying the rest of the Golan Heights,” said Abu Tawfiq. “For the last time, we would accept the hell of [Syrian President Bashar] al-Assad over the paradise of Israel.”