According to Syrian opposition figures, Israel is increasingly interested in creating a safe zone in southern Syria, and actions on the ground suggest that such a project may be underway. 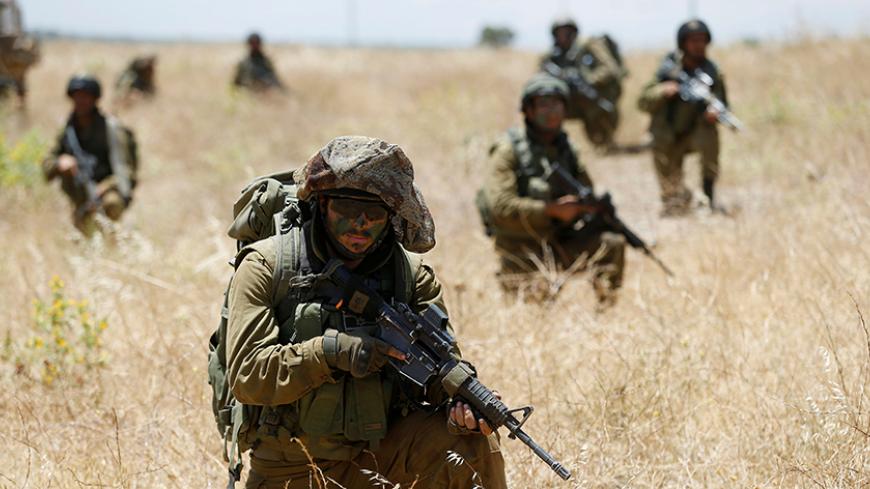 Israeli soldiers from the 605 Combat Engineering Corps battalion take part in a training session on the Israeli side of the border between Syria and the Israeli-occupied Golan Heights, June 1, 2016. - REUTERS/Baz Ratner

It began in May with the announcement of an Israeli liaison unit to coordinate with Syrian residents living in opposition-held territory in southern Syria, followed by the distribution of Israeli aid during Ramadan across 35 villages in the same area. Then on July 11, the Israeli army deployed several bulldozers and a tank 300 meters (328 yards) inside Syrian territory in Quneitra and began digging, threatening to shoot anyone who approached them.

Despite an official Israeli policy of non-involvement in Syria’s war — except for medical treatment for more than 2,000 Syrians, including fighters from al-Qaeda affiliate Jabhat al-Nusra — some Syrian opposition figures with strong ties to Israeli officials confirmed to Al-Monitor an increased interest in the creation of a safe zone in southern Syria. Actions on the ground are proving that such a project may be underway.

Kamal Al-Labwani, a Syrian opposition figure and strong advocate of the safe zone in southern Syria, has visited officials in Israel over the last two years. In his last visit in February, he noted a distinct change in tone within the Israeli decision-making circle.

“I was surprised that, at the Knesset, they said OK for the safe zone, and that if we asked for it, they are ready to help,” Labwani told Al-Monitor, adding that he met with several top-level officials and foreign diplomats to push forward the idea of safe zone.

Accordingly, in a meeting with the US ambassador to Israel, “He told me the Americans wouldn’t say no,” Labwani said, adding that when the proposal was presented to Prime Minister Benjamin Netanyahu, he “didn’t say no.”

According to Labwani, the proposed safe zone, approved by the Israelis, is supposed to run 10 kilometers (6.2 miles) deep into Syrian territory and approximately 20 kilometers (12.4 miles) along the border, starting just south of Hadar (a pro-government Druze village) to southern Quneitra, spanning over 17 villages, with a population of around 15,000 people.

He explained, “[The Israelis] said they would use their national security as a reason in front of the international community and that they want to protect their borders. Then the Jordanians and the Turks can do [their own safe zones], after the Israelis start it.”

The liaison unit first came to light in May 2016, with the purpose of coordinating humanitarian and medical aid for residents in southern Syria, in an effort to win over hearts and minds. The unit is reportedly based on Yakal, which was the Israeli unit created for south Lebanon during the Lebanese civil war as a mechanism to interact with Lebanese citizens and militias.

In 1975, at the start of Lebanon’s civil war, Israel began connecting with residents under what was dubbed the Good Fence Policy. According to Lebanese residents, Israel set up a network of collaborators and played up sectarian fears against the Palestinians. Within months, Israel created the Free Lebanon Army under dismissed Lebanese commander Saad Haddad. In 1980, when Haddad was old and sick, this force became the South Lebanon Army under Antoine Lahd. Its task was to target Israel’s enemies, Palestinians and Lebanese, and to pave the way for Israel’s invasion and subsequent occupation of south Lebanon.

A similar scenario seems to be taking shape in southern Syria 40 years later.

“Given its long history of relationships along and across its northern border, Israel is a perennial player and sees the southern Syria situation within its strategic parameters,” Robert Rook, the chair of the history department at Towson University in the United States, told Al-Monitor. Rook, who specializes in Israel and Syria, added, “Something akin to the ‘Good Fence’ arrangement is in place, and beyond the humanitarian and good PR, there certainly is intelligence to be gleaned in the process.”

According to Labwani, “When Israel helps the Syrian people in the south with aid and medication, they stop looking at Israel as the enemy and a threat. Today the atmosphere is very appropriate to do this.” He added that Israel operates a comprehensive intelligence-gathering and communication network across the south.

“People are poor now and hungry, so would work for anyone for a little money,” he said. “[Israel] has access everywhere and to a lot of information.”

Moti Kahana is the Israeli-American founder of the US-based nongovernmental organization (NGO) Amaliah advocating for the safe zone. Kahana, who works closely with Labwani, said the Israeli government has given him the green light to operate within the designated safe zone.

“We started working already,” Kahana told Al-Monitor from his office in New York. “So in the next few weeks, we will be bringing supplies into the safe zone of Syria.” He went on, “The Israeli government will allow us to bring humanitarian supplies to the Syrian people,” adding that Israel is “willing to allow an American NGO — which is us — to expand and bring in supplies.”

Kahana explained that the first stage is to bring in medicine and equipment, the second stage is to open schools and focus on education, and the third stage is to help create and equip a local police force. “We have identified which towns and villages we will be working in, but I cannot yet share their exact locations,” he said. He also declined to identify the opposition groups the organization is coordinating with.

And sure enough, following the establishment of the liaison unit, Israeli aid suddenly appeared in opposition-held areas. Abu Omar al-Joulani, spokesman for the Revolutionary Command Council for Quneitra and Golan, told Al-Monitor, “A network of collaborators working with the Israelis enabled this aid to come through from the occupied Golan Heights.”

He added, “We don’t know who they are, but they operated in the dead of the night and distributed the aid to 35 villages, including Saida el-Golan, Saida el-Hanout, Ghadir el-Bustan and El-Hisha,” which he said indicates a systematic distribution system with a wide reach across the territory.

There are around 14 brigades in the area, from the Free Syrian Army to Jabhat al-Nusra and Islamic State affiliate Shuhada al-Yarmouk. “None of these groups have a problem with Israel, and Israel doesn’t have a problem with them either,” Labwani said. “The problems are internal, between the different groups themselves.”

Issam Zeitoun, another Syrian opposition figure with ties to Israel, also confirmed a covert relationship between Israel and several brigade commanders, specifically those involved in the Jordan-based Military Operations Center. Zeitoun, the only Syrian invited by Israel to attend the annual security conference at Herzliya, is also pushing for an Israeli-sanctioned safe zone.

“I have worked for the last five years to open this closed window,” Zeitoun told Al-Monitor, referring to a partnership with Israel. “We have been brainwashed for decades that Israel is our enemy. It is not. In fact, it is the only one hitting our enemies.”

According to Zeitoun, the proposed safe zone “starts from Jbeta al-Khashab [south Hadar] and runs to Saida al-Golan and Tal Hara,” expanding it beyond the coordinates provided by Labwani and highlighting the areas in which aid from Israel was recently distributed.

For Israel, a safe zone in the area would be hugely advantageous. By creating a buffer where the Syrian air force cannot fly close to the border and Hezbollah cannot launch attacks on the occupied Golan, Israel is cementing its grip on territory its leaders claim belongs to them and should be internationally recognized as such.