Are Israel, Jabhat al-Nusra coordinating on attacks in Syria? 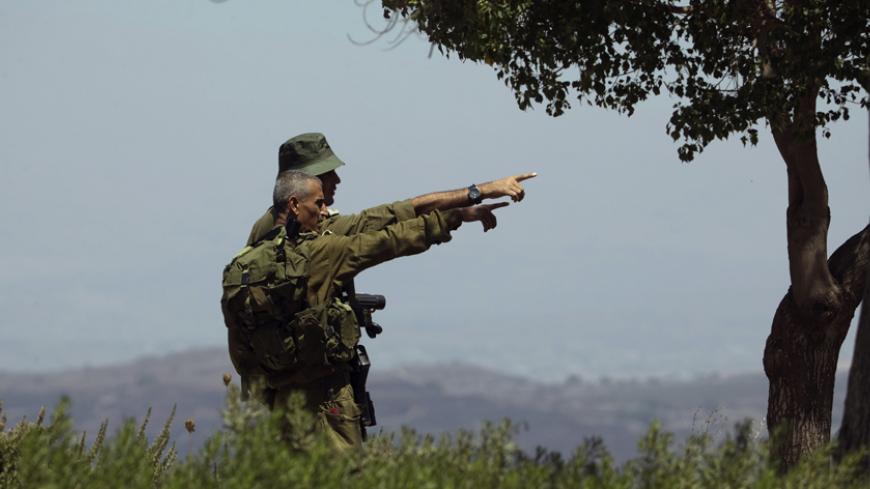 QUNEITRA, Syria — Since the start of the Syrian crisis, the Syrian regime has routinely accused Israel of playing a hidden role, from Qusair in the Homs countryside in May 2013 to the emergence and advances of the southern front in September 2014. UN reports published in December appear to vindicate the regime’s arguments that Israel is involved with the southern rebels.

According to a UN report covering the period from March to May 2014, the United Nations Disengagement Observer Force (UNDOF) detected contact between rebels and the Israeli army across the Golan cease-fire line, particularly during fierce clashes between the Syrian army and the rebels. The report also confirmed that the UN forces spotted rebels transporting 89 wounded across the cease-fire line into the Israeli occupied zone, where they were handed over 19 people who had received medical treatment in addition to two dead. The UN forces also noted that the Israeli army delivered two boxes to rebels on the Syrian side of the Golan Heights.

Communications increased between rebels and the Israeli army before the eruption of the southern front in Daraa and Quneitra in September, according to Quneitra opposition activist Mohammad Qasim, a pseudonym due to the sensitivity of the subject.

Qasim, who was active in a support capacity to the rebels during the September offensive, told Al-Monitor via Skype, “The battle to capture Quneitra on Sept. 27 was preceded by coordination and communications between Abu Dardaa, a leader of Jabhat al-Nusra, and the Israeli army to pave the way for the attack. And according to an FSA commander who partly participated in this battle, the Israeli army provided Abu Dardaa with maps of the border area and the Syrian army’s strategic posts in the southern area.”

The rebels’ battle, led by al-Qaeda’s affiliate Jabhat al-Nusra, to control the Quneitra crossing took place in coordination with the Israeli army through Abu Dardaa, according to Qasim. He added, “During the clashes, the Israelis heavily bombarded many of the regime’s posts, shot down a warplane that was trying to impede the progress of the fighters and targeted other aircraft.”

The media reported that on Sept. 23, Israel downed a MiG-21 Syrian military aircraft over the occupied Golan Heights during the intensification of fighting between rebel fighters led by Jabhat al-Nusra and the Syrian army.

Prior to this battle, Israel provided rebel fighters with communication devices and medical equipment, according to Qasim. He also said that the devices have improved communication among rebel fighters, while the medical assistance helped equip four new makeshift hospitals in Syria’s south and southwest.

Qasim added that Israel allowed the establishment of a small Syrian refugee camp on the border in the occupied Golan Heights, saying, “The camp hosts dozens of Syrian families, which was confirmed by UN reports, and Israel is providing it with the necessary humanitarian assistance. Rebel fighters — who frequently go to the Israeli zone …, some of whom have crossed the border more than three times a day — go to [this camp].”

On the transfer of Syrian wounded to the occupied Golan Heights, Qasim explained, “Any fighter or civilian with severe injuries who cannot be treated in our hospitals on the ground are immediately transferred to the Israeli part of the occupied Golan, and there, he will be transferred in a civilian ambulance accompanied by an Israeli army patrol to a hospital for treatment. Later on, the Israeli army will be contacted by the rebels to learn about the situation of the wounded there.”

The Syrian army in the area has also taken note of Israel’s assistance to rebels. The forces of Gen. Rami al-Hasan are stationed at the entrances of the town of Madinat al-Baath in Quneitra governorate. Armored vehicles, tanks and dozens of checkpoints are scattered around the city, which lies adjacent to rebel-controlled areas.

“The first outcomes of the cooperation between the Israeli army and the gunmen took place in Quneitra, when they took control over the border crossing. Back then, Israel supported gunmen by providing them with cover under the pretext of ‘shooting back,’ hindering any attempts by the Syrian air force to intervene and bringing down one of our planes. It has also provided gunmen with the necessary equipment to face the fortifications of the Syrian army.”

Hasan added, “Israel wants to exert control over the entire Golan, and contributed significantly to the intimidation of UN observers to push them to withdraw from most of their positions.”

On Oct. 4, rebel fighters and Jabhat al-Nusra captured Tal al-Hara in the northwest Daraa countryside, which is adjacent to the countryside of Quneitra. This significant victory could not have happened without Israeli support, according to Daraa opposition activist Ghazwan al-Hourani, also a pseudonym, who witnessed communication between Jabhat al-Nusra and Israel.

“Israeli support in the battle of Tal al-Hara was at a high level, and the Israeli army was the mastermind of this battle in terms of plans, tactics and follow-up. The communication devices released precise instructions in Arabic about what should be done by the fighters, moment by moment,” he told Al-Monitor.

Dozens of monitoring, broadcast and jamming devices as well as sophisticated radar equipment were found in the regime communication center in Tal al-Hara, according to Hourani, who added that the papers, maps and portable devices in the center were placed in closed box trucks and moved to an unknown destination by Jabhat al-Nusra.

The aerial reconnaissance station in Tal al-Hara, the last government reconnaissance center operating in southern Syria, was bombed by Israeli warplanes on Sept. 5, a month before the rebels captured it on Oct. 7. This cannot be considered a coincidence, according to Hasan.

“What pushed Israel to raid Tal al-Hara and to later order the gunmen to attack it was that this radar station was upgraded in 2012-2013 and again in early 2014 with new technology to expand the station’s sensing scope to the south of occupied Palestine, northern Saudi Arabia and Cyprus in the Mediterranean Sea, which the Syrian Ministry of Defense worked on in cooperation with its Russian counterpart. Israel wants to prevent the Syrian army from monitoring its movements in the occupied Golan, and to stop any attempts to intercept its aircrafts,” he said.

The general said that Israel is not only supporting the rebels militarily and logistically and treating their wounds, but is also training them in the occupied Golan. “We have delivered a complaint about this [training] camp to the head of UNDOF, and we threatened to target it. Yet the observers have not responded and the camp is still there.”

Qasim and Hourani were nervous about discussing this sensitive subject with Al-Monitor. Their interrupted talk, trembling voices and sudden breaks in communication whenever someone approached them underline the danger they face if they were found out to have revealed such details. They are in the same boat as many opposition activists working with rebel groups, who consider any cooperation with Israel a betrayal of the revolution’s objectives.