Many Circassians who lost their homes in Quneitra, Syria, opened their doors to Al-Monitor at nearby Madinat al-Baath, where they recounted their stories. 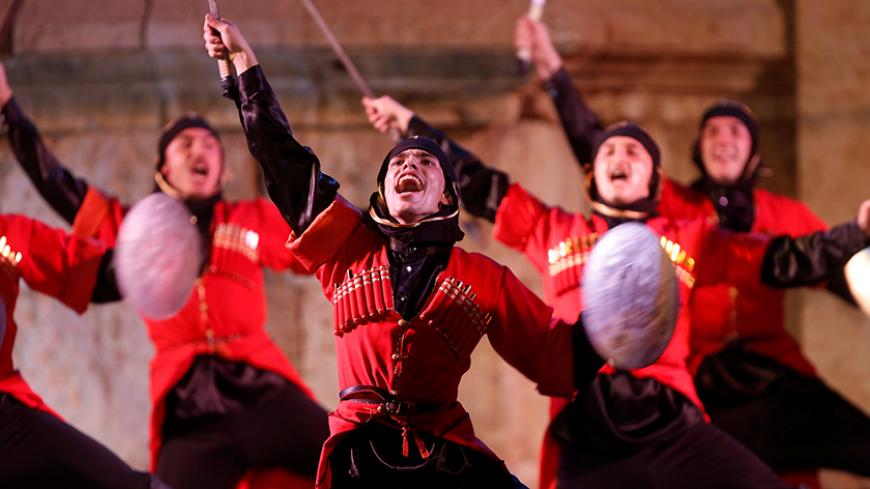 Dancers from the Ahli Club for Circassian Dance perform at the Southern Theatre during the Jerash Festival of Culture and Arts in the ancient city of Jerash, Jordan, July 26, 2016. - REUTERS/Muhammad Hamed

MADINAT AL-BAATH, Golan Heights — I traveled recently from Damascus to what used to be Quneitra via an alternative northern route instead of using the main road, which was under threat from multiple armed groups. Although I was told the northern route was now safe, the driver never lifted his foot from the gas pedal.

Syria's 1973 war with Israel was aimed at recovering the Golan Heights, which Israel had captured in 1967, but only Quneitra was liberated. The UN Disengagement Observer Force that was set up in 1974 to observe the separation area between Israel and Syria is no longer visible. Most of the outposts were abandoned under attacks by radical Islamic groups. The force is now slowly returning to its former area of operations, but everyone still has guns. On one side of the separation area are Israel and Jabhat Fatah al-Sham (formerly the al-Qaeda-affiliated Jabhat al-Nusra) and the local allies it supports. On the other side are the Syrian army and national defense forces such as Kataeb al-Baath.

Camp Zouani, the main UN base and crossing point to Israeli-occupied Golan, is abandoned. A pleasant Syrian guard allowed me to enter and showed me steel prefab buildings reinforced with rocks against mortar fire. There was not a single piece of furniture left in the barracks. All of it had been looted.

Israel razed Quneitra as it withdrew after the 1973 war. Not a single building was left standing. It is now preserved as an outdoor museum of Israeli aggression. Residents of the town were not allowed to return to their homes and are now living in Madinat al-Baath, also called Baath City and New Quneitra.

Madinat al-Baath, only 1.8 miles (2.9 kilometers) from the combat zone,  is now besieged by Jabhat Fatah al-Sham and its allies. Shehab Abaze, a farmer who lost his soldier son at Hama and who later took up arms himself and joined the defense forces, described the situation:

At night I was the guest of Circassians, the first group to come to mind upon hearing "Golan." They were brought to this area by the Ottomans to help secure trade routes and suppress tribal uprisings.

The biggest hospital in the town is named after Memduh Abaza, an air force pilot who became a legend in the war with Israel. During that war, the Circassians who lived in 13 Golan villages had to abandon them. Today there only a few Circassian villages such as Acem, Bariqa and Mudariye, which were captured by Jabhat al-Nusra in 2012. Circassians were caught in the middle of clashes between the Syrian army and Jabhat al-Nusra and 15 of them were killed.

Very few young Circassian men joined Islamist organizations. The rest remained neutral and showed their loyalty to the country. I personally witnessed in Damascus on many occasions how Circassians are held in high esteem by Syrians.

After a traditional Circassian meal at the house of Lamiya Golfesh, I went to Dr. Hussam Toghus’ residence for a chat. Toghus, a medical doctor, had worked with many projects in the Golan to clear mines, which have killed 300 and wounded 500 people. When their villages were evacuated, only 23 out of 52 families remained in Madinat al-Baath. Some moved to Damascus, but most went to Turkey or to their homeland, the Caucasus.

Circassian civil society in Syria played a key role in teaching the new generation its mother tongue and culture. The office of a nongovernmental charitable organization at Quneitra, the Circassian Benevolent Association, is open, but there is no activity. There are not enough children and young people to participate in activities anyway.

The third house where I was welcomed belonged to agricultural engineer Zhair Veccukh. In the middle of our pleasant conversation, doors and windows shook with nearby artillery blasts. When explosions break the glass, residents cover their windows with plastic sheets. The host said he initially was confused and fearful, but now he is used to the blasts, which happen less frequently now. A Turkmen neighbor said, “There are rockets that fall short in clashes [and land here], but there is also the occasional firing of rockets at us. After all, this place is called Baath and its residents are treated as pro-government shabiha militias.”

Felek Veccukh, Zhair Veccukh's wife, joined us while we were discussing how to keep the Circassian language and culture alive. She said, “Look, I am a Kabardeyi. My husband is a Sapsugh. We understand each other’s dialects. But we are the last generation speaking proper Circassian. My daughter can sing in Circassian but cannot speak it. We speak Arabic at home. That was our mistake. If we had continued to speak Circassian at home, the children would have picked it up also.”

Their daughter, Nancy Veccukh, is in college studying economics. She tries to stay attached to her roots by singing and attending Circassian dancing classes.

My conversation with Toghus and Zhair Veccukh on Circassian culture became lively. The text of the interview follows:

Al-Monitor:  You could teach in Circassian before. What happened?

Toghus:  The Circassian language school in the Golan was opened in 1936 during French rule. It was open for four years. We were not allowed to open another one. The language we learned was through our [own] efforts. We couldn’t bring teachers from the Caucasus. In 1948, a Circassian Benevolent Association was set up in Damascus. This was sort of a reward for the exceptional services Circassians provided during in the Palestine war.

Veccukh:  After the Golan war was lost, we as Circassians suffered a lot. We were expelled from our villages and scattered. Some went to … the Russian Embassy in Damascus to return to the Caucasus, but the response was negative. Then the US, on the condition that they would not ask for the return of their homes on the Golan, moved some Circassians to New Jersey to make life easier for Israel. The dispersal of Circassians meant serious erosion of language and culture.

Toghus:  Russians were always suspicious of relations with Circassians. This hasn’t really changed. Nowadays, Russians fear Circassians will import radical Islam from the Middle East to the Caucasus.

Veccukh:  When the Soviet empire collapsed, 1,500 people went back to the Caucasus, but that quickly became difficult to continue. The Russians were afraid of Islamist movements. The Russians don’t help us to live in the Caucasus. I have a friend who has to renew his residence permit every six months, every time with new problems.

Al-Monitor:  When Syria was being established, Circassians were seen as loyal subjects of the Ottomans. When some joined the colonial forces, they were labeled French loyalists. Arabs did overcome some of their suspicions of Circassians because of their bravery in the war against Israel. In 2011, Circassians were again caught between two fires and had to prove their loyalty to the dominant force. How does this affect you?

Toghus:  Circassians here are patriots. When the French came, we split in two. Some wanted to work with Arabs, obtain Arab identity and learn Arabic. Some of them favored going back to the homeland to learn our language, but most decided to stay in Syria and adopt a Syrian identity. This is how we became citizens, and served in the army like Arabs. We spoke Circassian only in our village. That is when the French set up an army. My father joined its Circassian cavalry unit. The French left and the Palestine war began. The Syrian army was not ready. Circassians actually trained the Syrian army; 80% to 90% of Syrian fatalities in the Palestine war were Circassians.

Veccukh:  In 1948, Circassians were not organized. Circassian Gen. Mahmoud Shatra came and told Circassians they would all be wiped out if they continued to fight as individuals. He made them join the army. That also built trust in Circassians.

Al-Monitor:  Did the number of Circassians in the army and bureaucracy decline in the era of President Hafez al-Assad and his son, current President Bashar al-Assad?

Veccukh:  Young people do not join the army as before, but they are still around. There are five or six Circassian generals in the army. Bashar al-Assad’s [former] Interior Minister Bassem Abdul Majid ..., who is now the Syrian ambassador in Belarus, is a Circassian. Awad Bagh, the chief of staff under Hafez al-Assad, was a Circassian.