If the Syrian regime army captures Aleppo, the Turkish border will come under heavy pressure. 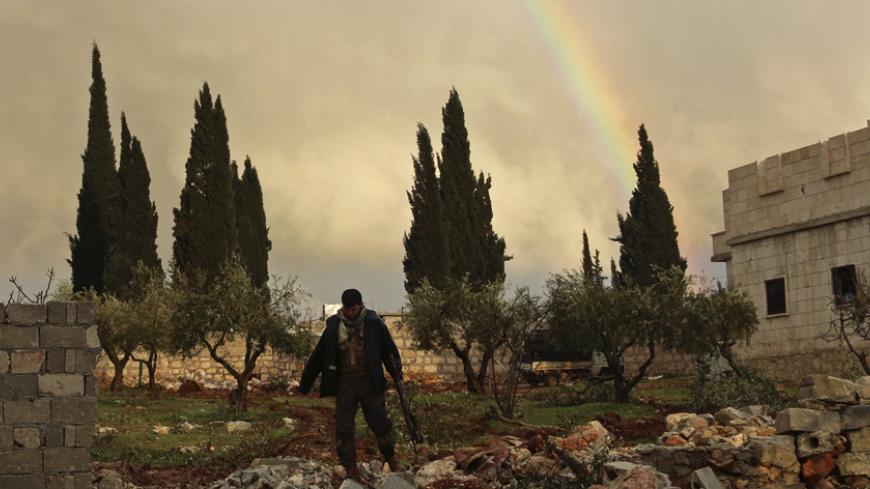 A rebel fighter carries his weapon as he walks in front of a rainbow in Ratian village, north of Aleppo, after what the rebels said was an offensive against them by forces loyal to Syria's President Bashar al-Assad, Feb. 18, 2015. - REUTERS/Ammar Abdullah

Ankara had been dreading this scenario. On Feb. 16, the Syrian regime army launched an offensive to besiege opposition-controlled areas of Aleppo, lifting the opposition's 18-month siege on two Shiite villages and severing the opposition's supply lines to Turkey. If Aleppo falls, the next front to intensify will be Turkey's border. Beirut daily Al-Akhbar reported the situation with the headline: “A blow to Ankara: Syrian army makes advances in Aleppo offensive.”

Following the offensive, many wondered what had happened to the train-and-equip program for the Syrian opposition. Tanju Bilgic, spokesman for Turkey’s Foreign Ministry, said Feb. 17 that the negotiations with the United States to train the Free Syrian Army (FSA) had concluded, and that an agreement on technical details would soon be signed and a plan implemented in March. US State Department spokeswoman Jen Psaki further said that an agreement on principles had been reached and would be implemented in March.

The train-and-equip program has been slow moving due to the United States' and Turkey's divergent priorities. While the United States insists that the fight against the Islamic State (IS) should be prioritized, Turkey still insists that first, Bashar al-Assad must go. Psaki admitted that the training program is focused on IS, but expects the opposition to also use their training and weapons against the regime. Does this mean that Ankara’s demand now has the upper hand? No signs indicate such a major change, just as there is little hope that the three-year training program will change much on the ground.

President Recep Tayyip Erdogan's obsession with changing the Syrian regime has badly crippled his relations with President Barack Obama. Nothing has been said to invalidate the remark of Michael Werz, a Turkey expert at the Center for American Progress, that "no one in the White House, the Department of State or the Pentagon is prepared to do Turkey any big favors these days."

Erdogan is impatient to start the train-and-equip program as soon as possible, so as to stop the Syrian regime from recapturing Aleppo, thus preventing opposition fighters from retreating to Turkey. The Syrian National Coalition (SNC), which Turkey hosts, has also pinned its hopes on this program. Nobody really expects an effective army to be set up in the short term. At its general assembly meeting in Istanbul on Feb. 13-15, the SNC approved the establishment of an army of 60,000 under Salim Idriss, the defense minister of the transition government. The SNC hopes that such an army could be established quickly via the train-and-equip program and other direct assistance.

Not easy for new army to make a difference

SNC member Ahmad Jakal told Al-Monitor: “Everyone has a different goal. There are differences in priorities of combating IS or the regime. This surely has an adverse effect on the process. At the beginning there was an agreement on training moderates, but there was no agreement how they would be selected and from which groups. This caused delays. Technical work on financing, training locations and intelligence aspects are complete. Turkey was insisting on selecting the trainees. This will be done jointly. Trainees will not be radically inclined with no relations to groups pursuing different goals. Moderate Islamists, secularists and those who believe in Syria will be trained.”

When I reminded Jakal that the opposition, over time, radicalizes and changes ranks, he said: "After four years, we now know who is who. It is not difficult to select. There are moderates who work on the ground and don’t switch ranks when under pressure." As for the program's chances at success, Jakal said: "I believe this program will make a difference in the near future. Because professional fighters coming from Iran, Iraq and Afghanistan are joining the regime forces, an immediate success is not possible."

Fevzi Zakiroglu, an opposition representative, told Al-Monitor: "If officers are trained through the train-and-equip program, the army has a defined budget and soldiers are paid regularly, it will be possible to bring to together myriad groups fighting under the FSA."

Will it be possible, I ask, to set up an army when the moderates are fragmented and groups like Jabhat al-Nusra are growing? Zakiroglu replied: "Of course Jabhat al-Nusra will not join our national army. But when salaries are paid regularly, the army will be more attractive. If resources are channeled to this one army, those running short on resources will join us. People will leave Jabhat al-Nusra. But there is an important reality. Over the past four years, both with the influence of Jabhat al-Nusra and as a natural outcome of war, people are more sensitive to religion. If you set up a secular and anti-Islamist army, the project will be stillborn. That is why we need a national army that is sensitive to Islam."

About 400 US military experts will train 5,400 fighters in programs lasting 8-12 months in camps in Saudi Arabia, Qatar and Turkey. The Turkey leg of the program will take place in Kirsehir, where 2,000 Syrian opposition elements will be trained.

Situation on the ground causes concern

Developments on the ground indicate that the train-and-equip program is not likely to produce an immediate solution. Regime forces, supported by Iran and Hezbollah, have made advances not only in Aleppo but also in Quneitra, Daraa and the Damascus outskirts of Eastern Ghouta and Douma. The northern front is under heavy pressure. If the regime succeeds in cutting the opposition's supply lines, as happened in Homs, the opposition may have to surrender.

Regime forces successfully entered the Shiite villages of Nubul and Zehra, which had been under opposition siege for 18 months. The main road from Aleppo to Zehra is not secure for either side. Due to the presence of regime forces in Zehra, the opposition has been unable to use this route in their supply runs to Turkey, and for this road to be secure for the regime, it has to control Hireytan and Hayan.

A parallel route to the east connects Aleppo to Turkey’s Oncupinar border crossing via Tel Rifat and Azez. Securing this route is now the regime’s top objective. When the regime army captured Sifat and Baskoy on this route, it meant the most important supply route had been severed. Although the opposition claims to have reopened the road with the support of Jabhat al-Nusra and the Islamic Front, this road cannot be considered secure for them.

The only supply route to Turkey that now operates with few problems is the road to the Cilvegozu border crossing in the Turkish town of Reyhanli.

The regime is concentrating an offensive in Kfar Hamra and Balermum to transform the opposition’s liberated zone between Leyramon and Handerat into an open-air prison. The situation of the opposition is critical. Nevertheless, the gains by the regime forces — though psychologically damaging — don’t mean an absolute victory. The opposition could resist for a long time by using its tunnels and side roads.

With the situation on the ground changing constantly, can 15,000 opposition fighters to be trained in three years provide a solution to the conflict?