The problem with the US-led coalition's "train-and-equip" program is not finding committed soldiers willing to fight but rather finding dedicated, capable leaders to command them. 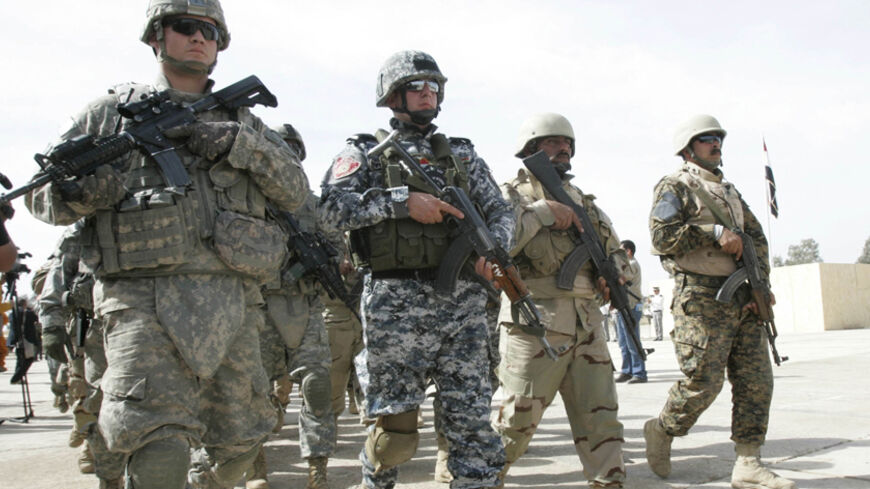 Military personnel and policemen march during a parade for their graduation ceremony in Kirkuk, Feb. 15, 2010. - REUTERS/Ako Rasheed

One of the most significant features of the US strategy to combat the Islamic State (IS) that Secretary of State John Kerry revealed at the end of September was “training and equipping local military forces" in Iraq and Syria. President Barack Obama's administration asked the US Congress for $500 million to train local forces. According to the plan, military training at the individual level will initially be provided to Free Syrian Army (FSA) fighters, Kurdish peshmerga and Iraqi Shiite militiamen. After these local forces prove themselves, the support would be expanded with the goal of stopping and then annihilating IS.

In the Iraqi arena, as was the case in 2006-2007, nine brigades of Shiite militiamen and three brigades of peshmerga would be formed as national guard units. The United States has allotted a fund of $1.6 billion to set up the brigades.

In Syria, the goal is to train in the first phase a force of about 2,000 personnel selected from the FSA and Syrian refugees in Turkey. Syrian fighters will be trained at the police academy in the central Anatolian town of Kirsehir. The United States will undertake equipping and financing the project, while training will be provided by Turkey.

According to reports leaked to the media, it is understood that the United States and Turkey are thinking of using these Syrian trainees to set up "safe havens" in Syria against IS and the regime.

Meanwhile, Turkey has already begun the training of Iraqi peshmerga forces. Turkish special forces have already trained 230 peshmerga troops, according to reporting during the recent visit of Prime Minister Ahmet Davutoglu to Erbil.

The “train-and-equip” strategy that is expected to last a year is already taking place in Qatar. Other reports speak of training by US special forces of Syrian opposition troops in Jordan and Lebanon.

Coalition countries led by the United States that are openly unwilling to engage in a ground operation have serious expectations from the "train-and-equip" program. Unfortunately, reports from the field are likely to demoralize the decision-makers, above all in Washington and Ankara.

Al-Monitor had an opportunity to talk to elite coalition soldiers who have been training peshmerga forces at Erbil and Syrian refugees in Turkey’s Gaziantep. Eye-opening revelations to Al-Monitor expose a serious chasm between expectations and the reality on the ground.

Until today, the priority of the train-and-equip program has been basic firing and combat techniques that make up a soldier’s basic military training. This is evident in the photographs appearing in the media. But such classic training alone is not adequate against the IS threat of a hybrid military doctrine that combines conventional operations and guerrilla techniques. According to military experts, comparing IS with the 2006-2007 Iraqi al-Qaeda, which concentrated on hit-an-run terror actions, is misguided, and combating IS requires extensive additional training. These experts say the basic military training of the local elements participating in the program is pathetically deficient, and because of the time spent to correct it, trainers don’t have the time to devote to training against IS specifically.

A military expert noted that a blend of training in armored combat, maneuvering at platoon-company levels and counterterror operations is vitally needed. Also sorely lacking but not being offered is training in urban cordon-and-search operations under covering fire and building-clearing operations.

Military experts also point to the minimal attention paid to training junior level leaders, saying what is seriously lacking in Iraq and Syria is not soldiers who will fight but junior level leaders who will command them. IS is said to have strategic superiority in this area, with many aspiring candidates. But for the moment, most local program participants have little interest in such training.

These experts also note how the train-and-equip training scheme is generally geared to defensive operations. They say it follows a philosophy of static military units who want to protect their own villages, towns and streets against the IS threat and as such, won’t be able to carry out battalion-level sweep operations. Most of these trainees are peasant-fighters who just want to defend their villages.

Because the train-and-equip program focuses so heavily on individual training, there is almost no attention given to brigade-level offensive operations planning and maneuvers.

Another point that worries military experts is whether these local forces, with their shortcomings, will be able to maintain the pace of combat against IS, which launches unexpected strikes and maintains a high combat intensity in fights.

Experts insist that to seriously challenge IS in Sunni regions and drive it out, there will be a need for battalion and brigade combat task forces that can handle guerrilla warfare and counterterrorism along with conventional offensives.

Military experts say one can begin to talk of the success of the train-and-equip strategy only when we see two developments: first, the announcement of a general who will command local forces in Iraq and Syria against IS, and second, published visual accounts of a live-fire exercise by a battalion that has completed its individual and unit combat training.

Otherwise, as long as all we see are photographs of trainers nonchalantly watching trainees firing from a prone position, to expect the train-and-equip strategy to achieve anything significant is but a pipe dream.