The Pentagon is sending more than $22 million to help Jordan outfit its emerging special operations command and quick reaction force. 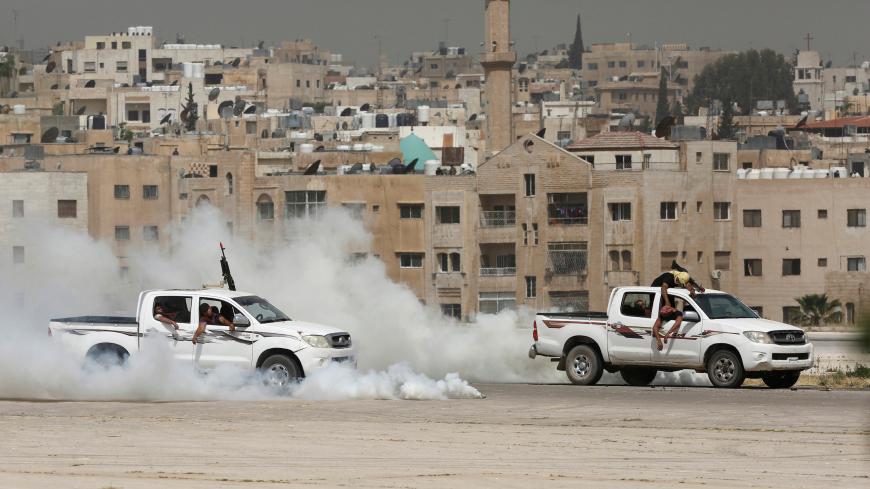 Jordanian special forces participate in an anti-terrorism drill during the opening of the Special Operation Forces Exhibition (SOFEX) at King Abdullah II Air Base in Amman, Jordan, May 10, 2016. - REUTERS/Muhammad Hamed

The Donald Trump administration is set to boost Jordan’s special forces after financial pressures led the US ally to hollow out elite units last year.

The Pentagon notified Congress last month of a new $22 million plan for Jordanian special forces, according to congressional notifications reviewed by Al-Monitor. The United States is expected to provide night-vision goggles and American-made sniper and assault rifles to Amman’s recently formed quick-reaction force.

The move is set to cement Jordan’s role as a hub in the Pentagon’s expanding fight against Islamic State networks and homegrown radicals after Amman inked a five-year, $1.275 billion-a-year memorandum of understanding with the United States earlier this year. It comes as Defense Secretary Jim Mattis seeks to refocus US military strategy on major geopolitical rivals such as Russia and China.

“Jordanian units should be capable of performing those missions even if US presence draws down,” said Melissa Dalton, a senior fellow at the Center for Strategic and International Studies, a Washington think tank. “It is a gradual and long-term process to build that capability, which the US and Jordan have been cultivating over a number of years.”

A spokesperson for Jordan’s embassy in Washington acknowledged the aid from the Pentagon’s in-house train-and-equip fund but did not respond to requests for additional comment. Some 2,800 US troops remain in the country to train Jordanian forces.

Last summer, Jordan deactivated its special operations command headquarters and stripped down the number of elite troops to a little more than 1,000, while putting an effective aviation unit back under control of the regular air force. The Pentagon aid provided in April also allows for $1 million in training on fixed-wing and rotary-wing aircraft for Jordan’s special forces.

“These reforms are about cutting the wheat from the chaff,” said William Wechsler, a former deputy assistant secretary of defense. In lieu of self-sufficient elite units, he said, the refinements are aimed at “forcing collaboration within the military so special operations has to go to conventional units for lift support as well as encouraging coordination with law enforcement and intelligence."

Despite financial uncertainty, Jordan has used its special forces as a public relations tool to trumpet its military strength.

Jordan’s struggles are not out of the ordinary. Building sustainable special operations forces is still largely a process of trial and error, even for wealthy countries such as the United States, experts say.

“Our whole modern approach to US special operations started with our failure at Desert One going into Iran in 1980. And the need to make wider reforms of the US military became clear given the range of problems that we encountered in Grenada in 1983,” said Wechsler, now with the Middle East Institute. “Unfortunately, too often it seems like you need to have these kinds of visible mistakes before people have the political will to fix things.”

Jordan holds major non-NATO ally status, making it a leading destination for excess US military equipment. Between 2016 and 2017, however, so-called green-on-blue slayings of US trainers by Jordanian troops outnumbered similar friendly fire deaths in Afghanistan.

Jordanian officials even initially blamed American soldiers for failing to follow security protocols after a guard gunned down three US special forces troops involved in the CIA’s Syria train-and-equip program at King Faisal Air Base in November 2016. A military court later found the soldier guilty of murder.

Elite troops also have a mixed track record in weeding out homegrown terror. A recent report from the Center for American Progress in Washington found that Jordanian special forces suffered serious communication breakdowns during a 12-hour raid on an Islamic State-linked residential building in the city of Irbid in March 2016.

Jordan’s special forces were once led by Abdullah himself. Experts say that in order to sustain its growing counterterrorism force against financial headwinds, Jordan’s military will now have to connect the reforms to a larger strategy.

“Remember, before he became king, Abdullah commanded Jordanian special forces,” said Wechsler. “This is very much associated with him personally. So people have questions as to why there isn’t a clear statement by him about the future of Jordanian special operations.”

The Pentagon also notified Congress of nearly $30 million in April for Jordan’s border guards and a battalion of marines.