US weapons pour into Lebanon amid turmoil

The Pentagon is sending armed helicopters to help Lebanon fend off terrorists despite budgetary and political uncertainty. 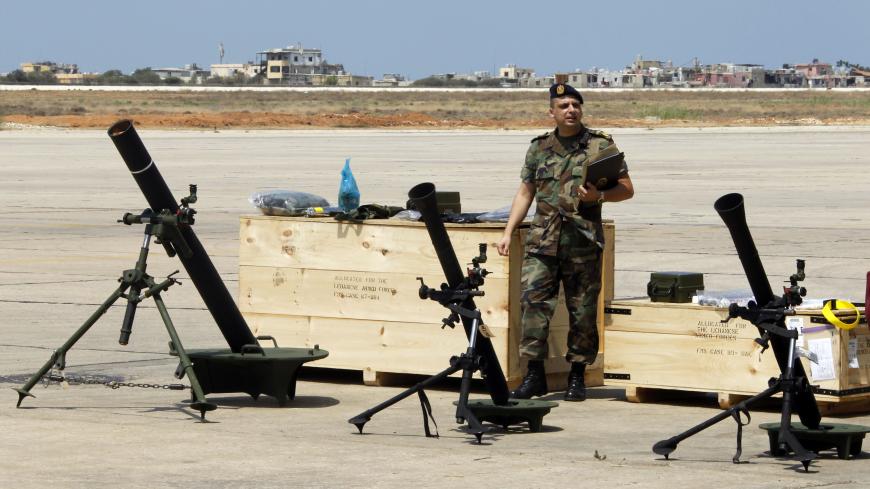 A Lebanese army soldier walks past weapons donated by the US government to the Lebanese army, during a ceremony at Beirut's international airport, Aug. 29, 2014. - REUTERS/ Mohamed Azakir

The Donald Trump administration is pouring new weapons into Lebanon despite US budgetary uncertainty and political turmoil in Beirut.

Robert Karem, the assistant secretary of defense for international security affairs, informed Congress in October that the Pentagon plans to supply the Lebanese Armed Forces (LAF) with six US-origin MD-530G light attack helicopters. The proposal, which also includes communications equipment such as radios, satellite navigation and transponder beacons, is estimated at $110 million, according to congressional correspondence reviewed by Al-Monitor.

The arms package aims to give Lebanese troops an edge against Islamic State (IS) fighters and other militants massing in the country’s northeastern border region. It is provided through a train-and-equip fund used to build up foreign militaries that has allowed the United States to continue to arm its Middle East partners even as the Trump administration seeks to curtail foreign military support traditionally handled by the State Department.

“It’s reassuring to see that the calculus hasn’t changed,” Alia Awadallah, a Middle East researcher at the Center for American Progress, told Al-Monitor. The new equipment, she said, “will go a long way toward improving [Lebanon’s] ability to tackle terrorist threats.”

The Pentagon has sent nearly $350 million to Lebanon through the program over the past three years, according to congressional documents analyzed by the Security Assistance Monitor. That includes more than $200 million approved by the Barack Obama administration, including Bradley fighting vehicles, machine guns and night-vision goggles for Beirut’s special operations teams. The Obama-approved assistance will also allow the LAF to fit recently delivered Super Tucano attack aircraft with smart bombs, hellfire missiles and guidance systems for rockets.

Pentagon officials also recently notified Congress of their plans to provide the LAF with an $11.25 million Scan Eagle, a surveillance drone that can help map out terrorist targets from the air. A small contingent of US special operations forces provide training to the LAF, but the Pentagon would not disclose their number.

The latest round of aid is part of a yearslong effort to boost LAF air power despite growing concerns that the Lebanese army isn’t as independent from Hezbollah as it claims to be. In a 2014 report, the US Government Accountability Office found that US Embassy officials in Beirut had not fully complied with Pentagon security checklists for weapons provided to the LAF, which critics worry could fall into the hands of the Shiite militia. For now, the Pentagon remains committed to empowering Lebanese government forces against Sunni extremists.

“These airplanes are not complicated; you can fly them six to 10 times a day,” said John Venable, a former Air Force colonel and now a researcher at the conservative Heritage Foundation. “They have the ability to precisely find and fix targets for air power. This is a huge benefit.”

The Pentagon go-ahead came just weeks before Prime Minister Saad Hariri mysteriously stepped down during a trip to Saudi Arabia on Nov. 4, citing the growing influence of the Iranian proxy in running Lebanon. Hariri reversed his decision 18 days later upon returning from Riyadh amid widespread accusations that Riyadh had forced him to resign. The Pentagon told Al-Monitor that the political turmoil in Beirut would not impact US weapons supplies.

Surging weapons assistance to Lebanon from the Pentagon comes as Trump’s State Department has hinted at across-the-board cuts to annual foreign military financing grants. Secretary of State Rex Tillerson’s budget request for the current fiscal year, for example, slashed weapons aid to Lebanon from $105 million to zero, part of a $500 million global cut. The Pentagon’s train-and-equip authority could fill in the gaps while drawing less public scrutiny than the State Department accounts.

“What the Obama administration did was [filter] everything through the State Department,” Venable told Al-Monitor. “Approval [now] is going to go through much faster.”

Total US security assistance funding to the LAF through State Department and Defense Department accounts has totaled more than $1.4 billion since 2005, according to US Central Command. That includes $160 million just in the past year, US Ambassador Elizabeth Richard said at an event marking the first-ever delivery of Super Tucano attack aircraft in October. With the Trump administration preparing to unveil an arms sales policy that promotes American manufacturers around the world, the United States appears in no rush to stop providing weapons to the Middle East.