Have GCC countries turned their backs on Jordan?

Despite reform efforts, the Jordanian economy continues to underperform, and foreign assistance to fill in gaps and counter this trend is growing scarce. 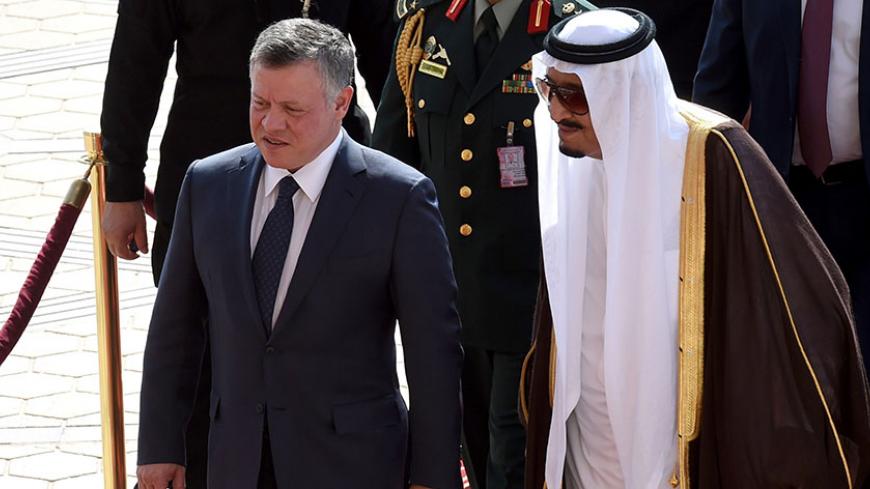 For almost a decade now, successive prime ministers have warned Jordanians that their country faced difficult economic conditions and that they should be patient as the government adopted stringent measures — such as lifting subsidies on essential goods, raising utility rates and increasing the cost of public services — in attempts to reform the economy.

Despite more than two decades of submitting to International Monetary Fund (IMF) dictates and numerous economic reform programs, the Jordanian economy continues to underperform, especially in the past five years, forcing the government to rely on local and foreign borrowing and on financial aid packages, primarily from the United States, the Gulf states and European countries. In July 2016, Jordan signed on to a 36-month IMF program providing it access to $700 million in loans.

Despite adopting unpopular economic measures, state budgets continue to produce endemic deficits — $1.2 billion, or 2.8% of gross domestic product (GDP), for 2017 — while the total debt-to-GDP ratio has surpassed the 90% mark, with debt at more than $35 billion. Although on Jan. 23 the parliament's House of Deputies approved the controversial 2017 budget, which seeks to raise $643 million in additional taxes and tariffs, it is unclear how these measures will be received by Jordanians at a time when many economic sectors continue to suffer and unemployment and poverty rates continue to climb. The latest unemployment statistics show an increase in 2016 to 15.8%, from 14% the previous year, while the poverty rate stands at 14%.

While the IMF has cheered Jordan’s adherence to the unpopular reform plan, it has also acknowledged that economic growth has been stagnant, around 3% annually in the past four years, way below the average of 6.5% achieved between 2000 and 2009 and less than the goal of 4.5% projected for 2015-16. Making things worse is the spike in the kingdom’s population, estimated at 9.5 million — of which only 6.6 million are Jordanians — according to the 2015 national census. The increase is mainly due to the influx of 1.2 million Syrian migrants, including 600,000 registered refugees, since 2011. The annual cost of hosting more than 630,000 registered refugees was estimated by the World Bank to be more than $2.5 billion for 2016.

What could make 2017 an exceptionally challenging year for Jordan’s economy is fear of a major decline in the flow of international aid, especially from the oil-rich Gulf states. Despite repeated pleas from Jordanian officials, the Gulf Cooperation Council (GCC) has failed to renew a five-year, $5 billion aid package to Jordan adopted during the Arab Spring, in 2011. The grant expired at the end of 2016, and there are no signs that the GCC is planning to extend it.

Furthermore, Jordanians have been waiting for implementation of a multibillion-dollar investment fund from Saudi Arabia agreed to in August 2016. No projects — supposedly in the energy, tourism and infrastructure sectors — have yet been announced.

Amid this gloomy outlook, it was a shock to Jordanians to see the kingdom’s highest-ranking Islamic cleric, Ahmad Hilayel, pleading for urgently needed assistance from the Gulf states in a televised sermon Jan. 20 during Friday prayers. “Things have reached a boiling point with us,” Hilayel, Jordan's chief Islamic jurist, known for his close ties to the royal palace, said in addressing Gulf leaders. “Your brothers in Jordan are facing danger all around them; where is your help? Where is your money and where are your riches?”

Hilayel's speech was widely criticized, especially on social media, for demeaning Jordanians and for chastising the Gulf states, some of which employ hundreds of thousands of Jordanians and have huge investments in the kingdom. As the uproar over the speech percolated, it raised questions about whether Hilayel could have delivered such a strong message without the consent of state authorities. Two days after Hilayel's sermon, he was replaced. Governments spokesman Mohammad Momani was quick to underline in a Jan. 23 television interview that Hilayel had been a public servant but that his sermon had been an expression of his opinion.

A day earlier, on Jan. 22, Al-Rai had reported that Saudi King Salman bin Abdul-Aziz Al Saud would meet with King Abdullah in Amman two days prior to the convening of the annual Arab summit in the Jordanian capital March 29. The meeting is to focus on, among other things, Jordan’s urgent financial needs and the launch of projects under the Saudi-Jordanian investment fund, the paper said.

Following the Hilayel affair, Prime Minister Hani al-Mulki appeared on state television, on Jan. 27, to assure Jordanians that the national economy was sufficiently robust and that the current crisis would be managed through continued reform, cancellation of all subsidies and tax breaks in addition to austerity measures. He also said that the government was continuing to negotiate with the GCC in an effort to renew its grant package to Jordan.

The government's economic measures have come under scrutiny by deputies and commentators for relying almost entirely on the levying of taxes on citizens. The government was also accused of failing to tackle corruption and reduce government spending. Economic columnist Khaled al-Zubaidi criticized reliance on the IMF, whose measures, he said, “have deepened the current crisis and failed to deal with unemployment and poverty.” He told Al-Monitor that the problem involved successive governments having been unable to address the core trouble spots in the Jordanian economy, including cutting the size of the foreign labor force, providing real incentives to economic sectors, downsizing the public sector and investing in infrastructure.

Economic expert and former banker Mifleh Akel blamed regional conditions for exacerbating the current crisis. Discussing the cause of stagnant growth rates, he told Al-Monitor, “Our borders with Syria and Iraq are closed, and we had to receive hundreds of thousands of refugees, and we remain in the center of regional turmoil.” Akel also noted that Jordan has been affected by the decline in oil revenues, which has reduced the flow of aid from the Gulf countries. He added, “Jordan cannot carry out needed economic reforms without the help of the IMF. We need them to control our total debt burden and bring it down to acceptable limits.”

Political columnist Fahd al-Khitan told Al-Monitor that Jordanians are under pressure as a result of the bad economic conditions and stated, “Trust in government policy is at a low point.” He also said, however, that he does not foresee a situation where Jordanians will take to the streets in protest. “Jordan will not be left alone to face these conditions. It has the support of the United States, Europe and Saudi Arabia,” Khitan asserted.

With the economic woes facing donor countries in the Gulf and Europe, and with a new administration in Washington that has a strident view of how the United States should spend its taxpayers' money abroad — Jordan was the fifth-largest recipient of US aid in 2016 at around $1 billion — 2017 will prove to be a particularly challenging year for the kingdom. How Jordanians will react once the government begins implementing tough measures remains an unknown but obviously important issue.