Under an agreement signed with the IMF, Jordan is seeking to raise additional revenues, raising fears about the worsening economic situation in the kingdom. 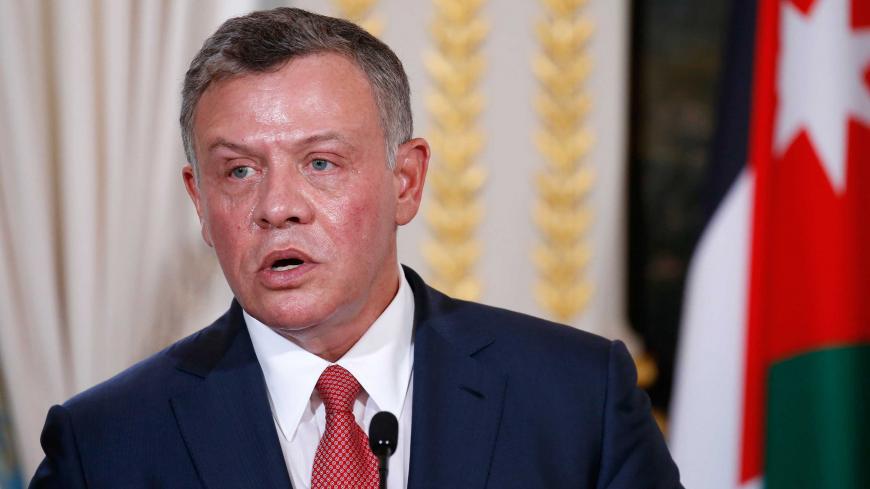 Jordanians are bracing themselves for tougher days ahead as the government seeks ways to raise additional revenues to support its treasury in 2018, in accordance with an agreement with the International Monetary Fund (IMF). In an interview with the official news agency, Petra, on Sept. 13, King Abdullah II said that Jordanians are facing hardships due to economic challenges and that “the reality everyone has to understand is that no one is going to help us if we do not help ourselves first. We have to rely on ourselves, first and foremost.”

Local observers took this statement to mean two things: that the king supports the government’s policy under a controversial economic reform program with the IMF, and that the kingdom could no longer rely on grants coming from oil-rich Gulf countries.

A five-year, $5 billion Gulf Cooperation Council grant that was awarded to Jordan in the wake of the Arab Spring in 2011 expired last year, and there are no signs that it will be renewed. Qatar had failed to pay its share of $1.25 billion.

Under the 36-month agreement approved by the IMF in August 2016, Jordan would receive about $723 million in loans over three years to support the country’s economic and financial reform program. Under the program, the Jordanian government is expected to adopt fiscal measures to lower public debt, currently standing at 26.2 billion Jordanian dinars (around $37 billion), constituting 94.1% of gross domestic product (GDP), and broaden structural reforms to trigger economic growth. Despite a previous agreement with the IMF that expired in August 2015, state budgets continued to suffer from deficits — $1.2 billion, or 2.8% of GDP, for 2017. Experts now agree that the declared target for the local treasury to achieve a surplus by 2019 may not be realistic.

One source of additional revenue could come from limiting income tax exemptions; as it is, the overwhelming majority of Jordanians do not pay income taxes. While it is unclear exactly what changes will be proposed to the income tax law, public reaction has been furious. Politicians and commentators have warned that changes would wipe out the middle class and hurt the poor. But the king, in his recent interview, said, “The difficult conditions and challenges our economy has encountered over the past years have taken a heavy toll on the middle class, and increased unemployment and poverty. Accordingly, I directed the government to ensure that its measures would not affect middle- and low-income families, but to protect and support them throughout the implementation of financial reforms in order to overcome the challenges that face us.”

To boost revenues — aside from those coming from the above-mentioned new tariffs and taxes, which experts say have contributed to sluggish economic growth — the government's only option seems to be to collect more income taxes. At the end of a two-day visit to Jordan on Sept. 21, the head of the IMF's Middle East and Central Asia Department, Jihad Azour, told local journalists that the IMF had asked the government to expand the category of those eligible to pay income tax, but did not specify which categories.

He was quoted on the same day by the official news agency as confirming that the fund had asked the government to reform the tax system, control tax evasion and redistribute tax burdens, adding that the current system was “too generous in allocating exemptions.”

Business columnist and editor of the Maqar.com news site Salameh al-Darawi told Al-Monitor that under the current law, almost 84% of public and private sector employees do not pay income tax because their monthly salaries do not exceed 500 dinars. According to the World Bank, Jordan’s GDP per capita is about $4,000.

But Azour also said that economic growth rates remain below expectations, at 2.3% by the end of the year, while the unemployment rate stood at an unacceptable 18%. The IMF’s unusual transparency was commended by local commentators, while the government was criticized for failing to open up to the public.

Chief editor of the influential Al-Ghad daily Jumana Ghneimat wrote Sept. 21 that the government’s discretion and secrecy are both uncalled for and unjustified. She added, “Tension is building between our government, whose belief is unwavering in the fund’s experts, and the people — who cannot handle, and oppose, further taxes.”

Ghneimat wrote, “While Jordanians view the fund as the devil taking away their hard-earned salaries, the truth is not entirely so. We need to admit that our governments have played no small part in our economic and financial downfall. In fact, consecutive governments have drained our funds dry and led our resources to waste.”

Her acrimony echoed the public’s growing impatience with both the government and the IMF’s bitter medicine. Jordanians have been asked to tighten their belts for over a decade now, with conditions getting worse rather than better. Regional turmoil has made the task of economic reforms more difficult, especially after the kingdom was forced to receive about 1.3 million fleeing Syrians, adding a whopping 20% to Jordan’s population, which now stands at 9.5 million. But Jordanians complain of rampant public sector corruption, bloated bureaucracy and mismanagement of public corporations.

Former Deputy Prime Minister Jawad al-Anani believes the government should heed the king’s message of self-reliance and cut ties with the IMF altogether. He told Al-Monitor, “Our dependence on Gulf aid has come to an end and we only have US and European aid now, which does not cover our public expenditure.” He said five years of working with the IMF under the previous government and one year under the current one to reduce debt as a ratio of GDP from 95% to 77% have proved to be a failure.

“We should forget about the IMF and choose growth over reforms by increasing annual growth from 2.5% to 5%,” he said. “Only then would public debt be reduced and that can only be done by boosting exports, reviewing imports’ policies and encouraging investments because people cannot endure more taxes."

But economist Fahed al-Fanek said the storm over the income tax law is not the issue. “It is whether we continue with the IMF or not,” he told Al-Monitor.

“Our choices are limited and people believe that the IMF agreement seeks to reduce public debt when in fact what the reform program foresees is that debt will be allowed to rise at a rate lower than the rate of GDP growth. That way, debt will decline as a ratio of GDP even though it will have risen in absolute figures,” Fanek said.

In his view, the real problem the government should worry about is foreign debt. “Foreign currency debt, which is now around 10 billion Jordanian dinars, is almost equal to the reserves of the Central Bank in foreign exchange,” he said. “Local debt in dinars is simply an internal affair. Jordan would be lending to itself.”