Jordanians say the new draft income tax law is too similar to the one that brought down the last government in May. 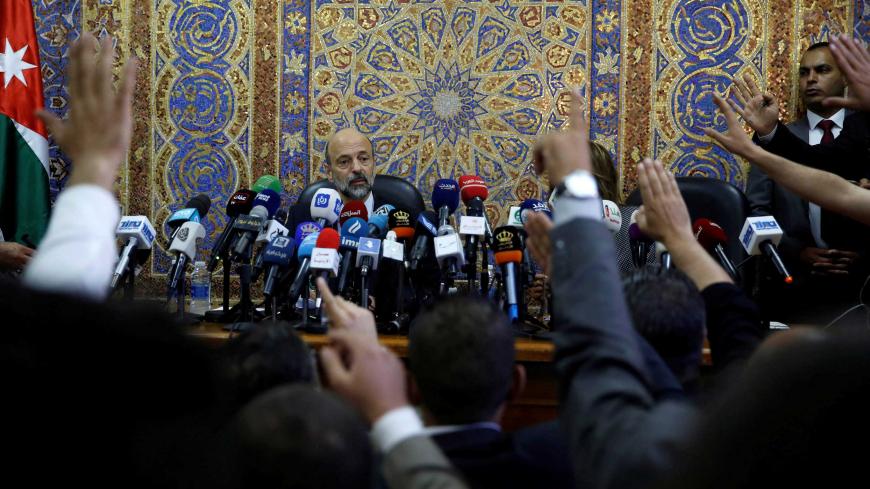 Omar Razzaz was sworn in as Jordan's new prime minister on June 15 after a week of nationwide protests against a controversial income tax bill that ended in the dismissal of the government of Hani Al-Mulki. Three months later, Razzaz is now facing harsh criticism over a new draft of the same law, unveiled Sept. 11 following intense deliberations with the International Monetary Fund.

Passing a new income tax law that expands tax brackets and controls tax evasion is part of a fiscal reform program with the IMF intended to offset Jordan’s budget deficit and facilitate foreign loans to support the state treasury.

Razzaz was quoted by the Jordan Times on Sept. 11 as saying, “The amended tax law was not imposed by anyone or any entity, whether from inside Jordan or outside.” He went on, “It is not easy to sell the law to the public in light of the current difficult economic conditions and we stress that it [will affect] well-to-do companies and individuals.”

The draft law seeks to generate 280 million Jordanian dinars ($395 million) in additional revenues in 2019, of which 180 million dinars ($253 million) will be collected as a result of expanding the tax base, while the rest will come from containing tax evasion. But critics wasted no time in pointing to similarities between the proposed draft and the one that Mulki’s government had referred to the parliament in May.

It also maintained the income tax rates on heavy industry and mining that were raised by the previous government, while hiking them for telecommunications and electricity companies. Ironically, it lowered a proposed tax rate on the banking sector from 40% to 35%, only to promise to raise it again to 38% after coming under public pressure.

The draft law is expected to be sent to the Lower House in a few days, but the parliament will not debate it until it convenes in November. Negative reactions to the draft bill have prompted the government to initiate a series of discussions with citizens in various governorates. On Sept. 16, a ministerial delegation was heckled amid calls for the government to be sacked by angry residents of the Tafilah governorate in southern Jordan. Similar boycotts took place in Mafraq and Ma’an a day later. And in Zarqa on Sept. 19, ministers had to call the dialogue off after verbal altercations with an angry public.

In all these meetings, citizens called on the government to concentrate its efforts on fighting corruption and repatriating billions of dinars from corrupt officials instead of relying on the peoples’ pockets to raise additional income. Jordan’s economy has been under pressure for years due to regional crises and economic mismanagement by former governments.

Research published May 15 by the Center for Strategic Studies at the University of Jordan showed that “income tax levels in Jordan are lower than international levels, but the tax burden is larger than that at the world level,” noting, “The tax burden was 15.5% last year.” The three-month study concluded that a new income tax law should take into consideration the entire tax system to avoid overtaxation and negative impacts on economic growth.

Critics of the proposed law believe that it will hurt middle and low-income Jordanians. They point out that someone whose monthly salary is 750 dinars ($1,000) will end up paying between 5% to 10% income tax, while pensioners making 3,500 dinars ($4,900) will be exempted.

In addition, the proposed draft does not differentiate between a family of two and larger families in terms of exemptions, especially now that education and health deductions have been removed. The government said that it will study the possibility of tying exemptions to family size.

Business columnist and Maqar editor Salameh Darawi pointed out other irregularities in the proposed law that could end up hurting the investment environment. In a Sept. 18 article for Addustour, he wrote that in special development zones designed to encourage businesses to invest in less developed governorates, the tax rate will jump from 7% to 20%. “How would the government be able to convince future investors to invest in governorates without offering incentives? And what would happen to someone who has already invested based on reduced tax rates?” he wrote.

Darawi criticized another article that calls for free zones to pay 6% income tax on foreign exports and up to 20% on exports to local markets. “Free zones all over the world are tax-free. This is what is meant by free zones,” he added.

The largest cell phone operator in the kingdom, Kuwaiti-owned Zain Co., expressed in a Sept. 17 statement concerns that the new income tax bill will affect the telecommunications sector. It said that for every dinar that consumers spend on telecommunications services, the government levies over 65% in fees and taxes, the highest in the world.

Meanwhile, professional unions, whose rejection last May of the previous draft law triggered nationwide strikes and protests, have yet to declare their position. So far they have refused to meet with the government to discuss the new draft. The largest opposition bloc in parliament, the Reform Bloc, called on the government to adopt a wide-ranging tax reform plan. A spokesperson said on Sept. 12 that it will work with other blocs in parliament to oppose the proposed bill.

On Aug. 3, Deputy Prime Minister Rajai Muasher, who drafted the new law, said once the government approves it, it is the responsibility of the parliament to initiate dialogue over the proposed bill. But following the negative reception of the draft law by the public and by representatives of various economic sectors, the government may introduce further amendments to avoid a clash with deputies.

Despite the public outrage, there have been no calls by parties and professional unions for protests. But the government is walking on thin ice and an unpopular parliament may seek to regain credibility by voting down the new bill, thus putting the kingdom on a collision course with the IMF and international creditors.