Jordan’s King Abdullah II has accepted the resignation of the prime minister in a bid to appease the Jordanians who have been protesting IMF-backed austerity measures. 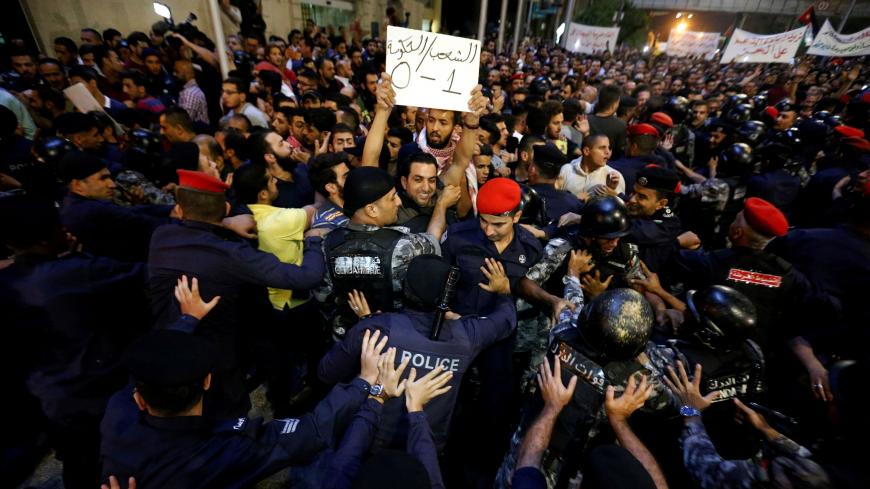 The past week has been like no other in the recent history of Jordan, with massive public demonstrations leading to the forced resignation of the prime minister. Spontaneous protests broke out May 31 after the government approved a sharp hike in fuel prices by an average of 5%. The day before, thousands of Jordanians observed an unprecedented general strike called for by the kingdom’s powerful professional associations to protest a controversial income tax bill. The government of outgoing Prime Minister Hani al-Mulki, which had sent the legislation to parliament without allowing public debate, had been under public pressure for months since it passed a contentious 2018 state budget, lifted subsidies on bread and imposed a sales tax on essential goods.

Since May 31, Jordanians, mostly young men and women, have been taking to the streets in the capital Amman and other cities across the kingdom, demanding the sacking of the government and rejecting its austerity measures. Largely peaceful in nature, with few injuries and arrests, thousands of protesters were prevented from heading to the Prime Ministry in west Amman by anti-riot police who were lauded by citizens on social media for their discipline. While the state-run media avoided coverage of the mass protests, protesters took to Facebook and Twitter to broadcast live scenes of the nightly rallies.

King Abdullah II intervened on May 31, ordering the government to freeze the fuel price hikes. Chairing a National Policies Council meeting on June 2, he called on the government and parliament to lead a comprehensive and rational national dialogue to reach a consensus on the income tax draft law that does not drain the public, combats evasion and improves efficiency of tax collection. He also said that it is unfair to force citizens to bear the burden of financial reform.

But the leaderless protests continued, with many thousands joining every night, insisting that the government be fired and the proposed law withdrawn. By June 3, it became clear that the political crisis has deepened. The speakers of the bicameral legislature, which was not convened, sought to provide the royal court and the government with a way out. They suggested that an extraordinary session be convened within days so that both chambers can reject the proposed bill.

Until he was asked to resign, Mulki rejected calls to withdraw the draft law. It said that it was under pressure from the International Monetary Fund (IMF) to introduce a new income tax law that would broaden the base of taxpayers and limit tax evasion. A three-year agreement with the IMF signed in 2016 stipulated that the government adopt certain austerity measures in exchange for a $700 million credit line.

By the late evening of June 3 and as protesters resumed their nightly rallies, it became clear that the king had to defuse the crisis. News that he had summoned Mulki to meet him the next day spread like wildfire. On June 4, he accepted Mulki’s resignation and a day later, he asked former Minister of Education Omar Razzaz to form a new government. Razzaz, a long serving civil servant, enjoys both credibility and integrity in the public eye, but he is assuming office at a time when the economy is in dire straits. He will face a huge challenge in meeting the IMF demands while attempting to appease an angry citizenry. Unemployment has increased to 18%, the poverty rate to 20% and government debt has reached almost $40 billion or 95.6% of the country’s gross domestic product, raising fears that the kingdom is sliding toward insolvency.

After he accepted Mulki’s resignation, the king met with the local press and said that he has always stood by his people and will always do so. In a prepared statement, he cited regional conflicts as a contributor to Jordan's challenges but added, “We have to admit that there has been failure and slackness on the part of some officials regarding decision-making.” He said that he had worked hard for a parliamentary government, but that poor performance by political parties had impeded its success.

Despite Mulki’s resignation, the nightly protests continued on June 4 with protesters now demanding the dissolution of parliament. There were scuffles with the police near the Prime Ministry but no arrests were reported. The council of professional associations was set to meet on June 4 to decide if the general strike planned for the next day would still go on.

The crisis has underlined the need to carry out a review of political and economic policies as Jordan calls for a new election law that would allow for the formation of parliamentary governments. Jordanians now want full transparency that would expose public corruption and mismanagement, which many blame for the piling up of foreign debt.

The latest crisis has offered a glimpse of a fast-changing political landscape in Jordan. As political parties have become marginalized as a result of policies by successive governments, professional associations and workers unions have emerged as the only viable vehicles for political mobilization. That the vast majority of protesters are young and unaffiliated politically heralds the arrival of a new player on the scene, one that has been marginalized for years.

Finally, the crisis has reset the political agenda for the kingdom, with key players such as political parties, professional associations, retired military officers and a former prime minister now calling for the resumption of the political reforms that have faded with the waning of the Arab Spring. The new prime minister will be expected to engage the public in debates that will center on the separation of powers and the rehabilitation of political life in the kingdom.

As young Jordanians become empowered and motivated, thanks to social media and the grim economic outlook, they will be expected to play a leading role in pressuring the system for genuine reforms. One thing is for sure at this stage: Jordan is at a historic milestone and the coming weeks will be crucial in determining the future of the country.