Public unrest is looming with the Jordanian Parliament passing an income tax bill after the previous version sparked nationwide protests over the summer and discussing another law that would restrict freedom of speech. 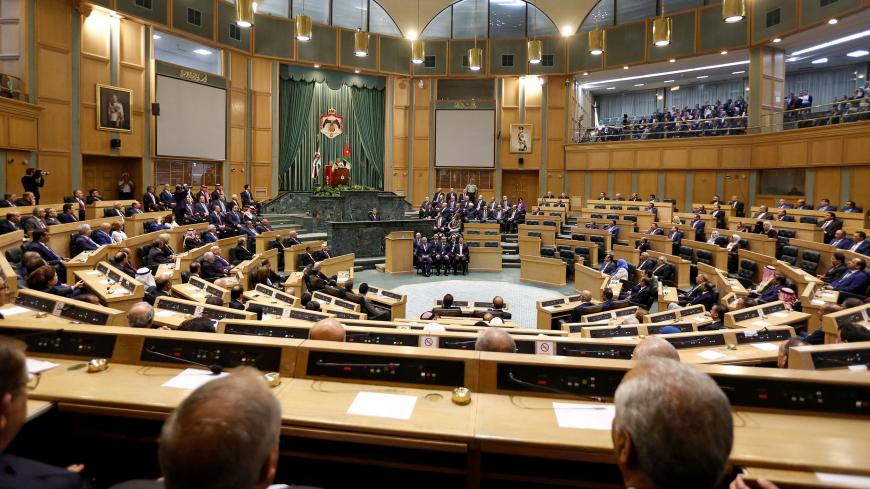 Jordan’s upper house, the Senate, passed an income tax bill on Nov. 26, a day after the House of Representatives rejected amendments it proposed. Instead of holding a joint session of both chambers, the senators opted to approve the draft law as it was passed by the lower house, which had lowered tax rates on a number of commercial and industrial sectors. On Nov. 21, the Senate voted to revert to tax rates originally suggested, stirring negative reactions from some legislators, the media and various business sectors in the kingdom.

The government of Prime Minister Omar Razzaz has crossed a major hurdle by passing new income tax legislation, the issue that brought down its predecessor last June. In contrast to the popular protests that forced the resignation of Hani al-Mulki’s government, the Jordanian street has been eerily quiet this time. But the general mood remains both critical of the proposed law and skeptical of the government’s promises that it will not target the middle and low-income classes.

While the kingdom’s influential Professional Unions Association that led this summer’s strikes and protests remained silent as the House debated the income tax bill earlier this month, the Jordan Times reported Nov. 25 that the syndicates once again opposed the controversial bill, saying that “escalatory yet democratic measures” may be taken to push for its cancelation. On the same day, a small number of union members held a protest in front of the Professional Unions compound.

Passing the law, which is intended to prevent tax evasion and widen the tax base, is part of an economic reform plan that the government is undertaking in an agreement with the International Monetary Fund. The adoption of the law will allow the government to receive additional loans from the IMF and other creditors to deal with its budget deficit as it continues to restructure the economy.

But representatives of various commercial and industrial sectors say provisions in the bill will cripple the local economy further and raise prices of essential goods. President of the Amman Chamber of Industry Fathi al-Jaghbir told Al-Monitor that additional taxes will hurt Jordanian industries and weaken their competitiveness. He pointed to an amendment that canceled an exemption of income tax on exports while another raised the income tax rate on the industrial sector from 15% to 20%.

Jaghbir said that other sectors, such as agriculture, will also be adversely affected. He added that the chamber will take a number of escalatory steps against the law including holding peaceful protests and launching a social media campaign.

Economic columnist for Ad-Dustour Khaled al-Zubaidi also believes the new law will hurt the local economy and chase off foreign investors. He told Al-Monitor that an amendment proposed by the Senate to impose a 10% tax on capital gains and another 10% on profits earned from trading in securities will kill an already weak financial market.

“The government is working against its own interest because as economic sectors become sluggish as a result of this law, its earnings from taxes will decrease accordingly,” Zubaidi said. He added that when annual economic growth is at a humble 2%, the government should introduce incentives such as lowering taxes.

But while the government has avoided mass protests over the income tax law, it may still face public wrath over another piece of controversial legislation it wants to pass. Last summer, the previous government had sent an amended cybercrime law to the House. The proposed draft was criticized by the Jordan Press Association, journalists, activists and political parties for imposing heavy penalties including jail on those found guilty of incitement under a vague hate speech article.

The controversial article loosely defines hate speech as a “statement or act that is prone to fuel religious, sectarian, ethnic or regional sedition; calls for violence or justifies it; or spreads rumors against people with the aim of causing them physical harm or damage to their assets or reputation.”

But even as Razzaz himself concurred that the definition is too broad, he has refused to withdraw the bill, leaving it to the legislature to make needed changes. He was quoted on Nov. 20 as saying that Jordan needs such a law to fight blackmail, fraud, character assassination and hate speech as well as pornography.

Activists fear that legislators, who are constantly criticized for their poor performance on social media outlets, will cooperate with the government to pass the draconian law. A growing number of Jordanians have joined a social media campaign against the cybercrime bill.

An opponent of the law, House of Representatives member Khaled Ramadan, told Al-Monitor that the government is now attempting to restrict criticism and people’s right to free speech. “I believe the law will pass and that deputies will seek to impose harsher penalties,” he said. He added that current laws are more than enough to deal with hate speech.

Head of Jordan’s Center for Defending Freedom of Journalists Nidal Mansour believes that if the cybercrime law is passed, Jordan’s ranking in various international freedom indices will decline significantly.

He told Al-Monitor that Article 11 of the bill allows for the imprisonment of journalists and social media activists and that the loose definition of hate speech will make any kind of criticism in any medium culpable, facing up to three years in prison. “It’s not an issue of more laws but one of culture and changing people’s behavior,” Mansour said. “It has to do with instilling free speech values and social responsibilities in schools so that future generations can exercise their right responsibly.”