Jordan has taken some measures to contain the economic repercussions of the coronavirus, but some analysts believe they are not enough to avoid total collapse. 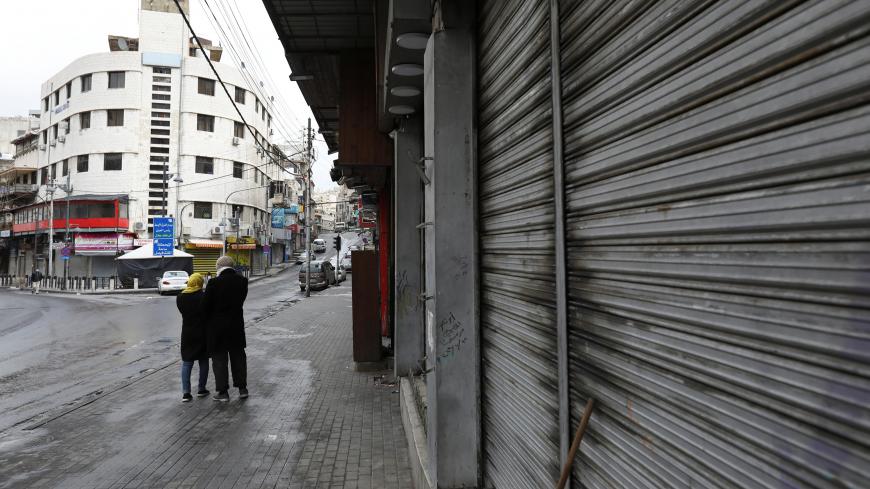 People walk next to closed shops as the country takes measures to fight the spread of coronavirus (COVID-19), Amman, Jordan, March 18, 2020. - REUTERS/Muhammad Hamed

The Jordanian government has imposed an open-ended nationwide curfew March 20, two days after it called on citizens to stay home and avoid leaving unless necessary. Prime Minister Omar Razzaz, in his capacity as defense minister and under an emergency law, ordered the curfew as the number of those infected with coronavirus increased — reaching 112 cases March 23 — and as citizens ignored the call for self-isolation.

At 7 a.m. on March 20, sirens were heard all over the country, announcing the beginning of the curfew, which affected roughly 10 million people. Hours before, army, police and civil defense personnel were deployed throughout the kingdom to enforce the curfew. Those violating it — and more than 400 people did on day one — face immediate jail time, without trial, of no more than a year, and a fine.

Jordan was among the first countries in the region to adopt an immediate response plan to contain the spread of the virus. In addition to sealing off its borders and suspending all flights, giving all public sector employees two weeks of leave and suspending schools and universities, the central bank took a number of steps, including dropping the main policy rate by 100 basis points to 2.5% and reducing the cash reserve requirement that banks must maintain to release an additional liquidity of around 550 million Jordanian dinars ($775 million). The central bank also called on banks to reschedule loans and offer appropriate grace periods with no additional charge to their clients.

Once Razzaz announced the activation of the Defense Law March 17, he issued Defense Order No. 1, suspending some articles of the 2014 Social Security Law. Under that order, the Social Security Corporation reduced the social security subscription ratio for institutions and employees from 21.75% to 5.25%. The move aims to alleviate the financial burden on both employer and employees.

On March 22, al-Ghad daily reported that the government will announce an aid package of 16 million Jordanian dinars ($22 million) to poor families, the elderly and ill in the form of food and medicine. The government is also studying options to help farmers and other sectors.

Since no one can predict how long the lockdown will last, it is difficult to speculate on how much the economy will suffer. In January, the International Monetary Fund (IMF) predicted that the kingdom’s gross domestic product will grow by 2.2% in 2020. Following the lockdown and amid the global coronavirus outbreak, that figure is no longer realistic.

Minister of Finance Mohamad al-Ississ dodged a question from a local TV station March 18 about the coronavirus effect on the local economy, saying he is now focused on the well-being of those infected.

Economic analyst and columnist Salameh al-Darawi told Al-Monitor that the repercussions of the coronavirus outbreak are the most serious threat to Jordan’s economy since the establishment of the kingdom.

“Every sector will be affected and the longer the crisis goes on the deeper the damage,” he said. “Just imagine this: The treasury needs 580 million Jordanian dinars ($818 million) every month to pay civil servants, military and civil retirees. More will be needed for private sector employees. Where will the money come from if all sectors are shut down?”

The tourism sector, which contributes about 19% of Jordan's GDP, is feeling the immediate effects of the lockdown. Business analyst Jawad Abbasi told Al-Monitor that tourism expenditures rose by 10% last year to reach 4 billion Jordanian dinars ($5.6 billion), mostly in foreign currency.

“With the coronavirus outbreak," he said, "it is certain now that the tourism sector has lost the spring and most of the summer seasons, if not the rest of the year.” He added that this means the loss of over $3 billion in foreign currency, but even worse is the fate of over 54,000 people working in the tourism sector.

On a more hopeful note, Abbasi said that the big drop in oil prices means that Jordan’s energy bill will also go down by about 50%, or $1.6 billion, in 2020. He added that a cheaper dollar — the Jordanian dinar is pegged to the dollar; 0.709 Jordanian dinar is $1 — will also boost Jordan’s exports, especially to European and Japanese markets.

Former Minister of Economic Affairs Yusuf Mansour believes those most affected will be workers and service providers in the informal economy, such as farmers, barbers, fast food workers and taxi drivers, who make up between 30-40% of the workforce. “The majority have no social security or benefits and live from day to day,” Mansour said.

In his view, recovery will be slow and painful because, unlike rich countries, “Jordan suffers from fiscal inflexibility, meaning it cannot launch a multibillion-dollar stimulus plan because it does not have the resources. It has to borrow to save the economy.”

He called on foreign governments and the IMF to take up measures like longer grace periods, debt postponement and even debt forgiveness. “This is a pandemic, and rich countries have to help poorer ones so that we can all survive this global and unprecedented challenge,” Mansour said.