The Jordanian economy has been dealt a heavy blow by the measures imposed to contain the spread of the coronavirus and now that the lockdown has been lifted, the government is looking into ways to get business going again and mitigate the damage. 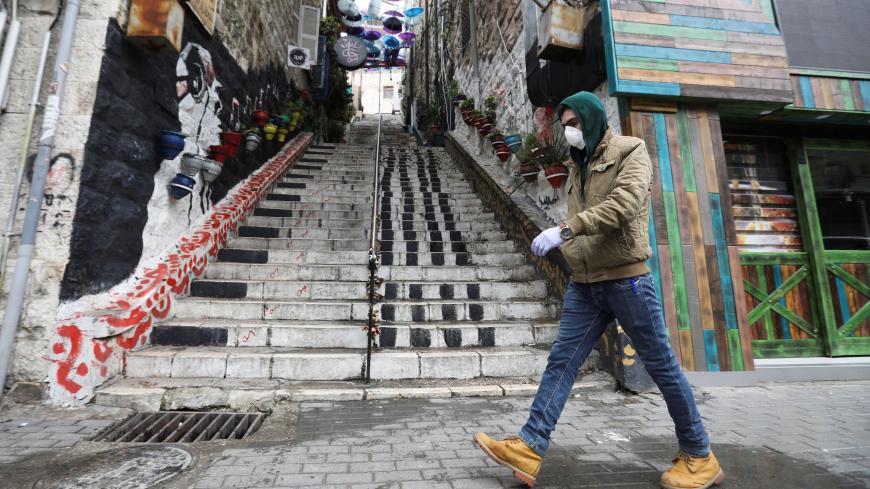 A man wearing a protective face mask walks next to closed shops as the country takes measures to fight the spread of COVID-19 in Amman, Jordan, March 18, 2020. - REUTERS/Muhammad Hamed

As Jordan began to relax its coronavirus measures April 27 by lifting the total lockdown, opening up most businesses and allowing citizens to use their private vehicles during the day, the government's focus has shifted to reviving an economy that underwent more than 40 days of shutdown. So successful have been the government's health measures that the kingdom registered zero new cases in the first four days of May. By May 4, its total cases stood at 471 with only nine deaths.

On May 3, Minister of Industry, Trade and Supply Tareq Hammouri announced that all economic sectors in the kingdom will open as of May 6 and “will be permitted to work at full production capacity provided that the percentage of Jordanian employment in the establishment does not fall below 75%.” Having imposed the toughest lockdown in the region, Jordan is among the first Arab countries to ease restrictions in an attempt to reignite the economy.

But initial indications are troubling. On May 3, Minister of Finance Mohamad al-Ississ revealed, for the first time since the crisis began, the expected impact of COVID-19 on the local economy. At a press briefing at the National Center for Security and Crisis Management, he described the blow to government revenues and gross domestic product (GDP) as “profound.” He added that local revenues had decreased by the end of April by 602 million Jordanian dinars ($849 million) compared with the same period in 2019.

“After the health-related victory, now is the time to act to balance the economic impact, as we have now entered into an economic war against the virus while we are still fighting the virus itself,” Ississ was quoted as saying by the Jordan Times. He expected a 3.4% GDP retraction for 2020.

“We must maintain financial stability in the kingdom and we must try as much as possible to create an environment to help citizens maintain the financial resilience of their families,” the minister added.

The private sector in particular is looking at the government to provide badly needed incentives, according to the president of the Business Society, Hamdi al-Tabaa’.

Tabaa’ told Al-Monitor that in order to avoid stagnation, the government must offer an economic incentive plan that is equal to between 5% and 7% of GDP. “According to a study we conducted, the most urgent government action now is to settle all debts owed to the private sector for projects and services in order to maintain necessary liquidity in the national economy,” he said.

Tabaa’ added that other measures should include a reduction in the sales tax rate on products and services in order to encourage consumer spending.

Banking expert Mifleh Akel agreed that the biggest challenge now facing the economy is liquidity. He told Al-Monitor he expects small and medium businesses to require no less than 1 billion Jordanian dinars ($1.4 billion) in direct support in order to survive. “There will be a need for low-interest loans, tax and credit incentives as well direct government funding,” he said.

“The banking sector in particular has a special role at this stage by taking risks when offering loans and by buying government bonds while the Central Bank must lower interest rates further,” Akel added.

Economic experts here fear the impact of falling oil prices will drive Gulf countries to let go of thousands of Jordanian expatriates. This will affect two key economic parameters; the flow of foreign currency in the form of remittances and the unemployment rate, which at the end of last year stood at about 19%. No new government statistics have been released since March, but economists expect the unemployment figure to jump to unprecedented levels. Those who are most affected are workers in the informal economy such as daily laborers who are paid only when they show up for work. These include construction workers, freelance service providers such as plumbers and electricians and others such as semi-skilled workers.

But loss of Treasury revenue from income and sales taxes while hundreds of businesses are expected to go bankrupt, especially in the tourism service sector, will compound the problem for the economy and will have a grave social impact.

A Jordanian economist and former minister who requested anonymity told Al-Monitor that GDP, estimated at 32 billion Jordanian dinars ($45 billion) in 2019, would fall this year by 5.2 billion Jordanian dinars ($7.3 billion). This is based on the assumption that during the four months of closure (February through May) economic activity would fall by 30% and that for the remainder of the year economic activity would fall by 15% as businesses adjust to the new realities of the coronavirus, he said.

Jordan will have to rely on the International Monetary Fund (IMF) and foreign lenders for help as it tries to mitigate the economic effects of the coronavirus. Business analyst and columnist Salameh al-Dirawi told Al-Monitor that the recent approval of a new four-year, $1.3 billion economic reform package between Jordan and the IMF is significant in light of the health crisis and its impact. “The approval of the package means that the IMF, foreign lenders and donors have a positive view of the kingdom’s short- and medium-term performance in a volatile global and regional period,” Dirawi said.

“The G-20, the World Bank and other international groups will facilitate loans and provisions to countries affected by the pandemic and Jordan will be qualified to apply for such loans,” he added. “Even before the coronavirus, Jordan was dependent on foreign assistance to support its local economy and now we need the support of the international community more than any time before,” he concluded.