Jordan gets high marks for dealing with COVID-19, but economic crisis deepens

Jordanians feel that while the government may have succeeded in thwarting the health crisis related to the coronavirus pandemic, it has failed so far in finding solutions to the deteriorating economy. 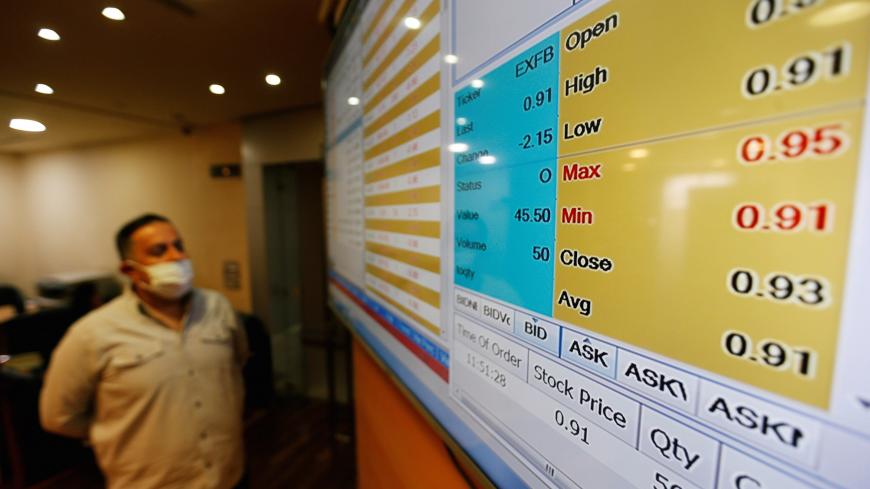 A dealer monitors price movements on an electronic board at the Amman Stock Exchange after it was reopened following a 50-day halt aimed at containing the spread of the coronavirus, Amman, Jordan, May 10, 2020. - REUTERS/Muhammad Hamed

While Jordan was commended for being the first country in the region to impose a strict lockdown to confront and contain the coronavirus pandemic and with spectacular success — just over 800 cases and nine deaths compared to tens of thousands of cases in Israel, Iraq and Saudi Arabia — the government is now being criticized for taking its time to open up the economy and for failing to adopt measures to help ailing sectors.

On June 6, almost 90% of businesses reopened and the curfew was limited to the early morning only. But the celebratory mood was short-lived as Jordanians ponder the huge economic impact of the lockdown and the government’s measures, under a Defense Law that was activated in March to mitigate the losses.

There are two main questions that occupy people’s minds: Have the government’s measures exacerbated the economic blow and limited its role as a facilitator for a quick recovery? And when can Jordanians expect the lifting of the Defense Law under which the government was able to override laws and suspend articles in laws?

One example of how the government used the Defense Law to absolve itself from responsibility toward both employers and employees is a May 31 decision by Prime Minister Omar Razzaz allowing employers to reduce wages of employees who are on duty by 30% for May and June, and by 50% for employees who are not required to work yet. For the latter, the employer does not require the approval of the Ministry of Labor or the employee.

The decision also allows employers in “extremely damaged sectors” to reduce wages of all employees by 60% and without the approval of the Ministry of Labor.

This decision has shocked public opinion and was seen as an abuse of the Defense Law as well as suspending the role of the Ministry of Labor, which is supposed to protect Jordanian workers.

Economic columnist Khaled al-Zubaidi described the prime minister’s decision as “having an extreme impact on hundreds of thousands of Jordanian workers.” Writing in Ad-Dustour daily on June 1, Zubaidi said that the majority of Jordanian workers are already suffering as a result of the lockdown while they still have to pay rent, repay bank loans, and so on. “The government should have sought of ways to inject money into ailing sectors just as other governments have done around the world, as well as offering workers direct aid in these difficult times,” he said.

As a result, Zubaidi predicted that the number of Jordanians who will be unable to repay their bank loans will spike leaving most of them as victims to their employers on the one hand, and to banks on the other.

A recent International Monetary Fund report noted Jordan’s positive steps in dealing with the virus that causes COVID-19, but warned that the "near-term economic outlook has worsened considerably." Jordan’s economic output is forecast to fall, the fiscal deficit and public debt are increasing, and there is a projected $1.5 billion balance of payment gap.

While the government did not launch an economic stimulus program to help ailing sectors, it did initiate a three-month plan to provide monetary aid to thousands of day laborers at a cost of $120 million. Most of the money comes from a special fund that the government had set up to receive donations from public and private companies. The head of that fund, former Prime Minister Abdel Karim Kabariti, told the local media May 30 that he was disappointed that donations had stopped at 93.5 million Jordanian dinars ($132 million) only. He noted that the government will decide how the money will be disbursed.

Calls by the private sector for the government to lower the sales tax on goods and services in order to stimulate public consumption have not been heeded. And in a surprise move on June 8, Razzaz canceled a council of ministers’ decision taken only four days before to delete fines and offer deductions on fees related to land, building and professions licenses for this year and previous years. State Minister for Media Affairs Amjad Adaileh said June 8,  “The decision was made so that the government can review it and expand tax exemptions and deductions to benefit more citizens and commercial entities.”

In a meeting with local journalists on June 8, King Abdullah stressed the importance of a quick economic recovery from the impact of the coronavirus disease to protect Jordanians, according to a Royal Court statement. He said that “Jordan’s economy is poised to recover quickly,” referring to “plans to develop agricultural, pharmaceutical and medical supply industries, while also focusing on domestic tourism and appealing to international visitors by promoting trail, medical and film tourism within preventive measures that reflect Jordan’s capabilities to attract and protect tourists.”

But Jordanian economic experts believe that the government has been slow to take the initiative and offer a path to economic recovery. In addition to major losses to vital sectors such as travel and tourism, which constitute about 10% of the gross domestic product, the country will face a spike in the unemployment rate, which was already high before the pandemic at 19%, as well as mounting public debt, now standing at more than 30 billion Jordanian dinars ($42 billion).

Economic analyst and columnist Salameh al-Dirawi wrote in Al-Ghad daily June 10 that Jordanians have the right to be worried because the government borrowed more than 1.4 billion Jordanian ($2 billion) from local banks in the last three months while borrowing more than 400 million Jordanian dinars ($564 million) from the Social Security Corporation. “The main feature of the government is lack of openness when it comes to the economy,” he said. “The government has said that it is committed to paying salaries of the public sector for two years when in fact it had to borrow money locally to pay for current expenses. It should have been transparent from the start.”

Dirawi continued that instead of injecting money into the economy the government has suspended all bonuses and allowances for the public sector until the end of the year and canceled this year’s bread subsidy — saving the Treasury more than 304 million Jordanian dinars ($429 million). “This silent government should be open with the public about the state of the economy as a result of the lockdown and should tell citizens that it has no option but to borrow in order to meet its monthly expenses,” he said.

Political commentator Labib Qamhawi told Al-Monitor that the government may have abused its powers under the Defense Law while failing to rescue the economy. “The need to suspend the Defense Law and return the government to its constitutional framework is urgent now that the threat of the coronavirus has receded,” he said. “The priority now must be to ensure economic recovery because there is a feeling that while the government may have succeeded in thwarting the health crisis it has failed so far in finding solutions to our economic quandary; the government cannot use one success in one crisis to counterbalance its failure somewhere else.”

Professor of political science Abdullah Swallha told Al-Monitor that the government is using the Defense Law to extend its life rather than to concentrate on opening the economy as the rest of the world. “The government is using the threat of the coronavirus to manage citizens politically and socially when it should be focusing on how to create jobs and attract investments,” he said. “The government was not doing well before the pandemic and the health crisis has come as a gift to give it a new lease of life.”

Project management consultant Ibrahim al-Ajlouni believes that the government has failed to translate the king’s directives about reviving the economy into an action plan. He told Al-Monitor that we may have missed a precious opportunity to restructure the Jordanian economy and erase any aberrations. “All economic laws needed deep revisions so that we can create a new relationship between the public and private sectors, rearrange our priorities by focusing on productive sectors and reassuring foreign investors,” he said. “But what happened is that the government refused to engage the private sector in its discussions and came up with so-called solutions that will do nothing to revive the economy; I am afraid we have failed to turn the crisis into an opportunity.”