Jordan gearing up to reopen kingdom to tourism

The government is hoping to reopen the country for medical tourism amidst growing fears of a second wave and skepticism about the health protocols that will be adopted. 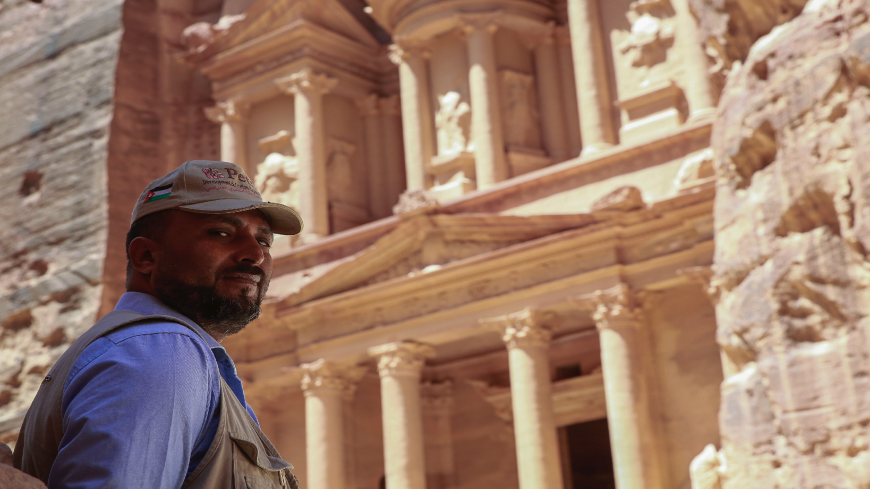 The Jordanian government is gearing up to reopen the kingdom to foreign tourists, starting with the medical tourism sector, amid uncertainty over when the international airport will be open, health protocols regarding arriving tourists and countries whose citizens will be allowed to enter. Prime Minister Omar Razzaz announced July 5 that the kingdom’s airports will reopen by the end of the month for international flights but in a limited way for countries whose coronavirus situations are no more dangerous than that of Jordan.

On July 1, government Spokesperson and Minister of State for Media Affairs Amjad Adaileh told Arabic CNN the kingdom was in touch with the World Travel and Tourism Council (WTTC) to declare Jordan a safe country for travel. The kingdom has seen a sharp decrease in local coronavirus infections in the first two weeks of July, with no more than 1,500 cases recorded since March and only 10 fatalities. On July 5, the government announced it had received the “Safe Travels” stamp from the WTTC in appreciation of the kingdom’s “successful” measures in dealing with the coronavirus pandemic, Tourism Minister Majd Shweikeh was quoted as saying by The Jordan Times.

A day later, the government released a list of countries whose citizens can apply via an online platform to visit the kingdom to receive medical treatment, adding their applications will be processed within 24 hours. The initial list includes citizens of the Gulf Cooperation Council (GCC), Palestine, Iraq, Libya, Algeria, Sudan, Yemen and Cyprus. But local tour operators were critical of the conditions set by the government for travelers to enter the kingdom. They include a coronavirus test certificate 72 hours prior to entering Jordan, to be repeated once the visitor arrives and again on the 7th and 14th days consecutively. In addition, visitors will agree to self-isolate for 14 days, which could be extended. Among other conditions, visitors may be required to wear electronic bracelets while they observe home or hotel quarantine.

These tough measures reflect the government’s weariness of reopening the country at a time when the World Health Organization is warning of a new spike or even a second wave of the pandemic. Israel and the occupied Palestinian territories have seen a new surge in daily infections, while the number of daily cases remains high for most GCC countries and Iraq.

The tourism sector has been particularly hit by the pandemic since Jordan enforced a nationwide lockdown last March. Shweikeh declined a request for an interview, but on June 2 the Central Bank of Jordan (CBJ) announced that tourism revenues decreased by 10.7% to 784 million Jordanian dinars ($1.105 billion) in the first quarter of 2020 after achieving a growth rate of 13.6% during the first two months of the year. In March alone, tourism revenues dropped by 56.5%, according to CBJ data. The CBJ expected the situation of the tourism sector, which contributes no less than 13% to the GDP, to worsen in the following months.

Revenues from the tourism sector increased in 2019 to reach around 4.11 billion Jordanian dinars ($5.7 billion), marking a 10.2% growth compared with 2018, the CBJ said. Jordan received more than 5 million tourists last year.

On June 23, King Abdullah II told heads of divisions at the Royal Department for Environment Protection and Tourism that Jordan is among the countries best equipped to reopen the tourism sector thanks to early precautionary and public health measures taken to deal with the coronavirus, adding that jobs in the tourism sector are vital to the economy, according to The Jordan Times. He also stressed the importance of investing in the tourism sector, noting efforts are underway to attract investors to establish tourist-related projects in Jordan.

In statements to the press on June 12, Shweikeh said that since the onset of the crisis, the ministry has implemented a number of measures to help alleviate the damage to the sector, totaling more than 30 million Jordanian dinars ($42 million). She added, “There’s no doubt the tourism sector was the most affected sector of the economy due to this global crisis. It will also be the last to recover.”

President of the Jordan Chamber of Commerce Nael al-Kabariti praised government efforts but said it should focus on helping those most affected by the closure of the tourism sector through incentives such as lower taxes and licensing fees, while focusing for now on encouraging domestic tourism. He told Al-Monitor the government must listen to the grievances of tour operators.

But head of the Travel and Tourism Agents Society in Jordan Mohammad Samih told Al-Monitor that all government measures to reopen tourism are “empty talk” and “on the ground, nothing real is happening.” Samih said the government had “abandoned this vital sector and left tour operators to take sole responsibility for paying 50% of employees’ salaries for three months while businesses were closed.” He said tour operators were unable to access bank facilities because of government measures.

“The situation will not improve until airports are open and tourists are allowed to return,” Samih said.

He also rebuffed government efforts to reopen medical tourism, saying tour operators will not benefit from it. Medical expert and epidemiologist Montaser Al-Balbisi told Roya TV on July 8 that he disagreed with opening medical tourism “just for a few dollars," adding it is too early to welcome medical tourists as not all hospitals have the resources to deal with quarantine areas.