The Jordanian government approved the 2021 draft budget law, which suggests an even tougher and more unstable year for Jordanians, who are witnessing a growing economic crisis worsened by the coronavirus pandemic. 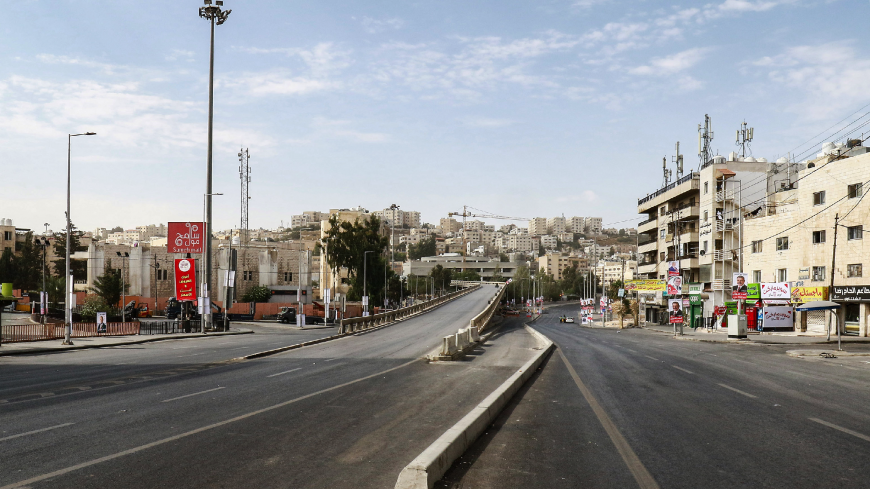 This picture taken on Oct. 9, 2020, shows a view of an empty road during a coronavirus lockdown in Jordan's capital, Amman. - KHALIL MAZRAAWI/afp/AFP via Getty Images

The Jordanian government approved the 2021 draft state budget and the draft law governing the budgets of independent public institutions on Nov. 28, and referred them to the newly elected parliament for debate and approval. King Abdullah II issued a decree Dec. 2 calling on the legislature to meet in an extraordinary session beginning Dec. 10. Lawmakers are expected to dedicate most of their upcoming sessions to discussing the draft state budget, which is expected to pass.

In a press conference held Nov. 30, Minister of Finance Mohamad Al-Ississ said the 7.875 billion Jordanian dinar ($11.1 billion) budget will be primarily financed from an estimated 7.298 billion dinars ($10.29 billion) in public revenue with a deficit of 2.05 billion dinars ($2.89 billion) after foreign aid — expected to be around 566 million dinars ($798 million). Ississ added that projected public expenditure for 2021 will be around 9.39 billion dinars ($13.2 billion), an increase of 6% compared with the 2020 budget.

The minister said that public payrolls (civic and military) and pensions comprise nearly 65% of the state’s 2021 spending, while public debt service will have a 17% provision. Capital spending is forecast at 1.181 billion dinars ($1.66 billion), up by 24.5% from the 2020 budget. Independent government institutions will have a deficit of 587 million dinars ($828 million).

Ississ said the government will not increase current tax rates or introduce new ones, but he said he expected the gross domestic product (GDP) to grow by 2.5% compared to a negative growth of 5% this year. A sum of 165 million dinars ($232.7 million) has been provided to finance health care costs to fight the coronavirus.

Business editor at the daily Addustour Khaled al-Zubaidi said the draft budget law raised more questions than answers and lacked transparency. He told Al-Monitor that the increase in current and capital expenditures by 6% compared to last year cannot be justified. “The devastating effects of the coronavirus on the economy should have urged the government to be more prudent in its expenditure so as to rein in the budget deficit and reduce public debt, which is now projected to jump to 112% of the GDP,” Zubaidi said.

“The increase in capital expenses is a positive thing only if we know where the money is going and how productive these projects will be,” he said. “In past budgets, funds provided for capital expenses were transferred to current expenses provisions, thus failing to create new projects."

Economic analyst Adli Qandah wrote in the daily Al-Ghad Dec. 2 that the new state budget will only add to the kingdom’s economic woes next year. He said the proposed budget offers no solutions to the spike in poverty and unemployment rates, nor does it help those who had to close their businesses as a result of the lockdowns this year. “The government is competing with the private sector for bank loans and social security funds as it relies heavily on domestic borrowing,” he said. “The government is expected to borrow 4.7 billion Jordanian dinars ($6.6 billion) locally in 2021.”

Qandah said the interest on debt will rise to reach 1.5 billion dinars ($2.1 billion) next year, which is one-fifth of the public revenue. New capital investments set in the new budget are modest in size at a time when much more is needed to stimulate a struggling economy, he said. “Public expenditure constitutes 88% of the total budget, and that is a staggering figure that points to a nonproductive economy."

Political commentator Fahd al-Khitan described the new state budget as suffering from the effects of the coronavirus. Writing in Al-Ghad Dec. 2, he said the 2021 budget shows serious symptoms: double the budget deficit from last year, an increase in public debt and a low growth rate. “This year has been catastrophic for the local economy where we saw a decrease in tax and customs revenues, a drop in foreign remittances and negative growth rates,” he said. “It is almost certain that the projected budget deficit will exceed the limits, and with the burden of current expenses, which is mostly salaries and pensions, there is little left for capital expenses at a time when it is badly needed."

He said we should not be optimistic about next year. “We will see a rise in unemployment rates, more layoffs and a spike in the cost of living. What is needed are serious plans to stimulate the economy and bold moves to attract investments,” he concluded.

It is worth noting that the unemployment rate had risen to 23.9% in the third quarter of this year — an increase of 4.8% from the same quarter of last year. Another indicator of a sluggish economy is the decrease in government revenues from taxes on oil products by 25.5% by the end of September compared to the same period of last year.