Although few people have been taking part in protests against price hikes in Jordan, analysts believe the public movement could still make a difference. 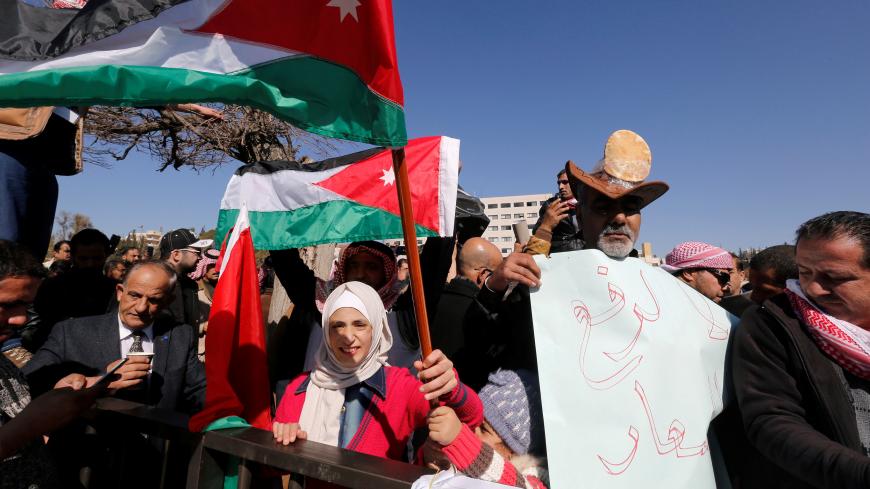 Jordanians are taking to the streets in protest of price hikes involving hundreds of essential goods, including bread, which came into effect at the beginning of February after parliament approved a controversial 2018 state budget. But unlike 2011, when Jordanians held large demonstrations across the kingdom calling for political reforms, this time the protests are few and far between. Every week following Friday prayers, small crowds would gather in downtown Amman, Salt, Kerak, Ma’an and Madaba calling on King Abdullah to sack the government and dissolve parliament. The protests are mostly peaceful, although there were confrontations with police forces in Kerak on Feb. 8 that led to a number of arrests.

But despite bitter attacks on the government’s economic policies by a number of Lower House deputies, Prime Minister Hani al-Mulki survived a no-confidence motion Feb. 18 submitted by the Islamist-led Al-Islah parliamentary bloc. The outcome of the vote is expected to increase public denunciation of both the government and parliament.

The government says the sales tax increase on essential goods and the lifting of bread subsidies are part of its agreement with the International Monetary Fund (IMF) to restructure the economy and reduce expenditures. In an interview with Jordan television on Feb. 13, Mulki said the country would have gone bankrupt had it not been for recent economic measures that saw subsidies lifted on several commodities. But he also blamed populist policies and unwise public spending by previous governments for the decline in economic performance. He said the economy would “exit the bottleneck by mid-2019.”

Mulki’s comments have failed to lift the public mood. On social media, Jordanians were skeptical of Mulki’s promise that their suffering would end by mid-2019. Some pointed to the fact that Jordan had been bowing to the IMF’s orders since the early 1990s. Others blamed the current conditions on the government’s inability to fight corruption and for relying solely on “citizens’ pockets” by levying and collecting taxes.

Trust between the public and the government has reached a new low after the recent price hikes. Adding to the government’s growing unpopularity is the fact that the IMF declared Feb. 15 that it has never recommended lifting bread subsidies or increasing taxes on medicines, adding that economic reforms should not constitute a burden on the poor.

But despite the high disapproval of recent government measures, which included an increase in the electricity tariff and the price of fuel, pundits have been surprised by the low-key public reaction so far. Hassan Barari, a professor of political science at the University of Jordan, told Al-Monitor that successive government policies have put Jordanians under unbearable pressure. “People will take to the street as they are now convinced that it’s not the fault of a single government but the failure of an entire economic policy,” he said.

“The solution is in the hands of the king and it is no longer an issue of blaming the government or replacing it. When it comes to the inability to put food on the table, the concept of social security collapses and this threatens the legitimacy of the regime itself,” Barari added.

While Barari said he could not predict how Jordanians would react in the future, he believes the street is reaching a boiling point. He pointed to a new phenomenon that appeared a few days before price hikes went into effect. Between mid-January and the first week of February, a number of armed bank heists took place in Amman, mostly ending in failure. In addition, there were reports of robberies involving gas stations, pharmacies and post offices. In most cases, the perpetrators were young Jordanians with no prior criminal records.

Barari and other pundits warned of the relationship between worsening economic conditions and the rise in crime and social violence. Al-Ghad newspaper columnist Fahd al-Khitan told Al-Monitor that Jordanians are right to be angry over the difficult economic phase and have the right to protest. “These protests must remain peaceful and we should be wary of attempts to revive radical slogans from the days of the Arab Spring demonstrations,” he said.

“As for the phenomenon of armed robberies, we should look at the reasons behind the rise of such incidents and their effect on social peace,” Khitan added.

One explanation for the worsening economic conditions came from Abdullah, who told university students Feb. 1 that Jordan was paying the price of its political stand over Jerusalem without divulging the identity of those putting pressure on the kingdom. But Barari told Al-Monitor that to say that Jordan is paying for its position on Palestine is not convincing. “The suffering of Jordanians has been going on for a while and it’s about bad economic policies and not political stands,” he said.

While the flow of foreign aid from the Gulf countries has slowed down considerably, the United States remains Jordan’s biggest financial supporter. On Feb. 14, US Secretary of State Rex Tillerson signed an agreement that guarantees Jordan nearly $1.3 billion in annual assistance for the next five years. The agreement saw an increase in annual US aid despite Jordan’s criticism of President Donald Trump’s declaration on Jerusalem in December.

In a country where political parties are weak and parliament is comprised mostly of government loyalists, Jordanians have limited venues to express their anger and distrust of the political system. While public protests have been surprisingly small, observers believe the street remains unpredictable.

Former Deputy Prime Minister Marwan Muasher told Al-Monitor that the return of protests is linked to the confidence crisis between citizens and governments. “There is a lack of political will to fight corruption and people are feeling this. There is no drive to instill political reforms because there are no reformers,” he said.

“In fact, there is an attack on reformers and I am convinced that we cannot create economic reforms without carrying out genuine political reforms first,” Muasher added.