Does latest Gulf aid to Jordan come with strings?

Analysts wonder whether a Gulf aid package to help Jordan deal with its current economic crisis is in fact an attempt to pressure the kingdom into accepting the Israeli-Palestinian peace plan being developed by the United States. 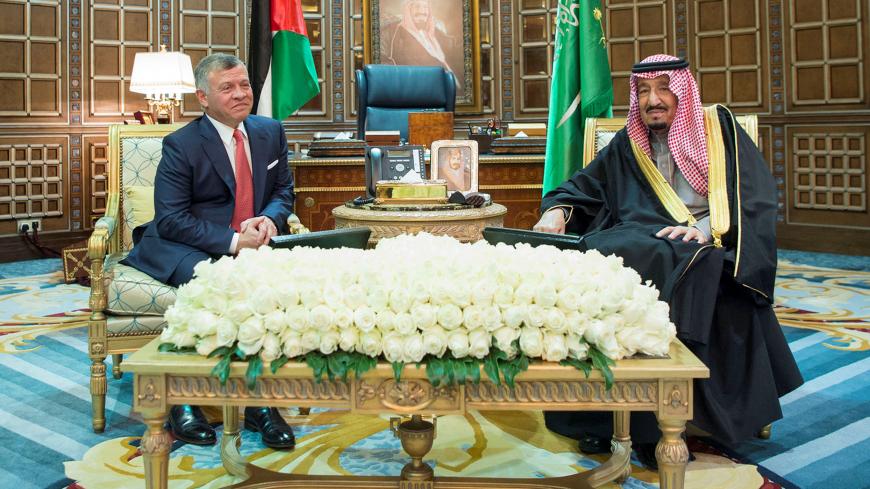 Ambiguity surrounds the financial mechanisms adopted by Saudi Arabia, Kuwait and the United Arab Emirates at a June 11 summit in Mecca to help Jordan navigate through a crippling economic crisis. The kingdom's debt has risen to record highs this year, totaling 96% of the gross domestic product, or $39 billion, while the unemployment rate rose to 18.5%.

The five-year, $2.5 billion package includes a deposit at the Central Bank of Jordan along with guarantees from the World Bank for Jordan to borrow funds and finance development projects. Jordanian authorities have not, however, made public the amount of the deposit, the terms of the guarantees or the share of the package allocated to development projects.

The offer of aid follows on the heels of protests that began May 30 opposing the government’s economic austerity policies and a draft income tax law. The demonstrators called for changes to the government's economic approach and a halt to borrowing from international financial institutions, including the International Monetary Fund (IMF). The protests ended June 6, after Prime Minister Hani al-Mulki's government resigned, and Mulki's designated successor, Omar al-Razzaz, promised to withdraw the income tax legislation.

Given the timing of the Mecca summit, political analysts have been speculating why Saudi Arabia, which chose not to provide aid to Jordan in 2017, has decided to resume financial support to Amman at this particular time.

Bassam Badarin, a political analyst and director of Al-Quds al-Arabi in Amman, told Al-Monitor that the resumption of Gulf aid to Jordan is linked to concerns over possible instability. “Saudi [Arabia has] concerns about Jordan’s peaceful protests spilling over into Gulf countries, as happened with the Tunisian revolution, which later turned into the Arab Spring in 2011,” Badarin said.

In 2012, during the Arab Spring, the Gulf Cooperation Council provided financial support to Jordan that included a $5 billion package over five years to bolster the economy's performance. Additional funding was not forthcoming after the expiration of that package in 2017, a decision that unidentified Jordanian officials say was punishment for Jordan taking positions inconsistent with those of Saudi Arabia on regional matters. The Saudis did not issue an official statement on why it cut the flow of aid to the kingdom.

Amer al-Sabaileh, a strategic analyst and director of the Middle East Media and Policy Studies Institute, told Al-Monitor, “Saudi Arabia is dealing with Jordan differently than it deals with Egypt, which has received a larger amount of aid. This is because of the estrangement between Jordan and Saudi Arabia driven by several issues, namely the Jerusalem issue and the Hashemites' guardianship over the city's holy sites, Jordan's failure to ban the Muslim Brotherhood and Amman's position on the blockade against Qatar, as Jordan only downgraded its diplomatic representation in 2017 [by withdrawing its ambassador in Doha].”

Jerusalem is a top priority for Jordan's ruling Hashemite family, as the kingdom has administered all Muslim and Christian religious sites in Jerusalem’s Old City since the 1950s. Meanwhile, Saudi Arabia’s growing ties with Washington and Riyadh's muted reaction to the US Embassy being moved from Tel Aviv to Jerusalem have led many in Palestine and Jordan to view Riyadh as placing Palestine, and the issue of Jerusalem in particular, on the back burner.

Sabaileh added, “[The aid] comes against the backdrop of Jordanian popular protests in order to help Jordan through its economic crisis, as [the Gulf] considers the kingdom a friendly country and not an enemy. At the same time, it is obvious that Jordan is no ally of the Saudis, given the minimal efforts made in this regard and the underwhelming amount of the aid.”

During a Jan. 31 meeting with students of the Prince Al Hussein Bin Abdullah II School for International Studies, King Abdullah II had said that the financial situation and economic pressure on Jordan persists because of its political positions, especially on Jerusalem, the idea being that a change in Amman's stance could lead to offers to help ease the country's economic problems.

Sabaileh ruled out the possibility of the Gulf aid being linked to Jordan ultimately accepting the so-called deal of the century for Israeli-Palestinian peace supposedly being finalized by Donald Trump's administration. He reasoned, “Jordan is granting Palestinian refugees Jordanian nationality. Pressuring Jordan to either accept or reject [the deal] will not change a thing [in terms of aid].”

The more than 2 million Palestinian refugees in Jordan constitute the highest percentage, 40%, of those registered in the five areas of operation of the United Nations Relief and Works Agency for Palestine Refugees in the Near East, according to the kingdom's Department of Palestinian Affairs. Jordan has reservations about Trump’s forthcoming peace plan based on fears that it might revoke the Palestinians’ right of return or pressure Amman into accepting a confederation with the West Bank excluding Jerusalem — that is, Jordan becoming an alternative country for Palestinians at the kingdom's expense. Such a proposal would be met with great anger by indigenous Jordanians.

Labib Kamhawi, a political affairs expert and writer for the London-based Al-Rai Al-Youm, takes a different position on the resumption of Gulf assistance. “Some Arab countries felt bad about their financial blockade of Jordan in terms of causing instability there, and thus in the region as a whole, which could adversely affect future plans contained in the so-called deal of the century, which requires a high degree of stability in both Palestine and Jordan,” he told Al-Monitor. Kamhawi was referring to Jordan’s traditional backers — including Saudi Arabia, the United States and the UAE — reducing aid allowances to the kingdom in recent years, including US threats to cut aid to countries that voted in favor of the resolution condemning the Jerusalem move at the United Nations.

He said, “Stability is a prerequisite for the success of the so-called deal of the century, since so far it is only a set of ideas going back and forth between parties.”

Zaki Bani Irsheid, deputy general controller of the Muslim Brotherhood in Jordan, also ruled out any link between Gulf aid and Jordan’s acceptance of a peace plan. He told Al-Monitor that the aid was, however, linked to the popular protests in the country. “All solutions, disputes, grants, aid and internal and external borrowing are mere temporary efforts to ease the pressure of the present crises without considering what the future might hold for Jordan,” Irsheid noted.

Khalid al-Zubaidi, a Jordanian writer and economist, told Al-Monitor that he does not believe the Gulf aid package will boost the economy, because it is rather “insignificant.” He called the distribution of aid between deposits and guarantees “vague.”

Zubaidi said, “The amount offered is modest compared to Jordan's $11 billion budget, and the Gulf support was expected to be even greater, so the Mecca summit’s gesture was more one of moral support than financial.”