Turkey to train Syrian rebels, but at what cost?

As talks continue for the use of Turkish bases in airstrikes against the Islamic State, Ankara agrees to train Syrian rebels in a move that increases the risk of Turkey’s Pakistanization. 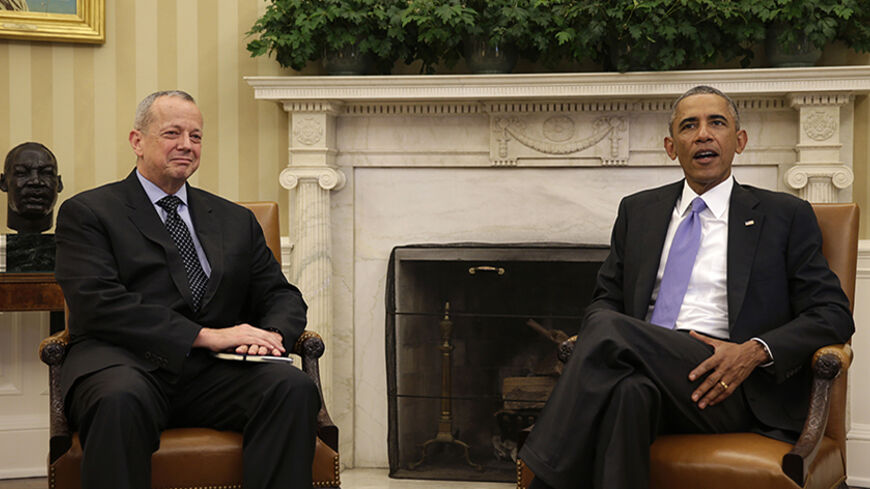 US President Barack Obama (R) meets with retired Marine Corps Gen. John Allen in the Oval Office of the White House in Washington, Sept. 16, 2014. Obama has chosen Allen, who served as the top US commander in Afghanistan, to coordinate international efforts to fight Islamic State militants in Iraq and Syria. - REUTERS/Gary Cameron

Turkey’s role in the coalition against the Islamic State (IS) has begun to take shape following talks in Ankara between Turkish leaders and US President Barack Obama’s special envoy John Allen and Deputy Assistant Secretary of State Brett McGurk. Simultaneous meetings were held in Washington between US officials and Turkish intelligence chief Hakan Fidan. Officials reached an agreement on training “moderate” Syrian rebels, while negotiations continue on the use of Turkish airbases.

Surprisingly, the deal on the “train-and-equip” program was made public by Washington, not Ankara. State Department deputy spokeswoman Marie Harf said Oct. 9, “Turkey has agreed to support train-and-equip efforts for the moderate Syrian opposition.” While confirming the training deal, Ankara sounded circumspect on the possible use of the Incirlik air base.

Citing US officials, The Washington Post reported Oct. 12 that Turkey agreed to open its military bases to the US-led coalition. Obama’s national security adviser, Susan E. Rice, told NBC that Turkish officials “made a commitment” to allow the United States and its coalition partners to use Turkish bases and territory. The Associated Press reported that the commitment included the use of the Incirlik air base, quoting US officials.

Ankara kept mum on the comments of US officials for a whole day. On Oct. 14, just as the Obama administration dispatched a delegation to Ankara for follow-up talks on the bases and training of rebels, officials from Prime Minister Ahmet Davutoglu’s office made the following statement: “There is no new agreement concerning Incirlik. The base is being used under existing agreements. There are certain demands and expectations, and talks are still underway. Agreement has been reached on the training of the opposition, but details on where and how are not yet clear.”

According to Turkish media reports, Allen — a retired Marine general — and McGurk asked that the coalition also be allowed to use the Diyarbakir, Batman or Malatya-Erhac bases, in addition to Incirlik.

Turkmens first in line for training

Details have also leaked on Ankara’s plans regarding the “train-and-equip” effort, with which Ankara is more open to cooperation. Accordingly, the first 2,000-strong group of trainees will be mostly Turkmens from the Damascus and Aleppo areas. The National Intelligence Organization (MIT) will select trainees based on certain criteria, including that the candidates are "reliable" and see Syrian leader Bashar al-Assad as an "essential target." The location of the training, to be provided by Turkish and US experts, is not yet clear, but the central Anatolian city of Kirsehir is said to be a favored option.

To coincide with the technical talks in Ankara, Gen. Martin Dempsey, the chairman of the US Joint Chiefs of Staff, held a meeting with military commanders from about 20 countries on Oct. 13-14 in Washington, with the Incirlik air base on the agenda. Representing Turkey at the meeting was not Dempsey's counterpart, Chief of General Staff Gen. Necdet Ozel, but instead Gen. Erdal Ozturk, the army’s chief of operations.

On the issue of training, the talks have come down to sorting out details, but US officials say that the commitment on Incirlik is still a subject of discussion. In this context, Turkey insists on the establishment of a no-fly zone and security zones as a condition for its cooperation.

In remarks to reporters Oct. 11, Davutoglu reiterated this condition: “We have long been engaged in joint activities vis-a-vis Iraq from Incirlik. But if a country is expected to make contributions as grounds for a comprehensive operation, we’ve already explained our stance. A no-fly zone and safe zones should be set up.”

Asked about Turkey’s most favored option, Davutoglu said, “There are three ways of action. First, the international community could take action together, including ground forces. If this is ruled out, the air force can be employed for bombings, but everybody knows this will hardly be enough. Or, building on the air supremacy to be attained by the air force, a second force should take control on the ground and that would be the moderate opposition. No IS on the ground will mean the regime. And the regime means a growing IS. The solution lies in a third force other than the regime and IS that represents the Syrian people and is comprised of Syrians with no foreign fighters.”

Hence, Turkey’s priority is to topple both Assad and IS, while the United States has limited the war to IS, with no tangible sign of revising its strategy.

Asked whether the Turkey-trained moderate opposition would prioritize IS, Jabhat al-Nusra or Assad, Harf said she had no details to share. Earlier, State Department spokeswoman Jen Psaki had said, “Our position hasn’t changed. Our focus is on [IS],” when asked whether the coalition would target Assad forces.

Regardless of whether its conditions on Incirlik are met or not, Turkey is opening a new, deeper chapter in its involvement in the Syrian crisis, following its efforts to organize and arm the opposition in 2011. By training the Turkmens, Turkey hopes to create a satellite militant entity. Yet, there is a lesson to be learned from the fragmentation of the Syrian opposition in 2013, when some militants who had joined the “jihad” under MIT’s guidance shifted to IS and others to Jabhat al-Nusra: Trained and equipped forces offer no guarantee of their allegiance.

Furthermore, other countries in the “train-and-equip” effort, like Saudi Arabia, have their own agendas. Also, the boss of the program is the United States, which has to pay every militant more than what IS pays. Given that the battlefield is a border region that makes Turkey increasingly vulnerable, the scenario of Turkey’s Pakistanization looms large.

A reminder of the Pakistan-Afghanistan experience would be useful here. The Afghan mujahedeen, whom the Pakistani intelligence organized against the Soviet invasion with Saudi and US support, turned against each other in a power struggle following the Russian army’s withdrawal. Islamabad then mobilized Afghan refugees studying in Pakistani madrasas in what marked the launch of the Taliban movement. The Taliban was supposed to end the chaos in Afghanistan and pave the way for a Pakistani satellite government in Kabul. But once the Taliban seized power, it walked on Pakistan, going down its own path with a hard-line version of Sharia. And the jihadist movement that the state had nurtured in border regions embarked on pursuing its agenda within Pakistan as well. The Taliban’s local elements struck back at their sponsor like a boomerang. The Pakistani Taliban and its sectarian violence became Islamabad’s worst nightmare for many years to come.

In Syria, plans to prop up the moderate opposition have come to naught since 2011, while jihadist Salafism has continued to thrive. As Turkey makes another push in the wrong lane, its own Sunni extremists continue to mature through their interactions with Syrian groups. The trend points to Turkey being in Pakistan’s spot in five or 10 years’ time.

by Murielle KASPRZAK and Joseph SCHMID | AFP | May 26, 2022
END_OF_DOCUMENT_TOKEN_TO_BE_REPLACED