The chairman of the Pakistani Senate's Defense Committee has cautioned that Turkey is repeating in Syria Pakistan's missteps in Afghanistan. 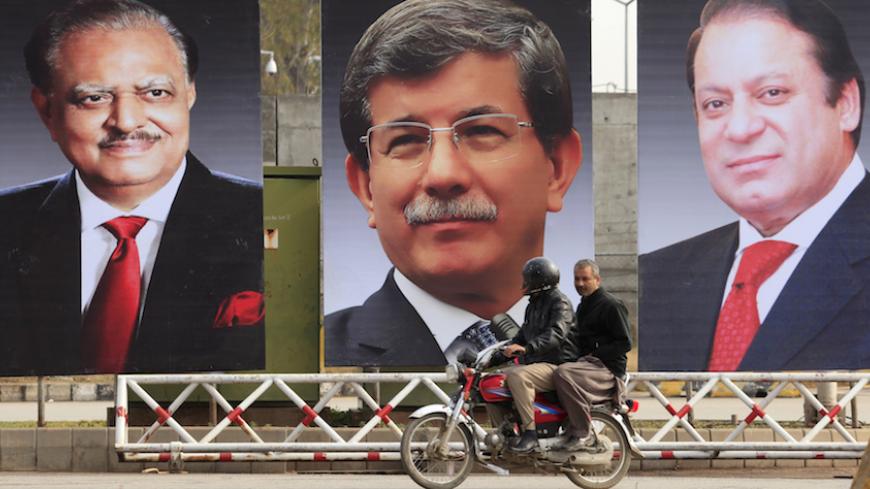 The armed uprising in Syria, with the goal of changing the regime, has given birth to organizations that are threatening the entire population of the region, but Turkey is continuing on its way in total disregard for the perils of "Pakistanization."

As Turkey was discussing the training and equipping of Syrian opposition militants in Turkey, Pakistan recalled its own painful experiences.

In Islamabad, Al-Monitor asked Mushahid Hussein, the chairman of the Pakistani Senate's Defense Committee, about his country’s role in Afghanistan and in creating the Taliban and how he sees Turkey’s involvement in Syria.

Hussein, well known for his academic work on international relations and his rich journalism experience, said he had reminded Turkish Prime Minister Ahmet Davutoglu while he was visiting Islamabad about the “Pakistanization syndrome.” Hussein added, "I warned Davutoglu when he was here, ‘You are repeating in Syria the mistakes we made in Afghanistan. Organizations you support now will turn against you.’ Pakistan was wrong in becoming party to the war in Afghanistan and was wrong in supporting the Taliban. We are now paying the costs of these mistakes."

No one took Pakistan’s warning seriously. Turkey's persisting with the train-and-equip program that will produce nothing but permanent armed groups shows that Turkey still does not intend to learn from the lessons of Pakistan.

Turkish and American officials are involved in intensive final preparations for the training to be given at Kaman, Kirsehir. On March 11, US CENTCOM Cmdr. Gen. Lloyd Austin visited the training base, followed by visits to Ankara by retired Gen. John Allen, the special envoy of US President Barack Obama to the global coalition against the Islamic State (IS), and Brett McGurk, deputy undersecretary of the US State Department. Their meetings in Ankara focused on the train-and-equip program and Turkey’s contribution to the anti-IS operations. Reports say the program that will last three years will train 1,500-2,000 fighters.

Reading between the lines of the raging debate, it's easy to get the sense that the idea behind the anti-IS program is to prevent the Damascus regime from taking over territory to be abandoned by IS. But it must also be considered how the region is to survive with so many armed organizations roaming around. Recalling the experience of Pakistan in such misguided adventures may provide Turkey with a guiding light.

You don’t have to walk the sensationally rough terrain of Khyber Pakhtunkhwa or North Waziristan on the Afghanistan border. A visit to an Islamabad bookshop, where hundreds of books on Pakistan’s impasse are available, may be enough.

There are parallels between the process that drew Pakistan to Afghanistan and the motives that dragged Turkey into the Syrian quagmire: expanding spheres of influence and ambitions to become a regional power. There is not much difference between the ambitions of President Mohammed Zia ul-Haq, who dreamed of expanding Pakistan’s sphere of influence first to Afghanistan and then to Asia, and Turkey’s President Recep Tayyip Erdogan, who wanted to pray in Damascus' Emeviye Mosque and become caliph there.

A short reminder is in order here. In 1979, Pakistan, which, together with the CIA, organized the resistance against the invading Russian army, opened its borders to millions of Afghan refugees. Those refugees provided a ready pool of manpower for the anti-Soviet struggle. Fighters, particularly Pashtuns, were also recruited from religious seminaries in Pakistan.

The CIA and Pakistani intelligence services trained about 80,000 fighters in a $2 billion to $3 billion train-and-equip program. In 1989, after the Soviets withdrew from Afghanistan, it was time to restore order to the country. When Pakistan’s trusted man in Afghanistan, Gulbuddin Hekmatyar, the leader of Hezb-i-Islami, could not consolidate his rule in Kabul, the Taliban was created. Students who were studying at Deobendi fought for two years at Pakistan’s guidance to eliminate other groups and capture Kabul in 1996. According to confidential documents of the US State Department, the Pakistani intelligence services continued with their support of ammunition, fuel and food to the Taliban after the group took over Kabul in 1996. After the 9/11 attacks against the United States, Pakistan had to readjust its relations with the Taliban, which then turned its guns on Pakistan. Taliban leaders who were toppled by the US intervention in 2001 settled down in north Pakistan’s Waziristan region, leading to the emergence of local Taliban groups. About 30 organizations that settled along the "Jihadist Highway" in 2007 came together to establish the Tehrik-i-Taliban Pakistan (TTP) under Baitullah Mehsud and quickly became Pakistan's biggest threat. Pakistanis, with their distinction between "good" and "bad" terrorists, began fighting TTP while continuing to work with the Taliban in Afghanistan.

Afghanistan’s ambassador in Islamabad, Janan Mosazai, told Al-Monitor at the Think Tanks Forum of the Islamic Countries, organized by the Turkish Asian Center for Strategic Studies, that Pakistan was still making the "good terrorist-bad terrorist" distinction, and that whether Turkey was still supporting extremism-inclined groups is also a topic of debate.

What kinds of risks are awaiting Turkey while it supports a military uprising and armed groups in its neighbor? Tahir Ahmad, a researcher with The Centre for Pakistan and Gulf Studies, made a comparison between Pakistan and Turkey, telling Al-Monitor, "There are stark similarities between these two cases. The groups trained are religious bigots, which would backfire as they want their own brand of Sharia-based governance and they reject democracy and any alliance with the Western countries or secular trends. The country is geographically contiguous. Proxy warfare can be fought only by ethnic or independence movements, not in this kind of religious warfare. Second, it will create indigenous support for such kinds of extremist groups, which can demand indigenous reforms and would create a security issue. Third, the humanitarian issue, in terms of refugees and sectarian conflicts that emerge from these conflicts, are more dangerous than the external threat. In Turkey, it can also be intra-religious clashes. Instead of going into a war, Turkey should play a diplomatic role. It is the best time for diplomacy and leadership, not proxy warfare."

In Turkey, our Islamic mindset is open to treating the war in our neighbor as jihad. We are now seeing the beginnings of a tragic Deobendi-esque transition from Sufism to radicalism, and so are not surprised to hear of hundreds of Turkish citizens joining IS and Jabhat al-Nusra.

While Pakistan could not control its border regions and saw them become a jihad highway, now Turkey cannot control its porous border, where opposition forces cross it freely.

All these symptoms point to Turkey’s subscription to a scenario of Pakistanization, making the warnings of Hussein, who wants nothing but friendship with Turkey, extremely important.