Once unthinkable, an emerging consensus is developing between Ankara and Tehran in Syria, as Washington and Moscow try to keep pace; Iraqi Kurdish sources signal that it could be possible to delay a Kurdish independence referendum for a “short time.” 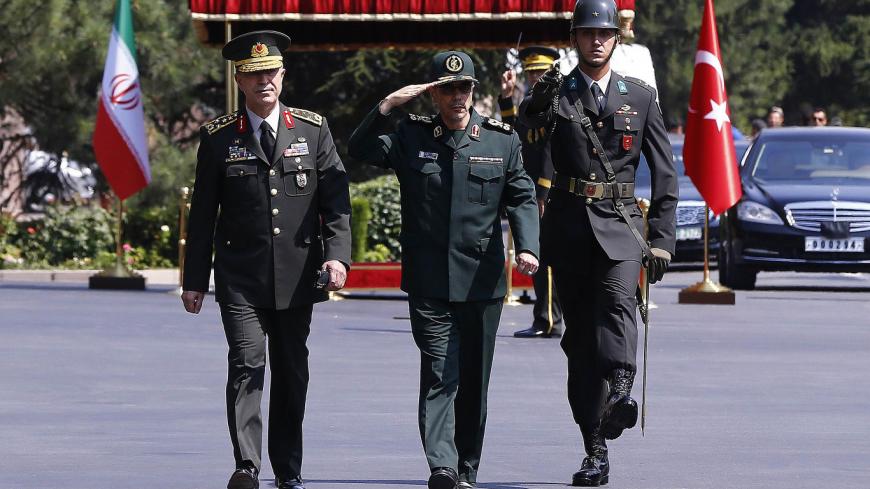 We wrote here last month that US-Russian coordination on Syria could “be a catalyst for a new alignment that brings Turkey closer to Syria and Iran, while testing the limits and extent of Moscow’s influence among the regional players.”

Amberin Zaman, reporting this week on the “unprecedented” visit to Ankara of Maj. Gen. Mohammad Hossein Bagheri, Iran’s chief of general staff, writes that “as the United States and Russia seek ways to end the conflict and — as Iran and Turkey see things — cut deals behind their backs, Tehran and Ankara seem eager to project unity.”

Anton Mardasov adds that Moscow is seeking to maximize its leverage in Syria, including relative to Tehran. “Russia is currently opting for agreements beyond the peace talks in Astana, Kazakhstan — that is, behind Iran’s back,” Mardasov writes. “Examples include the de-escalation zone in southwest Syria that Russia negotiated with the United States in Amman, Jordan, as well as de-escalation zones in eastern Ghouta and northern Homs, both of which were negotiated in Cairo.”

“Since eastern Aleppo was seized, Russia has definitely increased its sway over the region. Russia turned the tide of war and helped the regime survive. However, over the war years, Tehran has gained momentum and built up a multilayer presence in Syria that includes local Shiite militants,” Mardasov explains. “These groups include Syrian units, offshoots of the Lebanese National Ideological Resistance in Syria and Syrian Islamic Resistance groups (sometimes called Iraqi Hezbollah), the units of the Local Defense Forces in Aleppo and the National Defense Forces, comprising Alawites, Sunnis and other Syrians backed by Iranian military advisers and partially or fully funded by Iran. New Iranian cultural centers and Shiite propaganda among the locals are Tehran’s soft-power instruments. This strategy heightens ethnic and sectarian tensions in the region, which helps spread [Islamic State] and [Hayat Tahrir al-Sham] propaganda.”

One potential flashpoint is on the Syrian-Israeli border. “An Israeli-Russian accord allowing the Israeli air force considerable latitude in targeting Hezbollah in Syria emerged as the first counterbalance, which undoubtedly raised Tehran’s ire,” Mardasov notes.

Last month, this column asked whether Israeli Prime Minister Benjamin Netanyahu would enforce Syrian red lines against Iran. And this week, in an almost mirror image of Iran’s concerns about US-Russian planning for Syria, Ben Caspit reports that Netanyahu’s support for a new law allowing him to declare war without government or Cabinet authorization is a response to concerns that Israel may be sold out by Washington and Moscow.

“It is not clear if the Knesset would authorize such a law,” Caspit writes, “but the effect on the region of this publication is crystal clear: An Israeli attack on Iranian or Hezbollah infrastructures in Lebanon or in Syria would mean all-out, open war between the sides. Netanyahu wants to have sole authority to approve such an assault. This is another development in the war of nerves that has been waged in the area for some time. To many international observers, this is reminiscent of Israel’s threat regarding Iranian nuclear activity that led to intensification of the international sanctions imposed on Iran and, ultimately, to the nuclear agreement itself.”

A second flashpoint is, of course, Idlib. Mardasov writes, “The rise of [al-Qaeda-linked Hayat Tahrir al-Sham] in rebel-controlled Idlib province and the use of delaying tactics in the negotiations play into the hands of Damascus and Tehran, which need a protracted military campaign to regain losses. They blame opposition groups for their ostensible loyalty to al-Qaeda. The Syrian government’s offensive to retake Idlib is a negative scenario for Russia and Turkey. Rebel forces will apparently rally to fight the common enemy. New coalitions will emerge among the moderate and radical opposition. Ultimately, the process will strengthen al-Qaeda's position in Syria and trigger a new humanitarian and refugee crisis. Obviously, under such circumstances, the advancing troops will also suffer heavy casualties. That's why Damascus and Iran will try to drag Russia into this new round of war. Should the situation escalate, the Kremlin would tolerate the deployment of Turkish troops.”

A third flashpoint revolves around those areas in northern Syria where Turkey seeks to expand its influence and prevent the expansion of Syrian Kurdish control. Ankara accuses the Syrian Kurdish People’s Protection Units (YPG) of links to the Kurdistan Workers Party (PKK), which both the United States and Turkey consider a terrorist organization. Metin Gurcan reports that “Turkey has been working to rebuild the 772-square-mile (2,000-square-kilometer) Jarablus/al-Rai/al-Bab triangle" with "ambitious and costly reconstruction projects" that "suggest comprehensive society-building." Fehim Tastekin, in assessing Syrian Kurdish options and strategy, cites Turkish President Recep Tayyip Erdogan’s Aug. 2 statement: “We are determined to expand the dagger we stabbed into their project of forming a terror entity in Syria. Very soon we will take new and important steps in this direction.”

Turkey’s preoccupation with beating back Syrian Kurdish control in northern Syria could open the door to some type of accommodation with Damascus. As we reported earlier this year, there may be some lessons learned from Manbij for threading the needle on the roles and interest of Turkey, the YPG, Syria, Russia and the United States. Amberin Zaman explains, “Ankara is keeping up threats to invade Afrin, the mainly Kurdish enclave across its border that is administered by the YPG and its political allies. Afrin is cut off from the rest of the contiguous YPG-run territories that are effectively under US protection, and Turkey is determined that it remains so. A Western diplomat told Al-Monitor on strict condition of anonymity that ‘Turkey would be willing to make peace with Assad in a heartbeat’ if he would help it crush the YPG. Thus Iran, which is bent on keeping Assad in power, scents an opportunity. So does Russia, which has been pressing Turkey to take firmer action against al-Qaeda-linked militants who control Idlib and according to YPG officials has been dangling Afrin as a bargaining chip.”

Despite the emergence of differences between Iranian and Russian interests in Syria, it might be premature or misleading to envision an acrimonious rivalry or divorce. Both Moscow and Tehran back the Syrian government and, as Mardasov notes, “Moscow’s strategy directly depends on the permanent presence of numerous pro-Iranian forces controlling different parts of the front line.”

US sanctions legislation may have also dampened Russian President Vladimir Putin’s expectations for engagement with the Donald Trump administration. As we wrote here last month, a new regional realignment including Turkey and Iran “would test Putin, who welcomes and needs a US partnership to stabilize Syria, but whose leverage with Damascus, Tehran and Ankara could be weakened, rather than strengthened, by closer ties with the United States. … If no sanctions relief is forthcoming [from the United States], Putin will have little interest in carrying Trump’s water at the expense of his regional ties. Russia might therefore undertake an outwardly passive and inwardly supportive role that allows the regional parties to take the initiative against the Syrian Kurds or others. Moscow might see that as the winning hand. For the United States, the Russian card should be played carefully, with full appreciation that Tehran, Ankara and Damascus will all have their say.”

As we have written in recent columns, the proposed Iraqi Kurdish referendum on independence, scheduled for Sept. 25, has revealed the limits of regional and international support for Erbil and has shaken the partnership between the Kurdistan Regional Government (KRG) and Turkey.

The pressure on Iraqi Kurdistan President Massoud Barzani to postpone the referendum has intensified in recent days. Turkish Foreign Minister Mevlut Cavusoglu warned on Aug. 16 that the referendum could lead to “civil war.” The next day, Gen. Joseph Votel, commander of US Central Command, reiterated US opposition to the referendum in a meeting with Barzani in Erbil.

The pressure may be forcing a rethink in Erbil. After meetings in Baghdad on Aug. 17 between a KRG delegation and Iraqi government officials, Iraqi Kurdish sources have signaled that Barzani might consider postponing the referendum for a “short time,” until after the Iraqi elections in April 2018, if a new referendum date is guaranteed “in writing” and under UN supervision.