Iran and Turkey's top military leaders are beginning three days of meetings today in Ankara, and coverage so far suggests the two rivals are feeling marginalized and eager to work together to promote their shared interests. 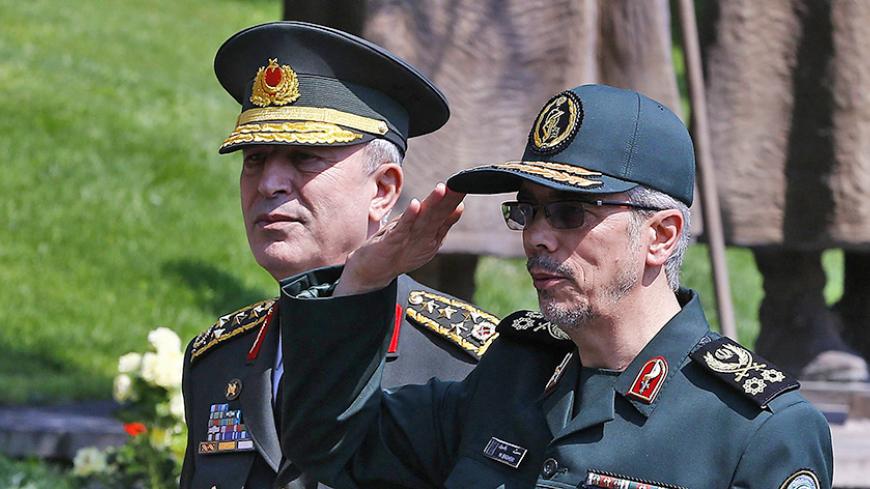 Iran’s chief of general staff arrived in Ankara today for a three-day visit heralded by Iran's state news agency as “unprecedented” and by Turkey's Daily Sabah as a "milestone" as the two regional rivals seek to reconcile differences over Syria and Iraq and to discuss shared fears of Kurdish separatism.

Gen. Mohammad Hossein Bagheri, "citing border security and the fight against terror," told Iran’s official news agency, “This trip was necessary for better consultation and cooperation on various military and regional issues.” The visit comes ahead of a sixth round of talks between Turkey, Iran and Russia to establish so-called de-escalation zones in Syria. That meeting is planned to be held by the end of August in the Kazakh capital, Astana. It also comes a week before US Secretary of Defense James Mattis is slated to travel to Ankara, part of a regional tour. Officials involved in its planning told Al-Monitor the trip will include stops in Iraq and Qatar.

Without a doubt, Bagheri’s moves will be closely scrutinized by the Trump administration, which has embraced a markedly bellicose tone against Iran. It is already being translated into action in Syria, where US forces have moved against Iranian-backed militias and downed Iranian drones. Russia, whose own relations with Tehran are being tested over the latter’s uncompromising stance in Syria, as noted this week by Al-Monitor’s Anton Mardasov, will be interested in the outcome of the general’s parlays in Turkey as well.

Pro-government news outlets in Turkey have cast his visit in a determinedly upbeat light. The English-language Daily Sabah claimed, “The two sides are more willing than ever to reach deals in Syria and Iraq.” Quoting senior diplomatic sources in Ankara, the newspaper predicted that “firm steps are set to be taken.”

Until recently, such optimism would have been unthinkable. The historic rivals were diametrically opposed in the Syrian conflict, with Iran propping up Syrian President Bashar al-Assad with blood and treasure and Turkey backing Sunni rebels bent on toppling him.

But as the United States and Russia seek ways to end the conflict and — as Iran and Turkey see things — cut deals behind their backs, Tehran and Ankara seem eager to project unity.

Even though Qatar is, alongside Turkey, the biggest sponsor of the anti-Assad rebels, the region’s strongest non-Arab states are siding with Qatar in the tiny Gulf emirate’s unresolved spat with Saudi Arabia and the United Arab Emirates.

Turkey and Iran are home to the region’s largest Kurdish populations. Turkey has at least 14 million Kurds, and Iran at least half that many. Both powers are opposed to the Iraqi Kurds’ referendum on independence from Baghdad that is due to be held on Sept. 25 because they fear the potential effects of Iraqi Kurdish independence on their own restive Kurdish populations. But Turkey is far more spooked by Kurdish gains in northern Syria overseen by the People’s Protection Units (YPG), which is closely linked to the Kurdistan Workers Party (PKK). The latter marked the 33rd anniversary of the launch of its bloody campaign for Kurdish independence, and now for self-rule, in Turkey’s mainly Kurdish southeast region today.

Iran occasionally treats the PKK as a tactical lever against Turkey and the Iraqi Kurds, much in the same way Assad and his father and predecessor have. But in the broader scheme of things, Iran sees the group and other Kurdish-Iranian rebels based in Iraqi Kurdistan as a threat, especially now that the United States is engaging, albeit indirectly, with the PKK via the YPG. (It cannot formally talk with the PKK because the group is on the State Department's list of terror outfits.) What if the Donald Trump administration decides to destabilize and overthrow the Iranian regime by fomenting a separatist uprising in its mainly Kurdish provinces? Turkey has a similarly paranoid view of the US-YPG partnership. Pro-government newspapers brim with conspiracies of how America wants to dismember Turkey by arming the YPG, which remains the US-led coalition's most effective partner against the Islamic State.

Ankara is keeping up threats to invade Afrin, the mainly Kurdish enclave across its border that is administered by the YPG and its political allies. Afrin is cut off from the rest of the contiguous YPG-run territories that are effectively under US protection, and Turkey is determined that it remains so. A Western diplomat told Al-Monitor on strict condition of anonymity that “Turkey would be willing to make peace with Assad in a heartbeat” if he would help it crush the YPG. Thus Iran, which is bent on keeping Assad in power, scents an opportunity. So does Russia, which has been pressing Turkey to take firmer action against al-Qaeda-linked militants who control Idlib and according to YPG officials has been dangling Afrin as a bargaining chip.

Daily Sabah reported that members of Turkey’s national spy agency MIT and the Turkish armed forces met with Iranian and Russian officials in Tehran last month to discuss Afrin. Unnamed sources quoted by the newspaper contended that if Turkey could convince the rebels to withdraw from some areas in southern Syria, then “Iran and Russia may keep silent over the handover of Afrin.”