Regional rivals Turkey and Iran are exchanging visits by top officials, brought together by deeply ingrained fears that Western powers are covertly egging on their respective Kurdish populations to weaken and dismember them. 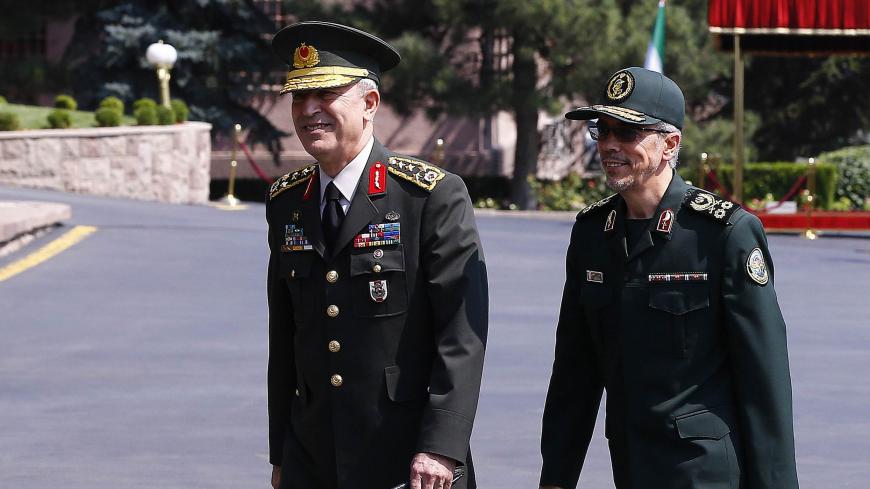 Iran’s Chief of General Staff Mohammad Bagheri wound up a three-day visit to Turkey today, a trip that showcased how the regional rivals can swiftly smooth their differences in the face of common threats.

Fidan, one of the most enigmatic figures in Erdogan’s inner circle, had been labeled pro-Iran until Turkey began sponsoring Sunni Arab rebels seeking to overthrow Syria’s President Bashar al-Assad, who was backed by Iran and Russia. Bowing to Russian pressure, Turkey has since reversed course, turning a blind eye to the fall of rebel-held eastern Aleppo late last year.

Turkey’s biggest concern now is to check the rising influence of the US-backed Syrian Kurdish People’s Protection Units (YPG). Ankara is looking to leverage Iran’s influence over Assad to help it do so. In turn, Iran is counting on Turkey to dissuade its Iraqi Kurdish allies from holding a planned referendum on Kurdish independence next month. In an interview with Iran’s Mehr news agency, Turkish academic Bilgehan Alagoz said, “It is certain that there is no life to an independent Kurdish state in our geography if Turkey and Iran remain resistant.” Turkey and Iran are vocally opposed to the plebiscite, though Turkey's admonishments thus far sound more like rhetoric to appease Erdogan's nationalist base.

Mainly Shiite Iran and mainly Sunni Turkey share deeply ingrained fears that Western powers, namely the United States and Israel, are covertly egging on their respective Kurdish populations to weaken and dismember them. Their paranoia over the Kurds is strong enough to propel the traditional rivals into sporadic bursts of solidarity, in this instance trumping their differences over Iraq and Syria.

Indeed, some leading Iranian officials are said to believe that the Iraqi Kurdistan referendum is a diabolical scheme aimed at provoking military intervention from Iran, thus providing an excuse for the United States to respond in kind. Turkey, for its part, is consumed with suspicions that the United States is arming the YPG not so much to rout the Islamic State as to eventually unleash the group against its NATO ally, Turkey. The YPG is closely affiliated with the Kurdistan Workers Party (PKK), which marked the 33rd year of its armed campaign against the Turkish army on Aug. 15. With the help of US firepower, the YPG has more than tripled the territory under its control, carving out — as Turkey sees it — an independent PKK-led statelet along its borders. Turkey has erected a concrete wall running nearly the full length of its 823-kilometer (511-mile) border with Syria. This month, it began building a similar concrete barrier along its 560-kilometer (348-mile) border with Iran to keep out PKK militants and smugglers who exploit the mountainous terrain separating the two countries to slip in and out. Iranian Foreign Ministry spokesman Bahram Qassemi said Iran welcomed all "actions that will increase security and stability at the border."

Ibrahim Karagul, the editor-in-chief of pro-government Yeni Safak, summed up Ankara’s fevered mindset in his column today: “The Republic of Turkey is faced with the greatest threat of its history. Because for the first time it is openly confronted by a multinational front.” Karagul concluded, “If so, it is necessary to conclude broader, deeper and greater lasting agreements with Iran, Russia and the [government] in Damascus.”

The Daily Sabah reported that Russian Defense Minister Sergei Shoigu would travel to Turkey in the coming days. Shoigu met with Erdogan last month to discuss Syria. The focus will likely again be on Idlib, which fell under the full control of al-Qaeda-linked Hayat Tahrir al-Sham (HTS) militants following last month's ill-fated attempt by Turkish-backed Ahrar al-Sham rebels to roll them back. The United States has also aired worries about HTS and is pressing Turkey to seal Oncupinar, its sole functioning border gate with the province. Erdogan has said only humanitarian relief is allowed through the crossing, which is currently under opposition rebels' control. Shoigu's planned visit paired with US Secretary of Defense James Mattis' scheduled stop in Ankara early next week has spurred speculation that Bagheri's presence is directly linked to efforts to bring Iran on board for a peace deal to be struck between the main stakeholders in the Syrian conflict.

On Aug. 14, Turkey’s Economy Minister Nihat Zeybekci announced plans to use a land route through Iran to ferry goods to Qatar, which remains under blockade from Saudi Arabia and its allies. Turkey and Iran have sided with Qatar in the dispute. In an apparent counter maneuver, Saudi Arabia has been flirting with the YPG. And it may have had a hand in last year’s spate of Kurdish-Iranian rebel activity inside Iran that was spearheaded from mountain bases across the border in Iraqi Kurdistan.

Turkey is Iran’s gateway to Europe, with more than a fifth of its land trade transiting through Turkish territory. The International Crisis Group noted in a recent report, “With Iran’s economy unburdened from nuclear-related sanctions due to the 2015 nuclear accord, both countries appear committed to boosting their nearly $10 billion bilateral trade, while fencing off their geostrategic differences.”

Iran’s Press TV reported Aug. 14 that Turkey’s Unit International energy company had signed a $7 billion agreement with Russia’s state-owned Zarubezhneft and Iran’s Ghadir Investment Company to drill for oil and natural gas in Iran. Around a fifth of Turkey’s natural gas comes from its eastern neighbor. Turkey is also eyeing Iraqi Kurdistan’s vast natural gas reserves, which it hopes to acquire cheaply under the terms of an opaque mega energy deal signed in November 2013 with the Kurdistan Regional Government. Despite its objections to the referendum, the strategic and economic benefits of Turkey’s friendship with the Iraqi Kurds continue to outweigh any cost.