Despite their major differences over key regional crises in past years, shared threats and shared objectives are once again pushing Iran and Turkey together. 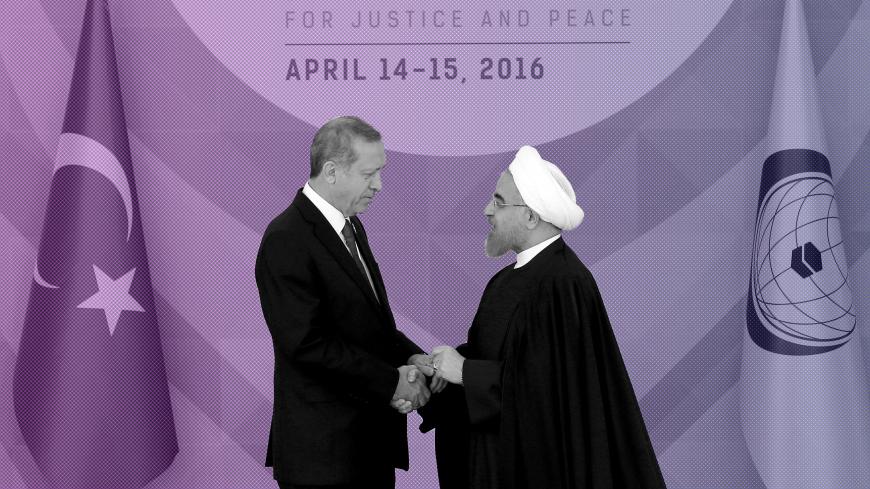 TEHRAN, Iran — Iran and Turkey are among the oldest rivals in the Middle East. This rivalry between the former Ottoman and Persian empires has calmed in recent decades, yet, with the spark of the Arab Spring, the two nations with opposing alliances revived their bitter race for influence and power in the region.

It was clear that the 1823 and 1847 Treaties of Erzurum still have an effect on today’s Turkey and Iran. Therefore, despite all the tension, blood and proxy collision, Ankara and Tehran remained resilient and have always looked for ways to reach compromises. Political relations between the two preserved a level of warmth. Now that the wars in Iraq and Syria, from an Iranian point of view, are coming closer to an end, a common threat in Iraq’s Kurdistan Region is prompting both sides to put aside differences and unify efforts to prevent a domino effect that might harm their national security — namely the Kurdish dream of an independent state.

On Aug. 15, Iran’s Chief of Staff Maj. Gen. Mohammad Bagheri made a rare official visit to Turkey to meet his counterpart, Gen. Hulusi Akar, and senior Turkish officials, including President Recep Tayyip Erdogan. According to Bagheri, the visit was “necessary to exchange views and more cooperation on the military subjects and different regional issues, issues related to the two countries' security, security of borders and fighting against terrorism.”

The Iranian and Turkish sides were keen to reflect the importance of the visit by talking to the media on several occasions, both during the visit and after, giving hints on what the talks were about — the referendum in Iraqi Kurdistan, the situation in Syria’s Idlib province, both countries’ desire to combat terrorism — without missing Erdogan’s Aug. 21 revelation that his country and Iran are discussing a joint military campaign in northern Iraq against the Kurdistan Workers Party (PKK) and the Party for a Free Life in Kurdistan (PJAK).

Erdogan’s words were later denied by Iran’s Islamic Revolutionary Guard Corps. Prior to the denial, Iran’s Foreign Ministry spokesperson Bahram Qassemi told reporters, “The trip was exceptional in that we did not have such visits at such levels for the past 40 years. … The talks were important and decisive. Maj. Gen. Bagheri had a productive meeting with the Turkish president.”

According to a well-informed source in Tehran, the meetings in Turkey were "very important to tackle issues that are eminent and have dire consequences on the national security of both countries. The referendum on [Iraqi] Kurdistan is a matter that concerns Tehran for several reasons. The same applies to Turkey; therefore, all options — literally all options — were on the table of discussions.” The source added, “Both countries are going to take necessary steps to make sure Iraqi Kurdistan doesn't split from Iraq, by any means necessary," and the officials in Erbil received the message.

Both countries are going to take necessary steps to make sure Iraqi Kurdistan doesn't split from Iraq, by any means necessary.

On the matter of the military campaign Erdogan suggested, the source told Al-Monitor, “This was the Turkish president’s initiative. The PKK is a threat to Turkey’s national security as well as to Iran’s, while PJAK, which we are already fighting, is the one posing a threat to Iran's [national security]. He wanted to see both his country and Iran launching the campaign against both groups, and in return, he’s ready to be more helpful in Syria. Idlib could be a step of goodwill; still, Iran doesn’t see the PKK as an enemy.”

To Iran, ending the war in Syria needs Turkish assistance, given Ankara’s good ties with several groups that Tehran describes as “terrorists.” Either Turkey abandons these groups or convinces them to disarm, and then an everlasting political solution will become a reality. The side agreement on Idlib, which Turkey’s Daily Sabah called a joint mechanism, was agreed upon within the framework of the Astana talks meeting in Tehran on Aug. 8 and 9. The Tehran meeting was held away from the media, upon Ankara’s request.

Kurdistan’s planned referendum is a matter of mutual concern to both Iran and Turkey. To Tehran, the referendum — and later the possible independence — introduces three main threats. First, a Kurdish state in Iraq could ignite a Kurdish domino effect in the region, which would enhance the dreams of Syria’s, Turkey’s and maybe Iran’s Kurds. Bitter memories from the days of the 1979 Revolution can’t be forgotten when Iranian Kurdish militants attempted to secede; this was followed by an insurgency that is still active in areas on the country’s northwestern borders.

The second threat is that an independent Kurdish state would mean the division of Iraq and a possible Iraqi Sunni tendency to call for a similar referendum, ending up with at least three small nations in the neighboring country with all the vulnerabilities that might result from such a situation. Iraqi Shiites aren’t fortified against possible internal strife, given the renewed divisions among them with Saudi Arabia’s thriving attempts to attract some factions to its camp. Another issue to worry about if Iraq gets divided is Syria — borders are going to be loose once again, and there’s no guarantee the de facto government will be ready to cooperate with the Iranians and their allies.

The third and final threat from Tehran’s point of view is that an independent Kurdistan, given the Kurdish autonomous region’s good ties with Israel, will give Israel the chance to spy on Iran and interfere and conspire against it; this will pose a great threat to the Islamic Republic, the Islamic revolution and, thus, to Iran’s national security and stability.

Given the above threats, as well as the Turkish reasons to be worried, Turkey and Iran seem to be on the same page and facing almost similar threats, except for Syria. The existential threat the Kurds pose to Ankara and the threat to Iran’s national security in this regard makes it inevitable for both sides to join forces and cooperate, despite differences, to prevent themselves from facing an imminent threat that might have dire consequences.