Turkey, Iran could unite to overcome their Kurdish worries

The emerging Iran-Turkey rapprochement, driven by their mutual desire to contain the Kurds, has led to agreements on military cooperation, but the odds appear to be against a formal military alliance. 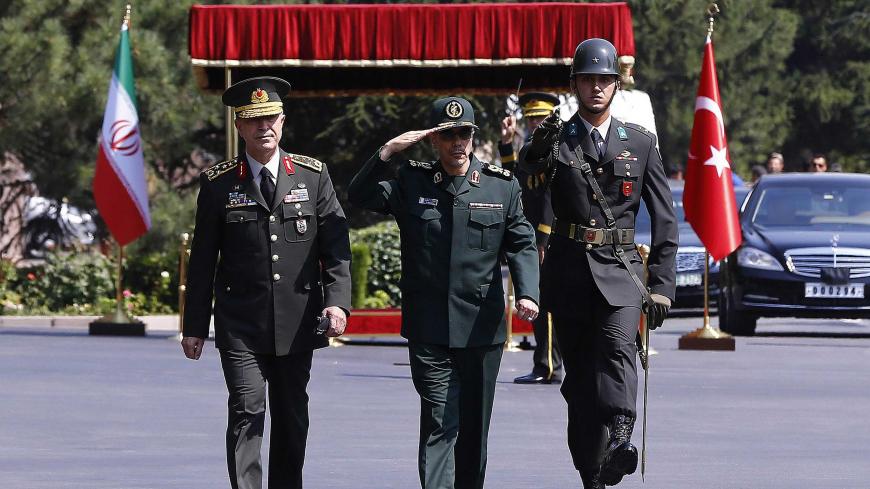 It has not quite been eight months since Turkish President Recep Tayyip Erdogan riled Tehran by referring to Iranian expansionism as “Persian nationalism.” That televised statement earned the Turkish ambassador a summons to the Iranian Foreign Ministry to receive a strongly worded protest. Long-standing regional competition between Ankara and Tehran has, however, begun to show the first signs of a rapprochement during the ongoing crisis between Qatar and a Saudi-led Arab coalition, in which Turkey backs Qatar. In addition, the Sept. 25 independence referendum held by the Kurdistan Regional Government (KRG) in Iraq has resulted in the Ankara-Tehran relationship quickly assuming features of military-security cooperation. The question now is whether their converging military-security interests will be formalized.

As for concrete outcomes of Bagheri’s visit, the two countries decided to augment cooperation in securing borders, coordinating intelligence and conducting counterterrorism operations. The primary objective is to physically severe connections between the Kurdistan Workers Party (PKK), which Turkey considers a terrorist group, and its Iranian affiliate, the Party for a Free Life in Kurdistan (PJAK), and then marginalize them.

Security sources in Ankara told Al-Monitor that the two countries have signed a protocol to carry out joint border security exercises at the platoon and company levels and to conduct joint border patrols targeting cross-border smuggling, from which the PKK and PJAK have been profiting. Iran has reacted favorably to Turkey’s construction of a 90-mile security wall along their 310-mile common border. Military sources said they have discussed how Iran might contribute to border security, perhaps through a joint drone surveillance system or constructing surveillance towers along critical routes on Iran's side of the border.

Of more importance, the countries signed a protocol for intelligence sharing between the Turkish Gendarmerie Command and border security units of the Islamic Revolutionary Guard Corps (IRGC) at the tactical level. Iran and Turkey also agreed to friendly visits of their navy vessels to each other’s ports and signed three separate protocols for exchanging war academy cadets and military medical students to cooperate on education.

The Turkish Foreign Ministry has been wary of warming relations with Tehran. Meanwhile, however, the top military brass, which one might expect to be even more guarded, has surprisingly emerged as an advocate of closer ties. Many observers wonder why the Turkish military, which is partial to secularism, has become the leading engine for improving relations with theocratic Iran. The likely answer could be that “PKK-phobia” has risen to take precedence over the military’s secularist sensibilities.

When Akar arrived in Tehran Oct. 1, he was accompanied by a large delegation of senior officers from military intelligence, training and strategic planning. In a series of intensive meetings, the two sides followed up on issues put on the table during Bagheri’s visit to Ankara. No doubt, however, the focal point was the referendum in Iraqi Kurdistan and combating the PKK.

Ankara is clearly more enthusiastic than Tehran about undertaking military operations against the PKK and the KRG. Since the end of August, Turkey's pro-government media have been churning out reports on potential joint operations against PKK headquarters in the Qandil Mountains of northern Iraq, but Tehran does not appear in any way to be interested in a military operation there. Gen. Hazeh Sayyed al-Shohada, the commander of IRGC ground forces, emphasized in a September statement that Iran will not launch counterterrorism operations outside Iran's borders.

When Erdogan traveled to Tehran Oct. 4, the large delegation accompanying him included the ministers of foreign affairs, defense, energy and industry, in anticipation of signing bilateral cooperation agreements, thus upgrading the strategic relations Akar had worked on in Tehran. They concluded trade agreements and protocols on military training and exercises, border security and naval port visits. Erdogan had described the visit as crucial.

Can such cooperation evolve into an Iran-Turkey military alliance in the future? The main driver of the recent rapprochement is the converging threat perception involving the PKK and PJAK. For now, it is highly unlikely that there will be joint counterterrorism operations against the PKK’s strategic bases at the operational level (corps level or above) or against the KRG. Tactical cooperation on the ground at the platoon and company levels is, however, likely, involving border security exercises, joint border patrol missions and countersmuggling operations to separate the PKK from PJAK and deter the PKK’s mobility in the border zone between Turkey and Iran.

Both countries seem eager to formalize intelligence sharing on border security and surveillance of Kurdish movements by mobilizing permanent outposts with drones and aircrafts and perhaps, in the coming months, by establishing “fusion centers” for intelligence sharing in Tehran and Ankara. It is also possible that institutionalizing military-to-military bilateral relations will result in a trust being built that accelerates diplomatic normalization.

It seems unlikely that the recent developments will evolve into a military alliance. First, constantly changing regional power equations means that both countries must frequently revise their stances, which may not always be compatible. Second, the United States and Russia would never allow Iran and Turkey to form a military alliance based on their anti-Kurdish positions. Third, one cannot ignore that the vast differences between the military and strategic cultures of the two armies hamper true fusion.