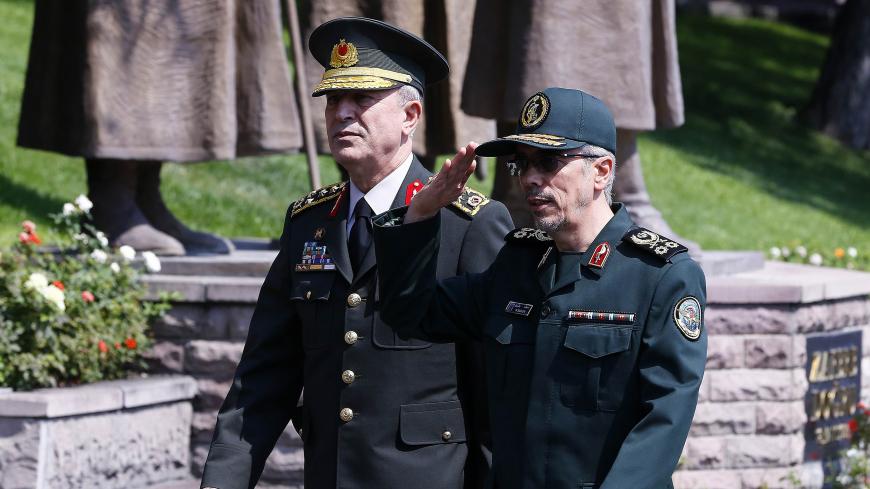 DIYARBAKIR, Turkey — As Iran becomes more vocal about its opposition to the upcoming Kurdish independence referendum in Iraq, there's some speculation about Tehran's true concerns.

Iranian armed forces Chief of Staff Maj. Gen. Mohammad Hossein Bagheri’s recent visit to Turkey found its place in history as the first visit by a senior Iranian general to Turkey in 38 years. Although the subject was not on the official agenda, it wasn’t difficult to guess that the parties discussed the referendum the Kurdistan Regional Government (KRG) has scheduled for Sept. 25.

While Bagheri was in Ankara in mid-August, his army was active on the Iraqi border, with thousands of Islamic Revolutionary Guard Corps members and heavy equipment deploying in six towns in Iran's Kurdish area. This wasn't the first time Iran had taken military measures against Kurdish organizations in the region, but its timing was significant, as Iran was looking for support from Turkey against the referendum.

In addition to amassing forces, Iran is using drones to observe the area. There were some predictions of a joint Iran-Turkey operation against the Kurdistan Workers Party (PKK), but Iran quickly denied those reports.

In areas where Iranian troops are gathered, there are also members of the Party for a Free Life in Kurdistan, the PKK's Iranian extension; other Iranian Kurdish organizations; and KRG security units.

Mehmet Alkis, a Ph.D. student at Marmara University who closely monitors the Middle East and Iraqi Kurdistan, said it was no coincidence that Iran suddenly moved troops to the area. According to Alkis, Iran will use all available means to foil the referendum.

“Iran considers Iraq and Syria strategic [high-value areas] because of their gas and oil resources and for being relevant to Iran’s military and political interests. An independent Iraqi Kurdistan could constitute a major threat to Iran. Iranian media said [two weeks ago] Iraqi government forces were about to attack the Kurdish capital, Erbil, but the Baghdad government swiftly denied the reports," he said.

In April, there were reports that Iran’s renowned Gen. Qasem Soleimani had met with groups close to Iran — groups already opposed to the referendum and to Massoud Barzani's Kurdistan Democratic Party — and asked them not to be swayed and to withhold any support for the referendum, Alkis told Al-Monitor on Sept. 2.

“Something even more interesting is worth noting. A few days ago, the Islamic State [IS] signed a deal with Lebanon's Hezbollah to withdraw [IS] jihadi fighters from Lebanon to the Iraqi border. This is important. We saw how IS lost Raqqa and Tal Afar. Clearly, now [IS wants] to come to the Iraqi border and reinforce its forces at oil-rich Deir ez-Zor. For me, it shows that Iran had conspired to bring IS to the Iraqi border and lay siege on the Kurdistan region, thus sabotaging the referendum,” he added.

(However, the US-led coalition was able to delay the IS convoy, and Syria announced Sept. 5 it had broken IS' three-year siege of Deir ez-Zor.)

Though Iran's tactics are bound to influence the referendum, Alkis thinks there is not much likelihood that Iran will militarily intervene to stop the vote. It could, however, further manipulate the situation.

"I can’t disregard how in 2014, IS became a threat to Erbil. Iran could again cooperate with opposition groups to destabilize the region, but without getting involved directly," Alkis said. "Iran has influence in the Kurdish region, especially in Sulaimaniyah." But in any event, he said, Iranian military moves will not delay the referendum.

Israel is among the countries interested in Iraqi Kurdistan affairs. Iran openly opposes the referendum, but Israel declares its support. Their differences have generated speculation that Iran's military moves are actually against Israel.

Political analyst Siddik Hasan Sukru of Erbil is among those who believe claims of Israeli involvement. Sukru told Al-Monitor the referendum is not the main motivation behind Iran's recent actions.

“True, [the maneuvers] could be linked to the referendum, as Iran fears a renewed offensive by opposition forces. Then there was the visit of [Bagheri] to Turkey, which could have been about a joint operation. But the most important reason [for the military moves] is IS. Most likely there won’t be any IS left in Iraq by December, but that won’t be the end of IS, which is very much present in Syria. IS could then try to cross Iran or Turkey to expand to Central Asia. Iran could be taking measures against that possibility,” he said.

Sukru insists, however, that Iran’s priority is to undermine the influence of Israel and Saudi Arabia in the Kurdish region.

“Iran’s concern is not about the independence of Kurdistan, but about Israel. Israel’s relations with the Kurdistan region are developing by the day. Israel is working hard to build an infrastructure for itself in that region. Saudi Arabia has its own goals for that region. Iran understands well Israeli and Saudi designs. Both those countries aspire to a war between Shiite Hashid Shaabi [Iraq's Popular Mobilization Units, which is backed by Iran] and the Kurds after the IS issue is concluded. This is why Iran is on alert: The steps it is taking are against Israel," Sukru said.

"Iran, in the meantime, is fortifying its standing in the Middle East with the help of Baghdad, Damascus, Hezbollah and some jihadis. New tensions between Iran and Saudi Arabia after IS are inevitable. Kurdistan will become a regional conflict, because what is at stake is not the independence of Kurdistan, but a war between Iran and Israel/Saudi Arabia.”

Sukru, like Alkis, thinks Iran will observe the referendum from a distance, rather than intervening militarily. In the meantime, the KRG is moving its special forces to the Iranian border.

Iran has been in close contact with Kurdish organizations since the emergence of the Kurdistan region in 1990s. Nobody really thought Iran would oppose the referendum, but the picture changes when it involves Israel. Iran is intent on foiling Israeli designs and cannot ignore the cooperation between Israel and Sunni Kurds. So Iran appears determined to thwart an independent Kurdistan state while preventing further Israeli influence in the region.