Will Kurds finally vote for an independent Kurdistan?

Two major Kurdistan parties have agreed to hold a referendum for independence. Are the region and the world ready for an independent Kurdistan? 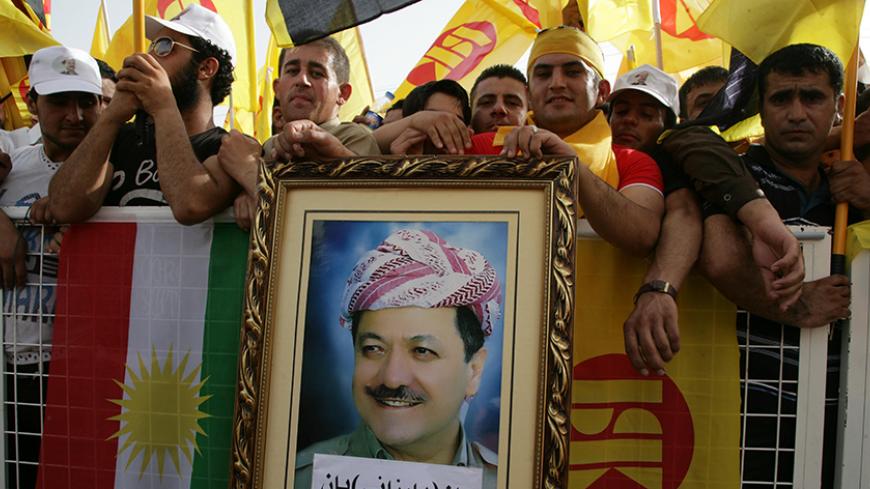 Fans of Massoud Barzani (portrait), the president of the Kurdistan Regional Government in northern Iraq and leader of the Kurdistan Democratic Party, wave the party's flag (R) and the Kurdish flag (L) as he delivers a speech in the northern Iraqi Kurdish city of Erbil, May 26, 2013. - SAFIN HAMED/AFP/Getty Images

DIYARBAKIR, Turkey — When Molla Mustafa Barzani, father of the current president of the Kurdistan Regional Government (KRG), established the Kurdistan Democratic Party (KDP) in 1946, his real objective was autonomy for the Kurds. He relinquished his post to his son Massoud in 1979. Massoud followed in his father’s footsteps and refrained from advocating independence until the 2000s. That is when the status of the Kurdish region was given constitutional recognition and the Kurds began standing on their own feet; it's also when their relations with the central government soured.

The fundamental cause of their deteriorating relations was economic. As tensions mounted, Kurds began to play the "independence" card while repeatedly warning that if nothing else could be done they were ready to declare independence after holding a referendum.

But global and regional developments did not allow for a referendum to be held or for independence to be declared. The bitter, endless arguments were eventually forgotten when the Islamic State (IS) attacked the Kurdish region. Inevitably the major issue then became how to expel IS from the region. Kurds were the only force that could take on IS on the ground, and Kurdish operations indeed forced IS to halt its attacks and retreat. This, in turn, boosted the popularity of the Kurds worldwide. Independence debates resumed parallel to growing confidence in the Kurds.

Suddenly the Kurdish independence issue put on the backburner by the Kurdish administration was again on the agenda. The first move was the decision of the Kirkuk Municipal Council to fly the Kurdish flag.

That was followed by a debate on holding a local referendum to attach Kirkuk to the KRG. As these debates were taking place, the KDP and the Patriotic Union of Kurdistan (PUK) held a meeting to discuss independence. In the meeting chaired by President Barzani, a decision was made to hold a referendum for independence.

At first glance, this meeting resembled all others before it. But this time it was decided to organize a separate council for the referendum. This council will first meet with all ethnic and religious groups in the Kurdish region and then go on tour to persuade Baghdad and neighboring countries. The council has not yet been formally set up, but a smaller delegation made up of KDP and PUK delegates went to Baghdad for consultations.

All these signs indicate that this time around the Kurds are taking the independence issue seriously. But realistically speaking, it is clear that the Kurds are first going to probe reactions of neighboring countries and international powers regarding the referendum.

Academic Mehmet Alkis, who specializes in Iraqi Kurdistan issues, agrees that this time the Kurdish administration is serious. Alkis believes that, although this time the Kurdish hand is strong, it still needs to find the answers to several questions: "What will international powers say? What will be the reactions of regional powers, Turkey, Iran and neighboring countries? How will the political relations between the Kurds shape after the referendum?" Alkis asks.

Alkis notes that from 2013 to today and during the Barack Obama period, the United States was telling the Kurds to coexist with Baghdad. “Washington was saying, let the Baghdad government rule. Don’t disrupt Iraq’s territorial integrity. If you walk out now, Iran’s influence in the region will grow,” Alkis stated.

How Turkey will react seems to be an important question. Alkis says Turkey will remain neutral on the referendum issue. He explained: “Turkey politically doesn’t want Iraq’s territorial integrity to be touched. But Ankara has political and economic ties with the KRG. If there is a referendum, Turkey will remain neutral. An independent Kurdistan won’t have any negative repercussions for Turkey, as the Kurdish oil is exported via Turkey. Moreover, Turkey may want to use the Kurds as a buffer to Iran’s designs. Yes, Ankara reacted angrily to the flag at Kirkuk, but it won’t be the same if there is a referendum.”

Former deputy of the KRG assembly Aso Karim said it is inevitable for changes to take place after wars in the region end. Speaking to Al-Monitor, Karim said Kurds will also be affected by these changes. “The Kurdish experiment on federalism with the central government did not succeed. None of our problems were solved — particularly the Shiites ignored the constitution. As Kurds, we have to seek other means and formulas. Otherwise, our legal and political status will remain stagnant," said Karim.

He said the referendum is not a card to be played in domestic and foreign politics. “We have some problems in Kurdistan. The national assembly is not functioning. We have economic problems in our daily lives. Political parties don’t trust each other. The KRG president wanted support from the UN secretary-general because Kurdistan has lost confidence in Baghdad. Nobody believes that our problems will be solved with Baghdad,” added Karim.

He nevertheless insists the referendum should be held in cooperation with Baghdad. “We are first trying to persuade Baghdad. If we cannot do that, then we will act unilaterally. But what will Tehran and Ankara say then? I am sure most people in Kurdistan will vote for independence.”

He emphasized that a Kurdish state will not pose a threat to Iran and Turkey. Other ethnic communities living in the Kurdish region are not expected to oppose independence, as they are living in the most secure and stable part of the region.

Are the Kurds probing, taking a pulse or really serious about independence? If external reactions remain low key, we may well see the birth of Kurdistan. If not, the debate will continue for years to come.