After 20-year break, these Iranian Kurds are taking up arms again

In a surprise development, the Kurdistan Democratic Party of Iran, which has not used guns against the Iranian regime for 20 years, has resumed fighting, reportedly instigated by regional powers. 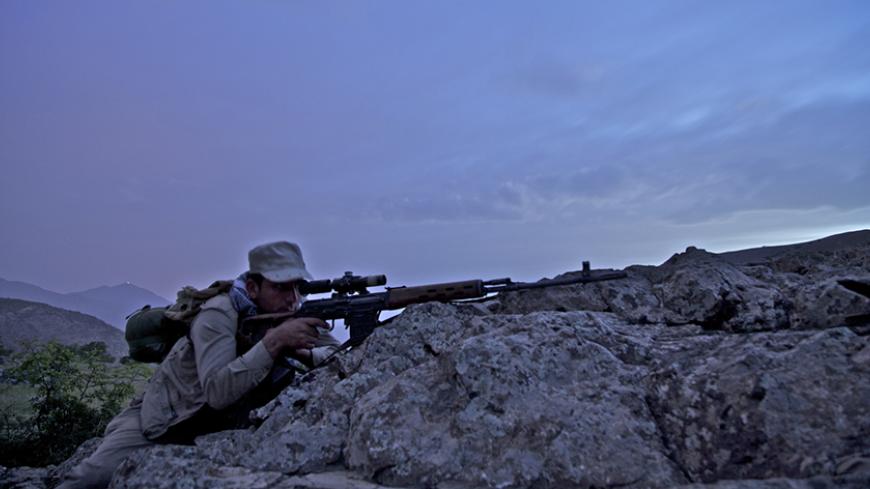 DIYARBAKIR — On June 15, news came out of the Iranian town of Shino, a Kurdish city in western Iran, that an armed group had clashed with the Islamic Revolutionary Guard Corps and that both sides lost six fighters. The armed group was soon identified as peshmerga fighters who belong to the Kurdistan Democratic Party of Iran (KDPI). Reports claimed further clashes in many towns in the area, including Piranshahr.

Iran responded by shelling the KDPI camps along the border.

Why has the KDPI, which has not taken up arms against Iran for roughly 20 years, suddenly become active? The KDPI was engaged in an armed struggle with Tehran from the time it was established in 1945, but ceased the fighting in 1996 so as not to inflict any hardships on the Kurds of Iraq when Northern Iraq came under Kurdish rule. The KDPI that was invited to the region by Iraqi Kurdish leaders Jalal Talabani and Massoud Barzani moved its armed forces to Iraqi Kurdistan.

KDPI members who gave up militancy and who for years lived in the refugee camps in Iraqi Kurdistan with their families could not have imagined that one day they would re-enter into a military confrontation with Iran.

The clashes that erupted in Shino trace back to 2015, when the KDPI decided to return its armed force to Iran. Peshmerga fighters were to establish new camps and politically engage in the towns. The plan was put into motion and the peshmerga fighters began returning to Iran in groups. Clashes with Iranian forces were not long in coming.

What prompted the KDPI's sudden change in course? Most people believe that regional countries or global powers are behind the resurgence of the Kurdish activity. Iranian-Kurdish political activist Hadi Azizi believes the KDPI is engaged in legitimate self-defense against Iran. He told Al-Monitor that he does not believe that external elements were instigating these attacks, saying, “No doubt Iran doesn’t have a major say in Middle East politics. They don’t always have the support of international powers. Iranian Kurds are ready to rise."

How will this conflict affect the autonomous Kurdish Region of Iraq, which just signed new economic deals with Iran? Azizi believes the clashes will not affect the Kurdish government in the region. He said, “South Kurdistan [the Kurdistan Regional Government] is not like it was before. They have relations now with world powers. The peshmerga fought [the Islamic State] and served humanity. They have good support. They can’t forever stand idle to just preserve their interests."

However, political analyst Siddik Hassan Sukru, who lives in Erbil, Iraq, thinks otherwise. Sukru told Al-Monitor that the clashes are conjunctural and signal the beginning of a new era.

He said, “In Iran you don’t see a Kurdish strategy that uses weapons to ensure rights. They don’t seem to have a loud voice within ideology and human rights. Their conservative policies continue as before. I don’t think they can sustain a war. They have good relations with Turkey and Saudi Arabia and also the KDP of Northern Iraq. There is a historical conflict between Saudi Arabia and Iran. Iran wants to be the leader, just like the Saudis. Israel operates in secret in the area. They wanted to redesign the Middle East through [IS] but that didn’t work. [IS] has lost. It hasn’t become a power in the Middle East and the world, but remained a terror outfit. Those who supported them now want to get rid of them. Now they want to consolidate the Kurdish conservatives in Syria, Turkey, Iran and Iraq under the guise of Kurdishness, but it is too late."

He added, “It will not work. Qatar, Saudi Arabia and some European countries supported such a redesign with Turkey as a model. But the project collapsed when Islamist terrorists emerged. Now they only rely on the possibility of an independent Kurdish state. Erdogan, Israel and the Saudis made them promises. They wanted to set up a Salafi Wahhabi state against Iran in Syria and Iraq. Turkey wanted them to fight against the [Kurdistan Workers Party] while Israel and Saudi Arabia wanted the Kurds to fight Iran. It didn’t work.”

As the clashes continue, the KDPI said in an online statement that it will step up its attacks. Sukru does not believe this is feasible. He said, “I don’t think they can conduct major operations, given the military and political realities. They had relations with Iran throughout the 1980s and 1990s. Iran has a major influence on the KDP in Iraq. They are not all that strong among the youth. It is a migrating movement. They fight for two months and then go home. They can launch a guerrilla war. Iran so far has not responded against Iraqi Kurdistan, although the Iranian Kurds have been using that territory [to launch attacks]. Iran has been careful not to damage its ties with the Kurdistan Region of Iraq."

The KDPI announced that it killed seven Iranian soldiers, including a general, in clashes in Sakiz on June 27. The effects of the clashes on the region are so far mere speculation, as regional countries and international powers have not yet commented on the clashes. Although the KDPI says it will continue with its attacks, when winter comes it will have to cease them again for an extended period.