Tension builds in northern Iraq as the conflict between Iranian-Kurdish militants and Tehran seems to escalate. 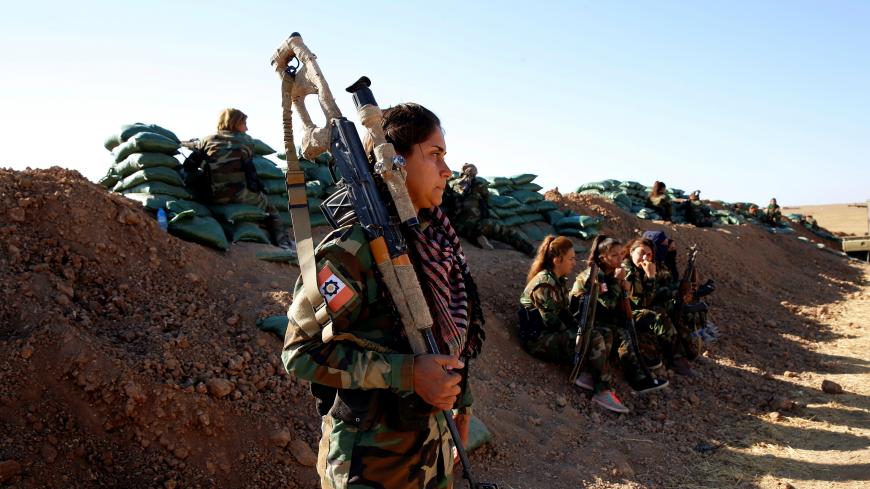 An Iranian-Kurdish female fighter stands behind a sandbag during a battle with Islamic State militants, Bashiqa, Iraq, Nov. 3, 2016. - REUTERS/Ahmed Jadallah

At 4 p.m. March 1 in Binaslawa town just outside Erbil, Salah Rahmani, a veteran peshmerga forces commander with the Kurdistan Democratic Party of Iran (KDPI), got into his car outside his house with his 32-year-old son Sabah. Shortly after the vehicle was started, a blast from a bomb stuck on the vehicle echoed across the town popular with Iranian Kurdish exiles. While Rahmani suffered minor injuries, his son — who worked in a bakery and has a 3-year-old daughter — died from his wounds the following morning. Rahmani, a peshmerga since 1980, is known for his fighting qualities earned from years of battling the Islamic Revolutionary Guard Corps (IRGC).

While Iran has not claimed responsibility for the attack, Kurdish opposition groups that have been targeted in the past concluded quickly that Iranian agents or their hired assassins were behind the bombing. "This is not their first assassination, and it won't be their last one,” Rahmani, bruised and believed to be the target of the car bomb, told NRT on March 2 as he buried his son in Koya town, where the main KDPI base is located.

The targeting of a veteran KDPI peshmerga forces commander on the outskirts of the capital of Iraqi Kurdistan marks a dangerous escalation in the decadeslong enmity between Iranian Kurdish militants and the Islamic Republic. Iran sees the KDPI and other armed Kurdish groups as existential threats and has engaged in everything from assassinations, cross-border raids, detentions and executions to silence the organizations.

The KDPI and a number of other opposition groups fought a bloody battle in the 1980s against Iranian security forces in which thousands of fighters from both sides were killed. In the early 1990s, as the Kurds of Iraq gained autonomy, the KDPI and other groups set up bases in northern Iraq. Iran is said to have launched a campaign of assassination against these groups in Sulaimaniyah and Erbil. Fouad Khaki Beygi, a member of the KDPI media department, told Al-Monitor that 289 members and cadres of various opposition groups, including 153 from the KDPI alone, were assassinated back then. From the mid-1990s until three years ago, the Iranian Kurdish parties — except on a few rare occasions — refrained from taking action against Iranian security forces in consideration of the interests and authority of the Kurdistan Regional Government (KRG). But from early 2015, as the Iraqi Kurds became more confident over their role in fighting the Islamic State, they appear to have allowed the KDPI to deploy hundreds of their peshmerga forces to border areas, where they became involved in clashes with both Iranian border guards and members of the IRGC. The KDPI, for its part, announced a new form of struggle against the Islamic Republic carried out by what the group termed the Urban Peshmerga — which essentially consists of sleeper cells inside Iran. These sleeper cells appear to have been behind clashes and dozens of assassination attempts on alleged IRGC agents in Iranian Kurdish areas in recent years.

Concerned by the upsurge in violent clashes in the Kurdish areas in Iran, IRGC Brig. Gen. Hussein Salami in 2016 threatened to take action against the Iranian Kurdish groups in the Iraqi Kurdistan Region unless the KRG halted them from launching attacks inside Iran. This state of affairs continued until the Iraqi Kurds held their independence referendum in 2017 amid vehement opposition from the international community, including Iran and Turkey.

Following the referendum, Iran — perhaps worried about the implications of the referendum involving the Islamic Republic's own Kurdish minority — moved quickly to aid Iraqi forces in their retaking of the disputed areas, putting the Kurds on the verge of bankruptcy as they lost half their oil revenue.

When KRG Prime Minister Nechirvan Barzani visited Tehran on Jan. 21, the Iranians told him in stark terms that for them to intervene on behalf of Erbil in Baghdad, the KRG had to stop allowing Iranian Kurdish militants to launch cross-border raids. As the KRG gave in to Tehran’s demand, KDPI officials said they would continue their efforts using their cells inside Iran.

On Jan. 3, the KDPI reported that a unit of its Urban Peshmerga killed six IRGC members in clashes near the Iranian town of Piranshahr. On Feb. 27, the KDPI-affiliated media outlet Kurdpa reported the assassination of an IRGC member of Kurdish origin in Iran’s Kurdistan province. The Eagles of Zagros, an underground group reportedly affiliated with the KDPI, claimed responsibility.

Two days later, the car bombing that claimed the life of Rahmani’s son took place. The KDPI is not alone in pointing the finger at Iran; in January, another Kurdish opposition group accused the Iranians of planting bombs in their bases.

On March 7, an offshoot of the KDPI announced that one of its senior commanders, Qader Qaderi, had been found dead with 20 bullets in his body near Rania town in Sulaimaniyah province. Qaderi was a senior commander with over 35 years of experience fighting as a peshmerga. Two years earlier, the KDPI headquarters was a target of twin bombings in Koya in which six people — including five peshmerga fighters — were killed and over a dozen wounded.

The recent wave of strikes appears to be a warning that Iranian agents or their proxies can strike the KDPI and other opposition groups anywhere in the Kurdistan Region. Meanwhile, the Urban Peshmerga of the KDPI inside Iran reiterated their commitment to fight the Islamic Republic on March 2 and “avenge” the blood of Rahmani’s son.

It is difficult to predict how the KDPI and the IRGC will react to the recent developments, but if both parties decide to escalate the violence, it would add yet another piece to the multitude of conflicts that are already raging in the region. “This is a threat to the security of the [Iraqi] Kurdistan Region and a threat to the safety of the members of opposition groups,” Khaki Beygi told Al-Monitor. “The Kurdistan government needs to make its position clear that it will not tolerate such activities.”