Kurdish rebels move to gain US support for operations against Iran

Buoyed by an apparent resurgence in interest in Kurdish rebel groups in Washington, Iranian Kurdish rebel leaders appear to be maneuvering to gain support from the United States as Washington moves to confront the Islamic Republic. 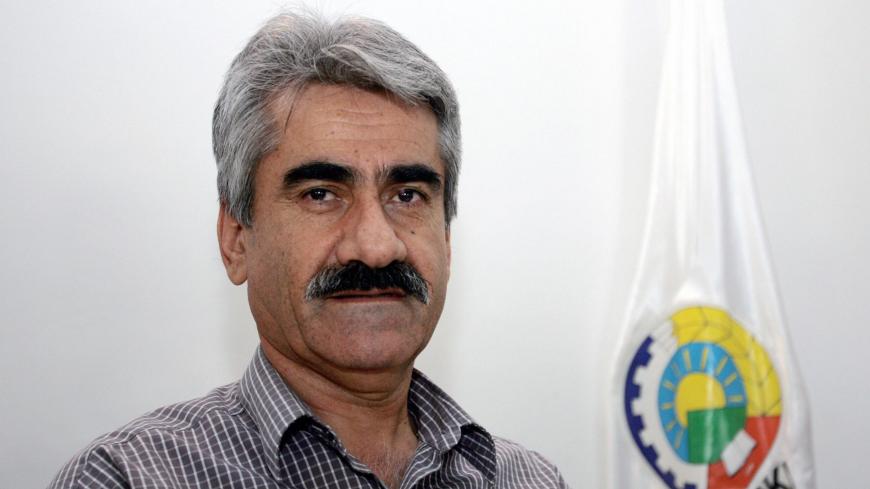 Mustafa Hijri, the leader of the Kurdistan Democratic Party of Iran, poses in his office at Koysancak Camp in Sulaimaniyah, Iraqi Kurdistan, Aug. 13 2005. - MUSTAFA OZER/AFP/Getty Images

Hoping that the United States is serious about directly confronting the Islamic Republic, Iranian Kurdish opposition groups are maneuvering to become an essential part of a new White House policy of weakening and ultimately overthrowing the government in Tehran.

Mustafa Hijri, the head of the Kurdistan Democratic Party of Iran (KDPI), visited Washington June 11-17 to discuss the situation in Iran with State Department officials, congressmen and think tank experts. While it is not uncommon for Iranian opposition figures to meet with US officials and speak at forums in Washington, the sheer number of meetings at various think tanks signals renewed US interest with Kurdish rebel groups that are fighting the Islamic Revolutionary Guard Corps (IRGC) in the mountains of the Kurdish region in western Iran.

Moreover, Al-Monitor has learned that while he has previously met with officials from the Bureau of Democracy, Human Rights and Labor, the KDPI leader this time saw the head of the Iran section at the State Department. In this vein, Fouad Beygizadeh, the KDPI representative in Sulaimaniyah, Iraqi Kurdistan, told Al-Monitor that he is unaware of any secret meetings or further details about the congressmen reported to have met with Hijri.

“Unlike previous meetings in which mostly human rights issues were discussed, the latest meetings were about some important political matters that affect Iran and the role of the KDPI. … The American officials wanted to understand the demands of the Kurdish people,” a statement on the KDPI’s official website said, referring to Hijri’s visit to the US State Department on June 15.

Of further note, the London Center for Policy Research, a foreign policy think tank in New York that is reported to have influenced President Donald Trump's view of the Middle East in general — and the Islamic Republic in particular — on June 13 invited Hijri and another Kurdish rebel leader to discuss the situation in Iran.

"We need to take decisive action, but the question is how? By talking to the Kurdish leaders who are heading the opposition in Iran, we should try to implement change in the leadership of this country," Eli M. Gold, the senior vice president of the London Center, told Kurdistan24 at the June 13 event. The London Center, which holds regular meetings on Kurdish independence, does not call for direct American interventions like that in Afghanistan or Iraq, but instead pushes for a “defense arrangement where nations with similar points of view come together and provide military assets that are necessary for stabilization.” Against this backdrop, Iranian Kurdish opposition groups appear to promote themselves as ideal partners, as they have considerable military assets in the form of armed fighters and human intelligence inside Iran.

"We as Kurds of Iran are the most united opposition force. We are trying to make friends and partners in order to have a critical role in changing the Islamic Republic of Iran’s regime,” Hijri told Kurdistan24.

Abdullah Mohtadi of the Komala Party of Iranian Kurdistan who attended the June 13 event alongside Hijri echoed the same message and stated that “regime change” was discussed in the meetings that he and Hijri held in Washington, including at venues such as the Hudson Institute and the neoconservative Washington Institute for Near East Policy.

Before becoming national security adviser, John Bolton in August 2017 published a white paper in which he publicly urged the Trump administration to pressure Iran by withdrawing from the nuclear deal and fomenting unrest inside the country. The document, titled “Iran Nuclear Deal Exit Strategy,” includes a call for the United States to announce “support for Kurdish national aspirations, including Kurds in Iran, Iraq and Syria,” as well as “provide assistance to Balochis, Khuzestan Arabs, Kurds and others,” underscoring that confronting Iran “should be the administration’s highest diplomatic priority, commanding all necessary time, attention and resources.”

The Iranian Kurdish rebel leaders’ trip to Washington came immediately after a number of clashes near the Iran-Iraq border between KDPI fighters and the IRGC, despite repeated pledges by the Iraqi Kurdish authorities to prevent such attacks. The IRGC said that seven “counter-revolutionaries” were killed and wounded in these clashes, while the KDPI claimed that its fighters killed nine IRGC personnel and wounded 18 others in Siakew near Oshnavieh in Iran’s West Azerbaijan province.

The IRGC fought many of its initial battles against Kurdish militants in the 1980s, and it appears to have since developed a particular phobia of these groups, viewing them as an existential threat. Indeed, almost the entire top brass of the IRGC fought battles against Kurdish militants in the years after the 1979 Islamic Revolution. Iranian Kurdish groups still have thousands of peshmerga fighters based in camps in Iraqi Kurdistan to the displeasure of the ruling parties in Iraq’s Kurdistan Regional Government (KRG).

Tensions are running high since KRG Prime Minister Nechirvan Barzani in January pledged that his government would not allow its territory to be used by Iranian Kurdish opposition groups — including the KDPI — to launch attacks inside Iran. Barzani’s move came as the KRG succumbed to Iranian economic and political pressure following its independence referendum last September.

Given Iran’s long border with Iraqi Kurdistan, officials in Tehran have repeatedly warned that the latter could be used by Israel, Saudi Arabia and the United States to foment unrest in Iran. In this vein, Ali Akbar Velayati, a foreign policy adviser to Iran’s supreme leader, notably said on Feb. 7, “If the Iraqi Kurdistan referendum was successful, today Israeli tanks would be deployed at Kermanshah’s borders.”

Following the recent clashes, an Iranian delegation from the consulate in Erbil officially protested to the KRG on June 11 and reminded the Iraqi Kurds that Iran reserves the right to strike at the “center of the threat,” meaning KDPI bases. But the KDPI — aware of the KRG’s pledges to Iran — has seemingly come up with a new way of carrying out attacks inside Iran without leaving a trail that could be traced back to its camps in Iraqi Kurdistan. "We have told the KRG to provide a shred of evidence that a single peshmerga from us has been deployed from the camps in here," Beygizadeh told Al-Monitor.

The KDPI has over the past two years come back to life after a decadeslong hiatus of its armed attacks inside Iran, introducing a new form of reinvigorated struggle by providing basic military training and arms to its secret members inside Iran to launch small-scale, but regular, attacks. On top of that, the KDPI has deployed a number of peshmerga units along the border with Iran, in the Sidakan area in Erbil province, where guerrillas of the Kurdistan Workers Party are also involved in deadly clashes with Turkish commandos. In fact, as Hijri was traveling to Washington, a group of around two dozen young male and female Kurds who had joined the KDPI in recent months were reported to have completed their initial military training in the mountains and were declared to be ready for battle.

Several Kurdish residents on both sides of the border between Iran and Iraqi Kurdistan told Al-Monitor that the IRGC is constructing large networks of dirt roads to reach inaccessible mountain peaks to fortify positions and move troops more easily. These residents said that while in the past roaming around the border area was relatively easy for locals, it is becoming more dangerous as more outposts are being set up.

Iran has come under increasing pressure internationally since Trump took office in 2017, and especially since the US president withdrew from the nuclear deal last month. With the Islamic Republic increasingly involved in proxy wars against the United States and its regional allies, Iranian Kurdish militants are hoping they will now be brought to the fore as Washington moves to take the battle inside Iran. In this vein, groups such as the KDPI say they’re ready to once again directly confront the Islamic Republic.

“For the last seven years that I have been here, the Iranian Kurdish opposition groups were not in the news; the Syrian and Iraqi Kurds were,” Salah Bayaziddi, the Komala Party representative in Washington who accompanied Mohtadi and Hijri in their recent meetings, told Al-Monitor. “We believe this is a new chapter and want to prepare for it so we can be part of it.”