Why Iranian Kurdish party is stepping up fight against Tehran

The Democratic Party of Iranian Kurdistan broke the two-decade cease-fire by launching attacks on IRGC forces, which triggered Iranian attacks against Iraqi Kurdistan. 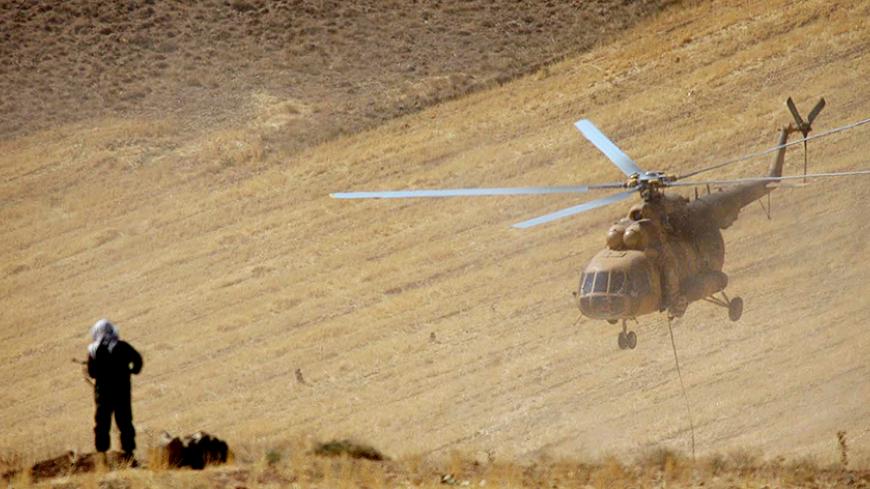 An Islamic Revolutionary Guard Corps sniper stands on a hill as a helicopter flies overhead in military maneuvers in western Iran, Sept. 18, 2004. - REUTERS

ERBIL, Iraq — The leader of a major Iranian Kurdish party has vowed to gradually step up his group's fight against Iranian security forces, as the group ends almost two decades of a unilateral cease-fire with Iran after a series of recent clashes between the two sides.

The Democratic Party of Iranian Kurdistan’s (KDPI) armed wing, known as the peshmerga, have clashed with Iran's Islamic Revolutionary Guard Corps (IRGC) on at least five occasions over recent weeks, resulting in dozens of casualties on both the IRGC and KDPI sides — although both parties dispute the counts.

"Our forces are now moving around [in Iranian Kurdistan], making contacts with people, and are ready to act in self-defense only if attacked. But in future stages, our forces will move to the attack mode. This is a process that will gradually unfold," Mustafa Hijri, the KDPI secretary-general, told Al-Monitor. He said his forces have not yet initiated attacking IRGC units and only engaged in self-defense.

Hijri noted that his party's increased activity and military presence in the Kurdish areas of Iran is justified as the Iranian government "has stepped up pressure on Kurds and has not left space for meaningful civic or political work [inside the country]."

He added that his party's attacks are also meant to "show the world that Iran is not what it claims to be and that it is vulnerable."

The first clashes occurred in Oshnavieh, which, according to Hijri, marked the first major confrontation between Iran and the KDPI since the mid-1990s when the KDPI peshmerga withdrew from the Qandil Mountains on the Iran-Iraq border to a camp in the town of Koya in Iraqi Kurdistan, according to a KDPI statement June 17.

The skirmishes between Kurdish and Iranian forces signify the KDPI's intention to re-establish its military presence inside the Kurdish areas of Iran, which span the western provinces of Kurdistan, Kermanshah, West Azerbaijan and Elam. Since March 2015, the KDPI has dispatched several teams of its fighters and political cadets into Iranian Kurdistan.

The KDPI has a tense history of relations with Iran. Its two former leaders, Abdul Rahman Ghassemlou (killed in 1989) and Sadegh Sharafkandi (killed in 1992), are believed to have been assassinated by Iranian government operatives in Europe.

Several Kurdish activists have been hanged by the Iranian government in recent years for alleged affiliations with Kurdish opposition parties. Iran's constitution bans the followers of Sunni Islam from attaining higher offices such as president. The majority of Iran's ethnic minorities such as the Kurds, Baloch and Turkmens are Sunni, while Kurdish areas are economically among the most underdeveloped in the country, with their governors often chosen from other parts of the country.

Regardless of what objectives the KDPI pursues, its armed struggle might in practice lead to further militarization of the Kurdish areas, stricter restrictions by the government on the population there and further deterioration of economic conditions.

Responding to the rising level of KDPI activity and seeking to increase pressure on Iraqi Kurdish government and factions to curb the KDPI, Iran's artillery shelled the border areas of Sidakan and Haji Omaran inside Iraqi Kurdistan on June 26, injuring at least five people. As a result, 10 local villages have been abandoned by their residents fearing future attacks by Iran.

Seeking to dissuade further KDPI activity, Brig. Gen. Mohammad Pakpour, the commander of IRGC land forces, has threatened to launch attacks on the KDPI bases in Iraqi Kurdistan if the Kurdish government fails to contain Iranian Kurdish forces, according to Fars news agency.

In July 1996, exploiting the civil war among Iraqi Kurdish parties and its close relationship with the Iraqi Patriotic Union of Kurdistan, Iran attacked the KDPI bases in Koya. Hijri said his party takes Iran's threats seriously and is prepared to deal with it.

Following the clashes in Oshnavieh, Mohsen Rezaei, secretary of Iran's Expediency Council and former IRGC commander, accused Saudi Arabia of supporting KDPI activities in Iran. But the Saudi Consulate in Erbil has denied the accusations as "baseless and untrue."

The resurging conflict between the KDPI and Iran has raised questions over how this might affect Iraqi Kurdistan that hosts the Kurdish parties opposed to the neighboring Islamic Republic of Iran.

Realizing the liability that rising KDPI activity inside Iran poses to its interests, the Kurdistan Regional Government (KRG) put out a statement expressing its concerns over the attacks by both Iran and Turkey, which has regularly bombed Kurdistan Workers Party (PKK) positions in Iraqi Kurdistan.

"We object the use of Kurdistan Region's territories and borders by some of the Iranian opposition groups and the [PKK] to launch attacks against the neighboring countries," the KRG statement released June 26 read.

Hijri said that Iranian attacks on Iraqi Kurdish border areas are unjustified, adding that KDPI fighters have not attacked Iranian forces from Iraqi Kurdistan's border areas and have been operating deep inside Iran's territory.

"We are thinking, when the right time comes, to gradually move our forces out of here [Iraqi Kurdistan] so that Iran will not have any excuses to create problems for the [KRG]," Hijri said.

The KDPI is one of a number of Iranian Kurdish opposition parties currently based in Iraqi Kurdistan. But with the exception of the Party of Free Life of Kurdistan (PJAK), which is affiliated with Turkey's PKK, the KDPI and other groups have silenced their guns for the past couple of decades largely out of consideration for Iraqi Kurdistan's relations with neighboring Iran.

As the KDPI has decided to step up its presence in Iran, many have been wondering about the reasons behind the decision and its timing.

"It's largely due to internal Kurdish dynamics. There is a competition between the KDPI and other groups such as the PJAK," Mamand Roja, a Kurdish researcher and analyst, told Al-Monitor. Roja added that the group also seeks to energize its base and draw international attention to its cause by stepping up its fight against Iran.

In recent years, the PJAK has clashed with Iranian forces on a number of occasions, most recently on June 13, trying to establish itself as the Kurdish party challenging Iran's security forces. Now, the KDPI seeks to regain its traditionally dominant position in the Iranian Kurdish scene. But given several strong competitors and internal splits within the party in recent years, it's not clear if the KDPI can retain its former strength.

Kurdish movements across the region have traditionally relied on support from a regional country against the government they have fought. During the Iran-Iraq War in the 1980s, Iran's Kurdish opposition was backed by Saddam Hussein's government and Iraq's Kurdish parties were supported by Iran. The overthrow of Saddam and the domination of Baghdad by groups friendly to Iran in recent years have dealt a blow to the KDPI's position, according to Roja. In addition, the Islamic Republic appears to be currently at the peak of its strength since its founding in 1979. Yet some believe the current regional turmoil might present an opening for the KDPI.

"The regional rivalries between Iran, Turkey and Saudi Arabia have created an opportunity through which Iranian Kurdistan can become part of the bigger regional picture," Roja said.