Will Iranian Kurds be on front lines of US conflict with Iran?

The US administration appears to increasingly be looking at armed Iranian Kurdish opposition groups as part of its campaign to economically and militarily pressure Iran. 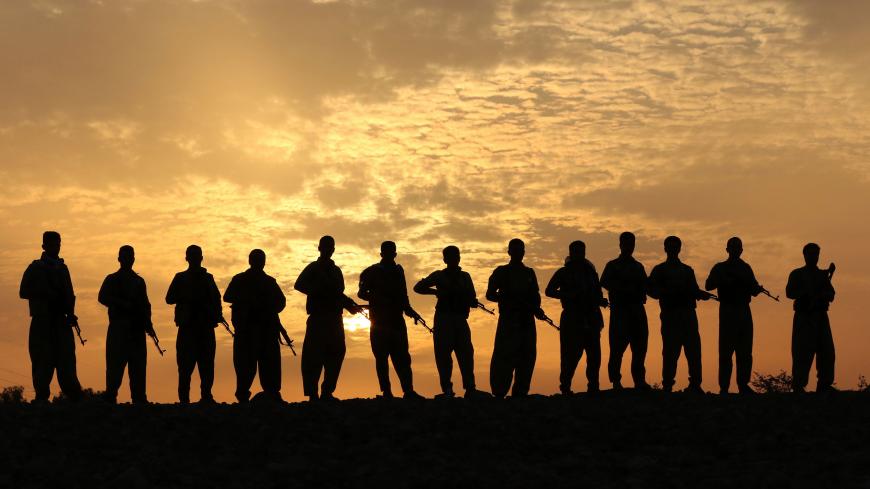 The Donald Trump administration is moving to increase pressure on Iran from Iraqi Kurdistan by appointing an Iran expert to head the US Consulate in Erbil. The move comes as armed Iranian Kurdish opposition groups have intensified their attacks on Islamic Revolutionary Guard Corps (IRGC) positions in western Iran.

Washington replaced Ken Gross, the outgoing consul general, with Steven Fagin, director of the Office of Iranian Affairs at the State Department’s Bureau of Near Eastern Affairs. The appointment appears to be part of Secretary of State Mike Pompeo’s effort to dent Iran’s ability to operate in the region amid the looming reimposition of US sanctions. The United States seeks to exert “unprecedented financial pressure” on Iran until it forces Tehran to make a “tangible, demonstrable and sustained shift” in policy, Pompeo said in a recent letter, co-authored with Treasury Secretary Steven Mnuchin, to the European Union. On July 22, Pompeo delivered a speech to a California audience, including a number of Iranian Americans, in which he attacked the Islamic Republic, comparing its leadership to a mafia.

Neighbors of Iran are under extreme pressure from the United States to stop trading with it or face consequences. “This time around, the Treasury sanctions will be enforced very, very aggressively and very comprehensibly,” US Assistant Secretary for Terrorist Financing Marshall Billingslea told reporters in Ankara on July 20 following official meetings there. “I think the Turkish government understands our position on that.”

As director of the Office of Iranian Affairs, which has several outposts around the world, including in Istanbul and Dubai, Fagin was responsible for developing, coordinating, recommending and executing US policy on Iran. He is also familiar with Iraq, Iran's important neighbor to the west, having been posted to the US Embassy in Baghdad prior to 2015 as director of the International Narcotics and Law Enforcement Office. Al-Monitor unsuccessfully sought comment on his new appointment from the State Department.

For Iran, Iraq and Iraqi Kurdistan are important trade and financial corridors where it has the upper hand vis-a-vis the United States in political, economic and military matters. Fagin’s presence in Iraqi Kurdistan is significant given that the armed Iranian Kurdish opposition groups fighting the Islamic Republic are based in the region. Indeed, Fagin met last month with Mustafa Hijri, head of the Kurdistan Democratic Party of Iran (KDPI).

The Trump administration had officially invited Hijri for a weeklong stay June 11-17 in Washington, where he held meetings at influential think tanks. KDPI and think tank sources briefed on the content of the meetings said the US government and the KDPI are sussing each other out, to gauge the seriousness of the other party. Hijri’s meeting with Fagin was the first time that a director of the Office of Iranian Affairs had met with the secretary general of the KDPI and followed deadly attacks by the group in western Iran, including one against the IRGC on June 8 in which the Kurds claimed to have killed nine Iranians.

“The Americans want to know if the Kurds are united and a serious force,” said a source at an influential US think tank, speaking on condition of anonymity. “On the other hand, the KDPI wants to know if Washington is serious about its aggressive stance on Iran.”

A senior KDPI official confirmed the statement to Al-Monitor, saying, “Yes, it is true, we want to know how serious the Americans are.” Developments following Hijri’s meetings in the United States appear to support it as well.

The KDPI has upped its attacks on IRGC positions in western Iran by increasing the number of peshmerga in the country. The KDPI has also stepped up efforts to establish an entity through which all the Kurdish parties can coordinate their efforts against Tehran. A KDPI official told Al-Monitor that the various organizations are discussing a unified peshmerga command to maximize their impact.

Meanwhile, on July 21, the Kurdistan Free Life Party, affiliated with the Kurdistan Workers Party, announced the killing of 15 Iranian soldiers near the town of Marivan, close to the border with Iraqi Kurdistan. Iranian authorities acknowledged that 11 IRGC and local Basij members were killed, with eight wounded in the clash. On July 23, Tehran threatened to attack Kurdish opposition group bases if the Kurdistan Regional Government in Iraqi Kurdistan fails to take action. Feeling the heat, Nazim Dabagh, the KRG's representative in Tehran, told VOA Kurdish on the same day that the Iranian Kurdish opposition groups based in Iraqi Kurdistan should stop causing trouble for the KRG, and that if they want to continue their struggle against Tehran, they should relocate to Iran.

Iran sees Iraqi Kurdistan as its backyard and views Kurdish autonomy in the strategic area with suspicion. The Islamic Republic has enjoyed cordial relations with the dominant Iraqi Kurdish parties since the 1980s, but the presence of American forces in northern Iraq has raised concerns. IRGC officials regularly accuse the United States of instigating the attacks being carried out by Iranian Kurdish groups.

Earlier this month, US Ambassador to Baghdad Douglas Silliman broke ground for the new US Consulate compound outside Erbil. It will be the United States' largest such compound. Siliman said the project is a “strong symbol of the continued strong relationship between the United States and the Kurdistan Region for decades in the future.” The ever-increasing US presence has caused some grumbling among locals.

The US military is expanding its presence at Bashur Airfield near the town of Harir in Erbil province. The base is located slightly more than 40 miles from the Iranian border near the Tamarchin/Haji Omran crossing. On July 21, dozens of farmers and animal herders poured into the streets of Harir to protest a ban allegedly imposed at the request of the United States to prevent locals from venturing into the mountains that overlook the airfield.

By far, however, Fagin's most challenging task will be squeezing Iran through the economies of Iraqi Kurdistan and Iraq, including preventing the IRGC from using these markets to evade sanctions, given the increasing difficulty of using Dubai and Istanbul to do so. Many Kurdish traders and top businessmen have been involved with the Iranian economy for years, and the Iranians have learned how to use their contacts to maneuver around sanctions. The Iranian tycoon Babak Zanjani, who has been sentenced to death in Iran for embezzling billions in Iranian oil money and was a close associate of the controversial Turkish Iranian gold trader Reza Zarrab, had operated in Erbil in the oil sector at the same time he was moving millions of dollars on behalf of the Iranian government to bypass nuclear-related sanctions.

“America wants to topple Iran through economic warfare,” Taher, a currency trader at the old Dollar Market in Sulaimaniyah, told Al-Monitor. “The Iranian currency has become toxic and no one wants to touch it. It is like the [Iraqi] dinar in 2002, before Saddam Hussein was toppled.”

The US State Department has not had a presence in Iran since the 1979 Islamic Revolution and therefore has had no firsthand knowledge of the country since then. By establishing the Office of Iranian Affairs in 2006, Washington had hoped to develop “on-the-ground expertise so that 10, 15, 20 years from now … we've got a cadre of Iran experts … to help us reorient our focus and our programs more directly on an important policy challenge for the United States, which is Iranian actions around the world.”

Back in 2006, Secretary of State Condoleezza Rice announced a $75 million State Department initiative to “support democracy in Iran” as part of the George W. Bush administration’s aggressive policy toward the Islamic Republic. Now, 12 years later, the United States appears to be bent on making another push at toppling the Iranian government. Washington’s investment in a new generation of diplomats with expertise on Iran could benefit the Trump administration’s tough stance against Tehran, as one of these cadres will be based in the Kurdistan region of northern Iraq with a bird’s-eye view of Iran.