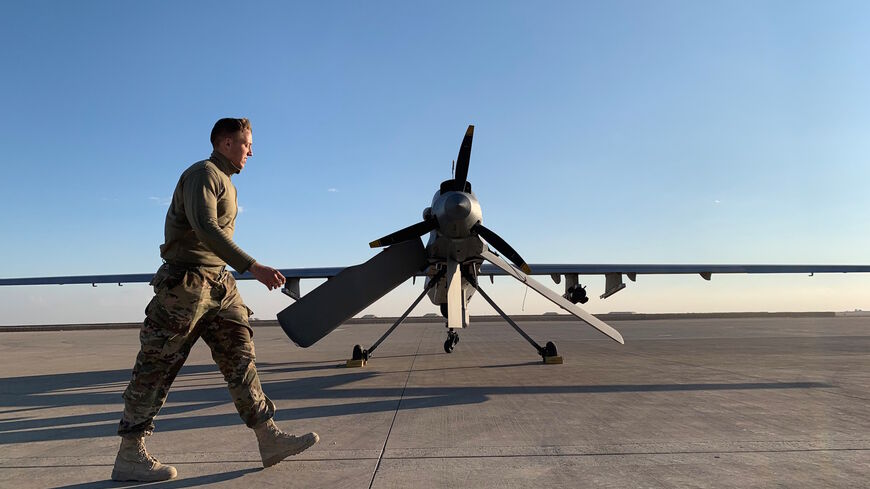 A picture taken on Jan. 13, 2020, during a press tour organized by the US-led coalition fighting the remnants of the Islamic State group shows a member of the US forces walking past a drone in the Ain al-Asad air base in the western Iraqi province of Anbar. - AYMAN HENNA/AFP via Getty Images

Iran’s demands for US forces to withdraw from a critical air base in Iraqi Kurdistan coupled with threats to expand operations against “American and Zionist mercenaries” are sending jitters across the Kurdish enclave, with many asking how far Tehran will go and what, if anything, the United States will do to stop it.

Mohammed Bagheri, senior commander in the Islamic Revolutionary Guard Corps and chief of staff of Iran’s armed forces, appeared to be emboldened by America’s controversial withdrawal from Afghanistan, calling it “a defeat and an embarrassment worse than Vietnam.” In comments to Iran TV on Sunday, Bagheri said, “Iraq and its northern [Kurdish] region should not allow America and the Zionist regime and armed counter-revolutionary groups to have training bases, TV and radio stations, camps [and] military training, then attack our border regions and assassinate our officers.”

Bagheri was alluding to armed Iranian Kurdish opposition groups that have been granted safe haven by the Kurdistan Regional Government of Iraq (KRG). However, fearing Tehran’s wrath, Iraqi Kurdish leaders keep the Iranian Kurdish groups on a very tight leash, forbidding cross-border attacks by them on Iran from Iraqi territory. Iranian Kurdish peshmerga forces' main activity is to levy “taxes” on smugglers crossing parts of the mountainous border separating Iraq from Iran that the KRG assigns to them. As such, they have a negligible physical impact within Iran, though their network of sympathizers periodically engages with Iranian forces, feeding the cycle of repression against Iran’s roughly 8 million Kurds, with Sunnis bearing the brunt.

Bagheri claimed the United States was aiding and abetting the Iranian Kurdish rebels and holding secret meetings with them at the Harir air base.

A senior Iranian Kurdish opposition official contacted via WhatsApp denied any such assignations had taken place. “When there is contact, it's more likely to occur in Erbil,” the official said.

Used in Coalition missions against the Islamic State among other things, Harir has been repeatedly targeted by Iran-backed Shiite militias, to little effect so far. Bagheri said the base, lying 70 km north of Erbil, had to be shut down, adding it was Iran’s “right” under the UN charter to pursue “terrorists” beyond its borders. His comments chime with Iran’s long-running demands that the Americans leave Iraq.

Coming just days before Iraq’s parliamentary elections, due to be held Oct. 10, the America and Kurd bashing may also be calculated to bolster Iran’s assorted proteges in the race.

Iraq’s Army Chief of Staff Abdul Amir Rashid Yarallah called his Iranian counterpart’s accusations “unjustified” in a Sept. 21 statement. Iraq “strongly rejects the use of its territory for aggression against its neighbors,” the statement said. He called on “everyone to adhere to the language of brotherhood and cooperation in joint relations.”

The threats follow a wave of airstrikes in early September, including drone strikes against Iranian Kurdish fighters positioned for taxation activities along the border. In August, in an ominous sign of the impending escalation, Mousa Babakhani, a senior member of the Kurdistan Democratic Party of Iran, was found dead in a hotel room in the city of Erbil. His body showed “serious marks of torture,” the party said, blaming the Iranian state for the slaying.

Iranian Kurdish groups are feeling increasingly vulnerable. Many lament the KRG’s hesitance to defend them publicly but cannot say so in public as they depend financially on KRG handouts. “The drones are very precise. The death threats are increasing, and local [KRG] leaders are under growing pressure to cease support for us. We no longer feel safe even in Erbil,” the Iranian Kurdish opposition official who has received multiple death threats himself told Al-Monitor.

Iraqi Kurdish officials speaking not for attribution acknowledged they were concerned by Iran’s saber-rattling. “[Bagheri] has not said much in the past. Therefore, his statements should be taken seriously,” one of the officials noted.

Washington has shown no signs of doing so. The State Department declined to comment to Al-Monitor on the matter. Biden administration officials privately contend that Bagheri’s comments are more hot air.

This is not surprising. “The administration will push back against the narrative that adversaries are emboldened as a second-order effect for the fiasco in executing its withdrawal in Afghanistan,” said Ramzy Mardini, an associate at the University of Chicago’s Pearson Institution who studies conflict resolution. “US policymakers will double down on making reassurances to allies and will downplay aggression on the part of adversaries as ordinary rather than escalatory,” Mardini told Al-Monitor.

Some analysts argue there is nothing ordinary about Iran’s military forays.

Hamidreza Azizi, a visiting fellow at the German Institute for International and Security Affairs, concurred. “Such attacks happen every now and again, apparently since some of the Kurdish groups decided to resume armed insurgency against Iran. But what makes the latest Iranian strikes different is that they appear to be more comprehensive in terms of preparing the ground politically and for public opinion, the designated scope and targets, and even the legal justification,” Azizi told Al-Monitor. The claims of secret assignations between Iranian Kurdish rebel groups and US operatives at the Harir base may also “serve as a pretext for a potential move by Iran or its allied Iraqi groups against Harir.”

Azizi continued, “I think Iran wants to kill two birds with one stone — to warn the Kurdish rebels that they cannot feel safe anywhere in Iraq and at the same time keep pressure on the KRG and the Iraqi government not to let the United States keep a military presence in northern Iraq.”

“Their habit is to push and push, and if there is no reaction they will go even further,” the Iraqi Kurdish official said, adding there was little likelihood of a US reaction. “Not with this administration,” the official said.

US diplomats and military officials have repeatedly sought to calm Kurdish fears over a possible withdrawal. “The United States is staying in Iraq, including the Kurdistan Region. We are on this journey with you for the long haul,” US Consul General to Erbil Robert Palladino said at a news conference.

The strategy is straight out of Turkey’s playbook, which has sharply escalated attacks against Kurdistan Workers Party rebels in recent months while much of the world, notably the United States and the Europeans, look the other way. “It cannot be a coincidence that every time Iranian strikes happen at the same time as a Turkish operation is going on in northern Iraq,” Azizi observed. “There must be a level of coordination between the two sides."

Correction: Sept. 24, 2021. An earlier version of this article incorrectly stated that Mousa Babakhani was found dead in Sulaimaniyah.