The Islamic Revolutionary Guard Corps is beefing up its control of Iran’s border with Iraqi Kurdistan a month after its missile strike on the headquarters of the main armed Iranian Kurdish opposition group. 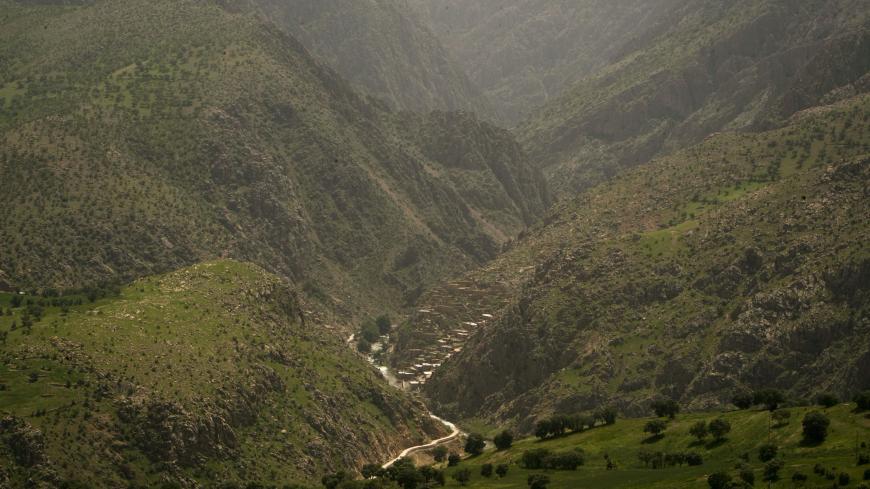 Iran’s Islamic Revolutionary Guard Corps (IRGC) is launching increasingly daring operations to degrade the capabilities of armed Kurdish opposition groups. In its latest move, it has deployed thousands of troops to difficult mountain ranges in the western part of the country used as safe havens by the groups for decades. The IRGC's operations have taken on an air of urgency since US President Donald Trump's May 8 announcement that he was withdrawing the United States from the Joint Comprehensive Plan of Action, the nuclear deal between Iran and six world powers, and re-imposing sanctions against Iran.

The IRGC mobilized thousands of troops, including Special Forces, and on Oct. 3, launched Muharram, a multi-front operation across Iran’s Kurdish region, employing helicopter gunships, heavy artillery and drones. While the operation was officially described as a drill, IRGC commanders acknowledged that the aim was also to showcase Iran’s latest sophisticated technology and to reclaim control over several strategic mountain ranges across the Kurdish region. Mohammad Taghi Oslanlou, the IRGC commander in charge of the western Kurdish areas, threatened during the operation to attack any country that supports the armed Kurdish opposition groups, which are based in neighboring Iraqi Kurdistan.

This is the first time since 1979 that Iran has attempted to fully bring the mountain ranges under its full control.

“This is a real theater. Today we carry out a drill, but also we will clear these areas completely,” an unnamed IRGC second brigadier general shouted into a microphone to some dozen senior IRGC officials watching with binoculars as the second stage of the operation unfolded on Oct. 7.

Live on Iranian television, as helicopter gunships attacked locations where Kurdish rebels were reportedly hiding, plumes of white and gray smoke could be seen rising from the slopes of the Shaho mountain range, a protected wildlife sanctuary that the second brigadier general had helpfully pointed out encompasses 1,400 square kilometers (540 square miles). Iranian-made drones circled overhead as the hammering roar of a 130-mm artillery battery and T72 tanks reverberated across the mountains.

“The counter-revolutionaries had a permanent presence here prior to [the Iranian year] 1390 [beginning March 21, 2011], and there was no possibility of … deploying [troops] to these heights,” the second brigadier general said.

“This is a kind of thorough preparation for the security forces in the region to show that they are ready at all times and for any situation,” Bahman Moradnia, governor of Iran’s Kurdistan province, told a TV crew in the mountains on Oct. 7. As the governor, dressed in military fatigues, spoke, an IRGC banner in the background proclaimed, “We will crush America under our feet.”

As tensions between Iran and the United States rise over Iran’s nuclear program and its involvement in several war-torn countries across the Middle East, the IRGC has launched a concerted effort to consolidate its control over the country’s porous western border. Tehran sees the Kurdish opposition groups, which are based in Iraqi Kurdistan and consist of several thousand fighters, as a serious security threat.

The IRGC is concerned in particular about two foes among the Kurdish groups — the Kurdistan Free Life Party (PJAK) and the Democratic Party of Iranian Kurdistan (KDPI) — which have dozens of units roaming the mountain ranges and countryside of western Iran.

Top IRGC commanders are worried about the Kurdish groups being influenced by foreign powers and have repeatedly warned the United States, Israel and Saudi Arabia against interfering in Iranian affairs through them and other rebel groups. The Kurds do not hide that they are trying to woo the Trump administration into providing them with support to weaken and eventually topple the Islamic Republic. Indeed, earlier this month, Al-Monitor reported that Komala, a small Iranian Kurdish group with communist roots, had recently registered with the Justice Department to lobby on its own behalf to “establish solid and durable relations” with the US administration.

Fearing unrest in the Kurdish areas, the IRGC began earlier this year to seriously crack down on PJAK and KDPI units operating in remote mountain areas. The armed groups responded with similar intensity.

The PJAK launched a daring raid on July 21 near the city of Marivan in which 11 Iranian soldiers were killed, and the KDPI has clashed with the IRGC on a number of occasions. In the latest major development, the IRGC on Sept. 8 fired several missiles into northern Iraq, targeting the main KDPI base, and also striking an offshoot of the KDPI, killing a number of senior officials.

The day before the missile attack, two senior members of the PJAK were killed near the Shaho range alongside two other fighters. Iran also executed four well-known Kurdish political prisoners on Sept. 8, prompting the Kurdish groups to call a general strike on Sept. 12 in Iran’s Kurdish areas.

The IRGC responded to the call for a strike by targeting those thought to be leading it. On Oct. 7, with the last part of the Muharram operation underway in the Shaho range, the unnamed second brigadier general told Iranian TV that on Oct. 3, a group of 1,500 police officers, accompanied by eight Basij battalions as well as four IRGC battalions, had launched a large-scale operation in the city of Sanadaj to thwart another strike.

Fouad Khaki Beygi, KDPI representative in the Iraqi city of Sulaimaniyah, told Al-Monitor, “Spending huge sums of money on operations like the one in Shaho at a time when people in Iran are under severe economic pressure is to intimidate the population into submission.” Khaki Beygi claimed that his party had not sustained any casualties during the Muharram operation. Al-Monitor attempted to contact a PJAK spokesperson for comment, but received no response.

The battle between armed Iranian Kurdish groups and the IRGC will likely continue for the foreseeable future as US pressure mounts on Tehran. Although it is unclear whether the Kurdish groups will manage to secure US support in their campaign against Tehran, the IRGC is taking no chances and is shoring up its defenses in Iran’s Kurdish areas.

“As it has been repeatedly said, the Iranian nation’s security is a red line for the armed forces,” Maj. Gen. Mohammad Bagheri, chief of the General Staff of the Armed Forces, said on Oct. 10 at the border with Iraqi Kurdistan, “I am warning the counter-revolutionaries who are based here and are supported by ill-wishers of the Iranian people.”