Iranian officials have been criticizing Kurdish parties from Iran who have a presence in the Kurdistan Region of Iraq, where they are regularly targeted by the Iranian military. 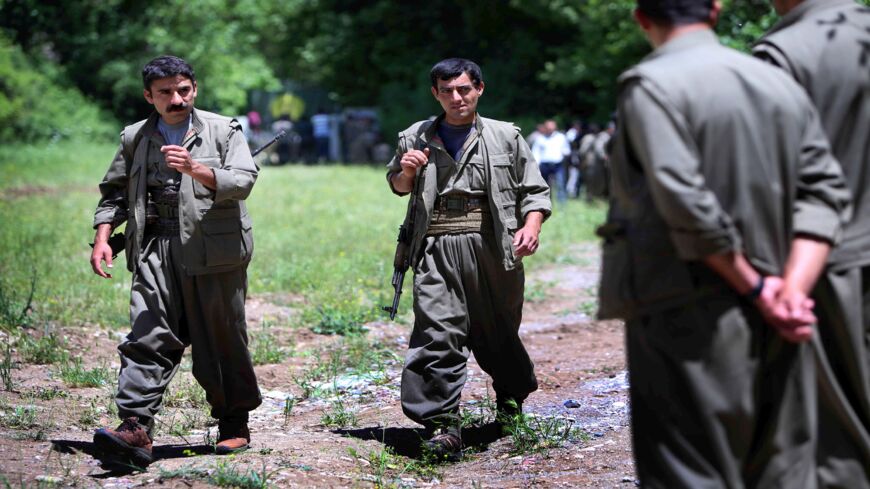 Members of the anti-Iranian group the Party of Free Life of Kurdistan (PJAK) carry their weapons as they walk on the grounds of their base deep in the Qandil Mountains of northern Iraq's Kurdish autonomous region, on May 5, 2014. - SAFIN HAMED/AFP via Getty Images

Shamkhani’s comments refer to Kurdish Iranian opposition parties and their armed wings that operate in the autonomous Kurdistan Region in northern Iraq. These include the Party for a Free Life in Kurdistan (PJAK), which is an offshoot of the Kurdistan Workers Party in Turkey, aka PKK, and the Kurdistan Democratic Party of Iran (KDP-I).

Iran has been in an on-and-off conflict with Kurdish Iranian groups within Iran and across the border in Iraq for years, including KDP-I and PJAK. The fighting has intensified recently. On Monday, an official from the KDP-I told the Iraqi Kurdish news outlet Rudaw that the group’s peshmerga forces had downed four of the 16 drones used by Iran to attack them in the Kurdistan Region recently. On Saturday, the party’s forces released a statement saying IRGC aerial attacks had been occurring for three days straight near Bradost mountain.

In August, a senior KDP-I official was found dead in a hotel in the Kurdistan Region capital, Erbil.

Sunday's comments were not unprecedented. Last week an Islamic Revolutionary Guard Corps commander said the "current situation is no longer tolerable” in reference to the cross-border conflict with Kurdish Iranian groups.

Correction: Sept. 14, 2021. An earlier version of this article attributed an incorrect date to comments from an Iranian security official.