The IRGC's rare warning has fueled fears about civilian casualties in the Kurdish villages stretching on the Iran-Iraq border. 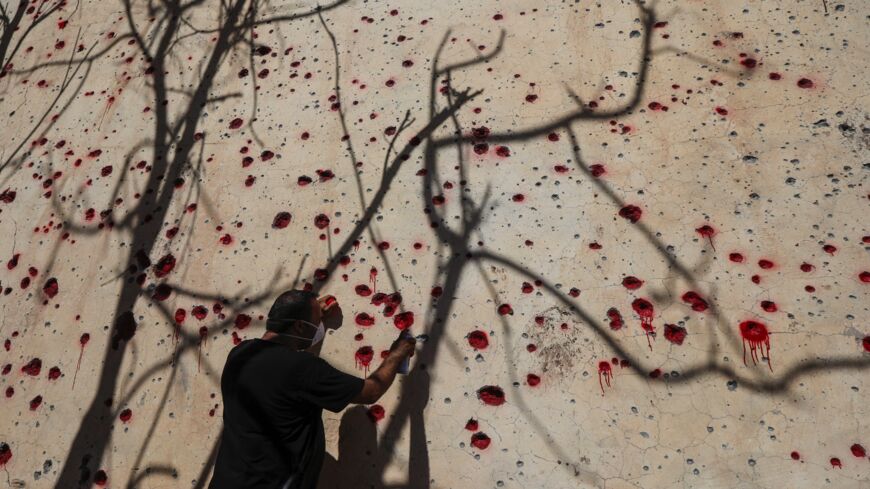 An Iranian Kurdish peshmerga member of the Kurdistan Democratic Party of Iran (KDPI) sprays red paint on holes in a wall made by shrapnel from a rocket attack days earlier at the party's headquarters in Koysinjaq, 100 kilometers east of the capital of the northern Iraqi Kurdish autonomous region, Erbil, on Sept. 12, 2018, carried out by Iran's Revolutionary Guards. - SAFIN HAMED/AFP via Getty Images

The commander of the Ground Forces of Iran's Islamic Revolutionary Guard Corps (IRGC) warned Iraq's Kurdistan Regional Government (KRG) of a "decisive and harsh response" against Kurdish fighters based in the semi-autonomous Kurdish territory.

"The current situation is no longer tolerable," said Gen. Mohammad Pakpour in reference to a recent uptick in border clashes between Iraq-based Iranian Kurdish opposition and IRGC forces on the rugged border.

Suggesting what could be a looming offensive, the IRGC general called on locals to stay away from the "terrorists' positions so that they (the locals) will stay unharmed." Pakpour advised the KRG against risking "friendly ties" with Iran by allowing the "terrorists who have built dens" to "freely roam" in northern Iraq.

The Kurdish opposition was quick to condemn the latest "threat" from the Iranian general, noting that Tehran will be responsible for any possible civilian casualties.

The Islamic Republic has repeatedly criticized the KRG for "harboring" the fighters. But the latest amped-up rhetoric appeared unprecedented. For over four decades, several Kurdish groups, most notably the Democratic Party of Iranian Kurdistan (KDPI), have been fighting for a list of demands including autonomy, political inclusion and civil rights.

While they took up arms in the aftermath of Iran's 1979 Revolution, those groups became increasingly less confrontational over time and even took a yearslong break from the conflict. In recent years, however, they have resorted to a policy of occasional cross-border hit-and-run operations. Iranian authorities have branded the exiled Kurdish opposition groups "terrorists" and have every now and then pounded their positions well inside Iraqi Kurdistan with heavy artillery and aerial raids, often leaving behind collateral damage.

In one of the largest operations ever to target the Kurdish opposition, the IRGC showered their bases inside Iraqi Kurdistan with a deadly barrage of missiles in September 2018.

At home, Iran has also pursued a far-reaching clampdown on sympathizers, putting them behind bars and in some cases sending them to the gallows. Heidar Ghorbani is currently on death row awaiting imminent execution after being convicted of "waging war on God" due to his alleged links to the KDPI.

In the late 1980s and early 1990s, Iran's intelligence organizations also chased the leaders of the Kurdish opposition in a campaign of intricate assassination plots on European soil. The KDPI's prominent leader, Abdul-Rahman Ghassemlou was gunned down in Vienna in 1989 at the negotiating table with Iranian diplomats, who the Kurds say acted as his assassins. Three years later, Ghassemlou's successor as party chief, Sadegh Sharafkandi, was shot dead at Berlin's Mykonos Restaurant, prompting a lengthy trial of Iranian operatives and triggering a diplomatic row between Germany and Iran. Despite mounting evidence, Tehran has denied involvement in both assassinations.

The Kurdish opposition says the hunt is once again back on the Islamic Republic's agenda. Only last month, Mousa Babakhani, a senior KDPI member, was kidnapped and later found dead at a hotel in Erbil, the capital of Iraqi Kurdistan. The Kurds blamed Iran-linked agents working inside the KRG territory. Tehran has dismissed the charge, claiming the 40-year-old activist was targeted in an "inner-party rift."