A senior Iraqi Kurdistan official told Al-Monitor that the talks with Ankara were “really good," and the delegation had brought two Yazidi children back with them on the plane. 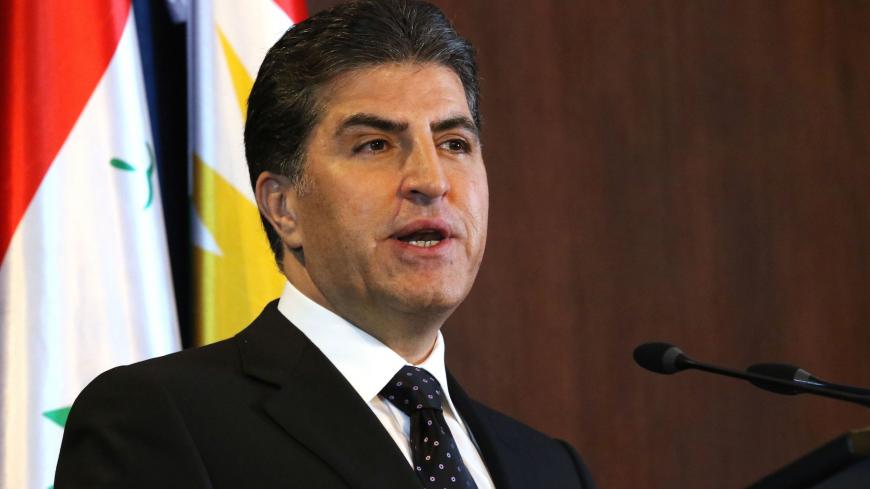 The president of the Kurdistan Region of Iraq, Nechirvan Barzani, met for over an hour with Turkish President Recep Tayyip Erdogan in Ankara today to brief him, among other things, on French President Emmanuel Macron’s visit this week to Baghdad.

Falah Mustafa, a senior Kurdistan Regional Government (KRG) official who took part in the talks, told Al-Monitor they were “really good.” He did not elaborate

Barzani returned from Ankara with two Yazidi children, a girl aged 10, and a boy 11, who had been kidnapped by the Islamic State six years ago in Yazidi dominated Sinjar province in northern Iraq, Kurdistan 24, a local news channel reported. Their parents, three brothers, and sister are still missing. Several women enslaved by the Islamic State have been tracked down and rescued in Turkey, as recently as last month. The KRG thanked Turkey in statement for helping rescue the children but it did not say how they had ended up there.

Barzani met with Macron in Baghdad on Wednesday. He also met with Iraq’s new Prime Minister Mustafa al-Kadhimi. The former intelligence chief is deeply unhappy about Turkey’s continued airstrikes against the Kurdistan Workers Party (PKK) militants inside Iraqi territory, which killed two high ranking Iraqi officers on the Turkish-Iraqi border last month. He has been lobbying Arab nations for support for what the Iraqi foreign ministry called “a united position to force Turkey to pull out its troops who have infiltrated into Iraq."

The strikes have also claimed multiple civilian lives provoking widespread anger among Iraqi Kurds. This in turn has elevated pressure on Iraqi Kurdish leaders to prevent the Turkish attacks, which they say they are powerless to do.

Kadhimi raised the issue during talks with President Donald Trump in Washington on Aug. 20 and also with Macron, sources familiar with the substance of those exchanges told Al-Monitor.

Macron is the first head of state to visit Iraq since Kadhimi formed a new government in May. Prior to the visit, Macron said he was heading to Baghdad “to launch an initiative alongside the United Nations to support a process of sovereignty.” The message was directed as much at Iran and the United States as it was at Turkey, which has several thousand troops inside northern Iraq scattered across over a dozen bases.

Abbas Kadhim, director of the Iraq Initiative at the Atlantic Council, a think tank based in Washington, lamented the rising tensions between Iraq and Turkey, saying they have important mutual interests. “The best way to handle the disputes among them is by negotiation with the understanding that, if they don’t go far, Iraq would go to the UN Security Council and other international entities,” he told Al-Monitor.

“All this can be done without disturbing the economic relations. If that fails, then the economic leverage should be used as a last resort,” Kadhim added. Iraq is Turkey’s fourth largest market for exports. Baghdad holds another critical card. Its demanding around $25 billion in compensation from Ankara in an international arbitration court for allowing the Iraqi Kurds to export their oil independently of Iraq’s central government via a purpose built pipeline running from oil fields in Iraqi Kurdistan to Turkey’s southern Mediterranean port of Ceyhan. The court is likely to rule in Baghdad’s favor. The tribunal has delayed its decision because Iraq asked it to do so in response to Ankara’s request for time.

It’s unclear whether Barzani’s trip to Ankara was preplanned. Sources in Barzani’s entourage were adamant that it was scheduled in advance, part of an effort “to clear the air” between the sides.

“Internally divided and still unrecovered from the 2017 independence referendum, the KRG strives for relevance,” contended Bilal Wahab, a Wagner fellow at the Washington Institute for Near East Policy. “A risk that concerns KRG leaders is being sidelined by a possible deal between Ankara and Baghdad over borders, oil and the PKK."

“Yet, the KRG can play a significant role in helping both sides. This is manifest in Sinjar, which has become a new Kirkuk in terms of complexity. The KRG has also sought relevance by actively engaging coordination among Syrian Kurds,” Wahab told Al-Monitor in emailed comments.

Wahab was alluding to the oil rich province which the Kurds lost to Iraqi forces following their ill-fated referendum, and which the Kurds say rightfully belongs to them.

Turkey has been targeting Sinjar with armed drones on the grounds that the PKK uses the area as a logistical corridor to link up its bases in the Qandil mountains bordering Iran with Kurdish-governed northeast Syria. The instability is preventing tens of thousands of Yazidis displaced by IS to return to their homes in Sinjar. The issue is likely to have come up during Barzani's talks with Erdogan.

Ramzy Mardini, an associate at the University of Chicago's Pearson Institute, which studies conflict resolution, contends that Barzani's visit to Ankara was prompted by Macron's visit to Baghdad.

“Given the competition between France and Turkey over Libya and the eastern Mediterranean, it would only be incumbent on Erdogan to try to balance out Macron’s warming relations with Iraq’s elites, while also gleaning on what the French president is up to with his neighbor," Mardini told Al-Monitor.

Mardini continued, “It's hard to see how Erdogan doesn’t interpret Macron’s use of his sovereignty initiative against foreign interference in Iraq as a way of undermining Turkish foreign policy." He pointed out that Macron’s successful trip to Baghdad comes weeks after Turkish Defense Minister Hulusi Akar was denied a scheduled visit given Turkey’s ongoing military operations in northern Iraq. Moreover, in recent years the French president’s relations with the Kurds have warmed, with exchanges in delegations and visits in Paris and Erbil.

“Given its stronger relationship with Baghdad, France is in a unique position to play an external mediating role between the KRG and the Kadhimi government that Turkey is in no position to fulfill. This gives the Kurds an important outside relationship other than Ankara that they need maintained and strengthened, especially now given their current economic woes. France, not Turkey, helped mediate to break the deadlock between the governments in Erbil and Baghdad that followed the Kurdistan referendum for independence. I suspect the visit of France’s president, especially during the current dire circumstances for Iraq, is only likely to enhance France’s mediating role and influence,” Mardini concluded.

Macron has emerged in recent months as Erdogan’s biggest bugbear. The French president has pushed back against Turkey’s muscle-flexing in the eastern Mediterranean, sending warships in support of Greece. France and Turkey have also butted heads over Libya. Turkey accuses France of backing the eastern warlord Khalifa Hifter.

Cavusoglu, who held a breakfast meeting with Barzani today, said “In Libya they (France) supported the putschist Haftar and made a grave mistake. Things changed, balances shifted, Hifter was defeated and Macron became hysterical."