The oft-disunited Kurds of Iraq, Syria and Turkey are united against Turkey's invasion of areas in Syria where Kurds had achieved self-rule. 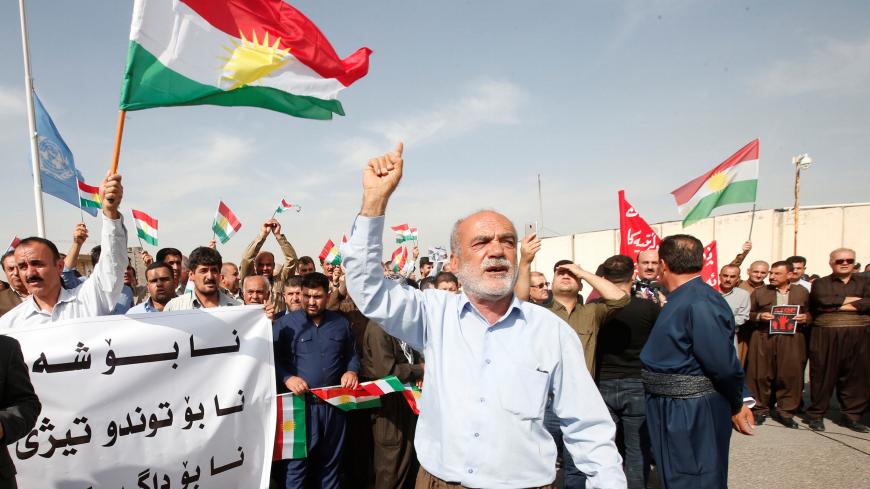 Iraqi Kurds protest against the Turkish offensive against Syria during a demonstration outside the United Nations building in Erbil, Iraq, Oct. 12, 2019. - REUTERS/Azad Lashkari

An oft-cited reason for why the Kurds do not have their own state is the unremitting disunity among themselves.

But Turkey’s Oct. 9 assault against a US-backed Kurdish militia in northeastern Syria has prompted an unprecedented display of pan-Kurdish solidarity. The Iraqi Kurds are at the vanguard of protests against Turkish belligerence, with many boycotting Turkish products. Unusually, their leaders are taking a harder line too.

The chill was on display — not coincidentally, some speculated — Oct. 29, which marked the 96th anniversary of the founding of modern Turkey. Masrour Barzani, prime minister of the Kurdistan Regional Government (KRG), made it known that he had “no plans to visit Turkey this week.” The news leaked by a prime ministry official was apparently in response to comments by Turkish presidential spokesman Ibrahim Kalin, who suggested that Barzani would be visiting Ankara — on Oct. 30, according to the Turkish media — but that it wasn’t clear whether he would be received by Turkish President Recep Tayyip Erdogan. ,

Turkey remains critical to the KRG’s economic well-being, some argue its survival. Oil, the Kurdish statelet’s main source of income, is exported through a pipeline that runs to loading terminals on Turkey’s Mediterranean coast.

The lack of clarity over whether he would get to see Erdogan may have prompted the notoriously proud Barzani to scrap what would have been his first official trip to Ankara as prime minister. But to millions of Kurds it was a blistering rebuke of Turkey’s ongoing campaign against their Syrian brothers in the People’s Protection Units (YPG).

The KRG parliament has called on Turkey, in a statement, “to halt its military campaign in Western Kurdistan” — a reference to Syria's Kurdish regions. Mainstream Iraqi Kurdish outlets Kurdistan24 and Rudaw have been zealously chronicling atrocities committed by Turkish-backed rebel forces since the start of Operation Peace Spring.

“I believe this moment represents the peak in sentiments of Kurdish national unity,” said Guney Yildiz, a nonresident fellow at the Middle East Institute.

Aydin Selcen, a political commentator who served as Turkey’s first consul general to Iraqi Kurdistan, concurred. He told Al-Monitor that although Iraqi Kurdish political parties are famously fractured, Turkey’s incursion has “managed to harvest a rare union among all the political actors in the Kurdistan Region of Iraq.”

Ramzy Mardini, a scholar at the US Institute of Peace, told Al-Monitor that even though the Kurdistan Democratic Party (KDP) in Iraq and the YPG “are rivals, what is happening in Syria transcends political rivalries. Iraqi Kurds identify with Syrian Kurds, I think that’s hard to miss.” The KDP is presided over by Barzani's father, Massoud, the former president of the KRG and the eminence grise of Iraqi Kurdish politics.

Mardini was alluding to competing claims for leadership of the more than 30 million Kurds inhabiting Turkey, Syria, Iran and Iraq. The main contenders are the Barzanis and Abdullah Ocalan, the imprisoned leader of the outlawed Kurdistan Workers Party (PKK), which has been fighting the Turkish army for the past 35 years, initially for an independent Kurdistan carved out of Turkey, Iran, Iraq and Syria. The PKK now says it will plump for Kurdish autonomy within Turkey’s borders.

The YPG is the PKK’s Syrian affiliate, which is why Turkey is infuriated by the US alliance with the group. Mardini said, “A meeting in Ankara [between Masrour Barzani and Erdogan] would have placed the emphasis on KDP-Turkish relations, and I don’t think it's good domestic politics for Barzani at the moment — not while Kurds are dying in Syria. I think Kurdish nationalism is a much more powerful force in shaping political motivations than alliances, even important ones like with Turkey.”

The Iraqi Kurdish government and the KDP in particular have faced sharp criticism over what is seen as indulgence of Turkish impunity in the battle against the PKK. Endemic corruption and economic instability rampant across the rest Iraq have fueled protests in the KRG. A wrong step on Syria could reignite the fuse.

Since 1991, when the Iraqi Kurds began running their own chunk of Iraq under US protection, Turkey has kept up attacks against PKK guerrillas holed up in the mountains on the Iraqi and Iranian side of the border. And for a while, the KDP and its main political rival, the Patriotic Union of Kurdistan, under pressure from Turkey, took up arms against the PKK.

Turkey is now targeting Yazidi-dominated Shengal (also known by its Arabic name Sinjar) near Syria, all part of a strategy to disrupt supply lines between the PKK and the YPG. Scores of civilians have either died or been wounded in Turkish airstrikes. Iraqi Kurdish leaders routinely blame the PKK for inviting Turkish retribution by using their territory as a base to launch their attacks on Turkey, part of a delicate balancing act aimed at placating Turkey.

But now their ire is being leveled at Turkey.

The first shot was fired by the elder Barzani in an Oct. 9 tweet. “We are very concerned about the recent developments in Western Kurdistan. We are in contact with several channels and we will do are our utmost to ensure that the people of Rojava [Syrian Kurdistan] are not subjected to any more disasters.” Both Masrour Barzani and Nechirvan Barzani, the president of the Iraqi Kurdistan Region, chimed in with statements of their own.

Mazlum Kobane, the commander in chief of the YPG-led Syrian Democratic Forces, thanked the KRG and “especially Massoud Barzani” for his support. The PKK has made similarly conciliatory noises.

The “channels" Barzani senior was likely referring to were EU leaders, notably French President Emmanuel Macron. A lawmaker from Turkey’s largest pro-Kurdish party with close knowledge of Barzani’s back channel diplomacy told Al-Monitor, “Massoud worked very hard to get European governments, especially Macron and the Germans, to pressure Turkey to halt its offensive.”

Macron has been among the fiercest critics of the Turkish invasion, charging that it will help the Islamic State rebuild its caliphate. He is said to have intervened personally to get a Syrian Kurdish child who was severely burned in the Turkish assault flown to France for medical treatment at Massoud Barzani’s behest.

Turkey has lashed out at France but it has yet to publicly denounce the KRG.

This speaks to a reluctance on both sides to unravel relations beyond repair. The Middle East Institute’s Yildiz observed, "The official line of the Iraqi Kurdish government was still much weaker against Turkey in comparison to most Arab states and some European governments.”

For Turkey, the KRG remains a critical gateway to Iraq and the Middle East. Friendship with Iraq’s Kurds allows Ankara to claim its not “anti-Kurdish” but rather “anti-PKK.” Selcen, the former Turkish envoy, said, “Mutual dependence and the leadership of President Nechirvan Barzani will be the two dominant factors to prevent relations between the two sides from being further derailed.” Nechirvan Barzani, who is hailed as the pragmatist, is Turkey’s principal interlocutor. More critically, Erdogan is said to like him.

None of this has stopped Ankara from trying to subvert revived plans to convene a pan-Kurdish congress first floated in 2013 to be presided over by Massoud Barzani in either Dahuk or Erbil. The Kurdish politician, who asked not to be identified in order to speak freely, confirmed that his party was involved in the efforts to assemble numerous Kurdish political parties from Turkey, Syria and Iraq “as soon as possible” in a bid to harness “the spirit of unity” engendered by the Turkish invasion.

But for the Iraqi Kurds, it is not just about solidarity.

Their greater worry was articulated by another Barzani, the former head of the KDP leadership Council, Adham Barzani. He told Voice of America’s Kurdish-language service in an Oct. 13 interview that if Turkey’s latest anti-Kurdish operation succeeds, Iraqi Kurdistan will be next.

Ruwaydah Mustafa is an Iraqi Kurdish doctoral candidate at Kingston University, London, who is focusing on democracy and state building. She told Al-Monitor, “The [September 2017] Kurdistan independence referendum strained ties with Turkey and it's still recovering from that.” The Iraqi Kurds could once count on the United States for its support. But events in Syria and Washington’s firm opposition to the referendum have shown that “the United States is no longer the reliable ally the Kurdish people once perceived it to be.”

The other big worry for the KRG is the potential influx of Syrian Kurds fleeing the Turkish offensive. KRG officials say they are bracing for as many as 300,000. As of Saturday, some 13,638 displaced Syrian Kurds had sought refuge in the KRG, which is already heaving under the financial and logistical strain of some 1.2 million people displaced by the war against the Islamic State.

“After eight years of civil war in neighboring Syria, and six years into our own Islamic State crisis in Iraq, it seemed we were reaching a level of relative stability and opportunities for people to return,” said Sherri Kraham Talabany, president of the SEED Foundation, an Erbil-based charity. Talabany told Al-Monitor in an email, “This new wave of targeted attacks against the minority Kurdish, Yazidi and Christian population is truly devastating. The chaos, disruption to the political order, the lack of control over IS prisons, all are deeply destabilizing to the region and poses enormous risks not just to Kurdistan and Iraq, but the world.”