Talabanis strip their cousin of all powers amid a power struggle in the Kurdistan Regional Government's Patriotic Union of Kurdistan Party. 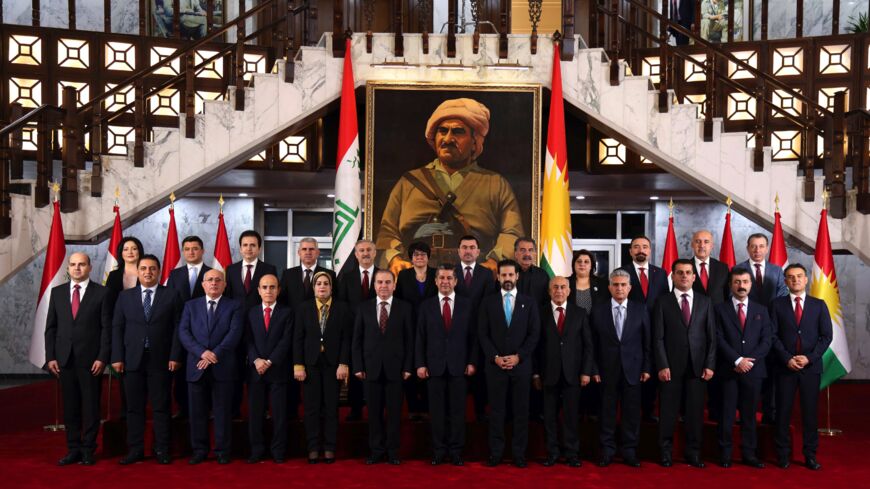 Members of the Cabinet of the Kurdistan Regional Government headed by Prime Minister Masrour Barzani pose for a photograph in Erbil, the capital of northern Iraq's Kurdish autonomous region, on July 10, 2019. - SAFIN HAMED/AFP via Getty Images

The power struggle for leadership of Iraqi Kurdistan’s second most powerful political party has escalated once again, as one of the contenders declared he was not pulling out of the fight, raising fears of protracted instability in what remains the most secure and Western-friendly part of Iraq.

Lahur Talabani, the ousted co-chair of the Patriotic Union of Kurdistan (PUK), declared Tuesday that authorities had issued a warrant for his arrest and dozens of men both armed and unarmed had gathered outside his home in Sulaimaniyah over the past two days in a bid to scare him into leaving the country.

He was shorn of all of his powers in a bloodless coup by his cousins Bafel Talabani and Qubad Talabani last month. He said he had no intention of caving and would “face this plot head-on” and “will not leave my nation until my last breath.”

The drama is unfolding against a backdrop of mounting public fury with the elites that share power in the Kurdistan Regional Government — namely, the Kurdistan Democratic Party (KDP) led by the Barzani family, and the PUK that was founded by Bafel and Qubad’s late father, Jalal Talabani. Nechirvan Barzani is the president of the Kurdistan Region of Iraq, and his cousin Masrour Barzani is the prime minister. Qubad Talabani is the deputy prime minister and, unlike Lahur Talabani who is openly hostile to the Barzanis, has excellent relations with the KDP.

Since 1991, Iraq's long-persecuted Kurds have been running their own affairs under US military protection. However, the ruling dynasties are seen as having squandered the Kurds’ hard-won autonomy in pursuit of their own interests. And the quarrels over power and wealth that once bloodily pitted the KDP against the PUK seem now to be infecting the families themselves, while ordinary citizens struggle to make ends meet and a steady stream of youths abandon the country in search of jobs.

Unlike the Barzanis who are fiercely private, the Talabanis have taken to airing their differences in public in the succession battle that followed the death of Jalal Talabani, post-Saddam Iraq’s first president, in 2017. Bafel Talabani and Lahur Talabani struck a power-sharing agreement in 2020, principally to fend off challenges from outsiders and consolidate family power over the PUK. But the arrangement was doomed from the start, many say.

US officials have reportedly warned Bafel Talabani and his brother against any further escalation of a kind that could lead to a violent showdown. The United States has several bases in the Kurdish-controlled region, which have come under recent attack from Iran-backed Shiite militias. Conflict among the Kurdish groups would create further vulnerabilities and opportunities for the Islamic State as it seeks to regain lost ground.

Ramzy Mardini, an associate at the University of Chicago’s Pearson Institute who has deep knowledge of the region, said, “I believe US policymakers don’t want to get involved, at least publicly, to avoid the appearance of taking one side over the other in an internal power struggle within the PUK. There are ongoing efforts to mitigate the tensions behind the scenes and to encourage the dispute to be resolved without violence.”

Mardini added, “The problem is that private calls and messages between individuals are not going to add much credibility to warnings and policy positions. If the US made their stance public and official, it might help both sides to leverage it as an exit option to save face and de-escalate. There’s enough interest to go around in Iraqi Kurdistan to avoid any armed conflict, but it needs to be activated and mobilized around a focal point.”

While the commonly accepted wisdom is that the feud is, at root, a family affair, waning US influence in Iraq has bred an environment where a rebalancing of power pitting local actors against the other became inevitable, argues Arzu Yilmaz, a visiting scholar at Hamburg University who has spent long years studying Iraqi Kurdistan. “The PUK was the weakest link, so it’s no surprise that this is where it started,” she told Al-Monitor.

At first, Lahur Talabani appeared to have thrown in the towel — at least temporarily. In a July 19 address, he said he would step aside until he could clear his name. Bafel Talabani, however, has kept up the pressure on his cousin. He has replaced Lahur Talabani’s proteges in the security services and shuttered several of his cousin’s media outlets and businesses. Media close to Bafel Talabani continue to accuse Lahur of engaging in extortion, smuggling and attempted murder.

On Monday, he said he would be seeking legal recourse through the local judiciary in Sulaimaniyah. The judiciary refused to take up his case. “I don’t think Lahur’s situation looks very promising now; all of the PUK old guard are on Bafel’s side, and others in the leadership are switching to his side as well, as they see Lahur losing,” said Abdulla Hawez, a London-based researcher. “Many people have tried to mediate, but Bafel has said there is ‘not even a 1 percent chance’ of reconciliation. Lahur’s immediate priority is no longer to regain his old position but to be able to stay in Sulaimaniyah,” Hawez told Al-Monitor.

The PUK gathered under Bafel Talabani’s leadership today to evaluate the situation but gave little away about the deliberations. It said the main topic of discussion was “to maintain security in the Kurdistan region and Sulaimaniyah.”

Lahur Talabani’s salvoes against veteran PUK leaders likely accelerated his fall. However, he still commands considerable support among middle- and lower-ranking cadres of the PUK. His anti-KDP rhetoric resonates with the people of Sulaimaniyah, where anti-KDP sentiments are as defining as anti-PUK feelings are in KDP-controlled areas. Qubad Talabani’s friendship with the Barzanis rubs many the wrong way.

“[Lahur] still has measurable support within the party, particularly the cadres and below at the grassroots. His statement on Monday was significant because it seemed to throw the process out of the window that he himself outlined for stepping down,” observed Winthrop Rodgers, a senior editor at NRT, a Sulaimaniyah-based opposition outlet. “So if he did leave, we don’t know how that would happen. The alternatives are either that he stays or he’s pushed harder [to leave]. We don’t know which one it will be,” Rodgers added.

And that is profoundly unsettling for millions of Iraqi Kurds who fear a resumption of the dreaded “brakuji,” the Kurdish word for fratricide. “I don’t believe the purge unfolded in ways the brothers expected, not with the cousin calling their bluff and standing his ground,” said the Pearson Institute’s Mardini. “Neither side wants a fight, but armed conflict cannot be ruled out.”