Patriotic Union of Kurdistan co-chair Lahur Talabani has been peacefully ousted, and Ankara is clearly happy about the turn of events. 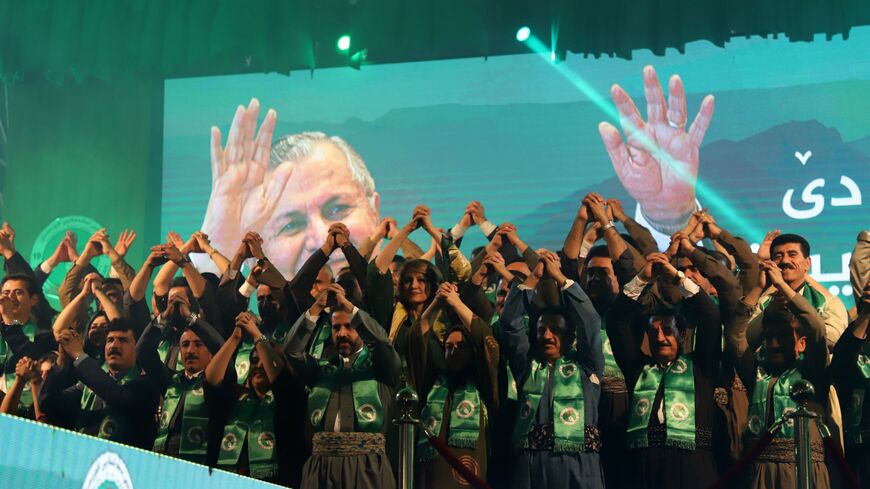 Supporters of Qubad Talabani, deputy prime minister of the Kurdistan Regional Government and head of the electoral list of the Patriotic Union of Kurdistan, cheer for him as he addresses them on the last day of campaigning for the Kurdistan regional election, in the Iraqi Kurdish city of Sulaimaniyah, Sept. 27, 2018. - SHWAN MOHAMMED/AFP via Getty Images

Lahur Talabani, the ousted co-chair of the Patriotic Union of Kurdistan (PUK), has signaled that he will not fight back, saying the succession for the leadership of Iraqi Kurdistan’s second largest party is not “worth shedding blood” over. He was addressing an event held yesterday in the PUK’s administrative capital, Sulaimaniyah, attended by families of Peshmerga fighters slain in war.

Talabani, was effectively stripped of power in favor of his cousin Bafel Talabani over the past few weeks, his allies in charge of the intelligence and counterterrorism units were removed from their posts, his media outlets shuttered and companies seized. The moves have been described as a bloodless coup and were said to have been supported by the PUK’s chief rival, the Kurdistan Democratic Party (KDP), the dominant power in the Iraqi Kurdistan Region.

The aura of defeat was palpable as Lahur Talabani held up a white piece of paper and said, “Bafel is my blood. My [feelings for him] are as pure as this paper.” Talabani went on, “I’ve remained calm so as not a single child’s finger bleeds. I bear no grudge. I will defer to the will of the PUK leadership.”

The lightning speed with which Lahur Talabani’s wings were clipped has had a bombshell effect with pundits struggling to make sense of it all. Lahur Talabani initially pointed the finger of blame at the KDP, which is led by the Barzani family. The Barzanis have been seething at Lahur Talabani’s irreverence toward them, in particular with regard to the KDP’s alliance with the “the Ottomans" — in other words, with Turkey. Such language plays well in Sulaimaniyah, where anti-KDP feelings run strong. But Lahur Talabani apparently overestimated his own power, which has been amplified by social media.

It’s too early to say what lasting impact Lahur Talabani’s departure will have, or indeed whether it's permanent, but an immediate beneficiary is Bafel Talabani’s younger brother Qubad, who serves as deputy prime minister in the Kurdistan Regional Government. His smooth relations with the Barzanis, and more broadly with Western governments and Iran, make Qubad Talabani a valuable ally for his elder sibling whose unpredictable nature has raised worries over his rise. The pair are the sons of Jalal Talabani, the late president of Iraq and the founder of the PUK who died in 2017. The battle for succession in the party has been simmering ever since he fell ill in 2012.

Ankara is clearly happy about the turn of events. Turkey’s state-run Anadolu News Agency predicted that further consolidation of Bafel Talabani’s power will “not only prevent the Iraqi central government from benefitting from divisions among [the KDP and the PUK] but also diminish Iran’s influence in the region to some degree.” It further opined that Lahur Talabani’s loss of influence over the PUK might cool the party’s relations with the Kurdistan Workers Party (PKK). The latter outcome is clearly something Turkey desires, as it's long accused Lahur Talabani of offering sanctuary to the PKK.

It’s an open secret that the PKK has far more freedom to operate in Sulaimaniyah than areas under the KDP’s control, where Turkish forces are continuing a wide-scale and unprecedentedly effective offensive against the militants that was launched in April. KRG sources speaking not for attribution charged that under Lahur Talabani’s stewardship, PKK militants were provided medical care in and allowed to travel through Sulaimaniyah to their headquarters in the Qandil mountains bordering Iran.

Will Bafel Talabani move against the PKK? That is clearly Ankara and the KDP’s expectation, though it is unlikely to sit well with the local population in Sulaimaniyah or elsewhere in Iraqi Kurdistan, for that matter. “I think that like in all parts of the Kurdistan Region, anti-Turkish sentiment is broadly held — if relatively shallow in practice — and that the PKK occasionally benefits from that. Pro-PKK expressions like all kinds of political expressions are simply more visible in the relatively more permissive environment in Sulaimaniyah,” explained Winthrop Rodgers, a senior editor at NRT, an opposition media outlet based in Sulaimaniyah. Rodgers continued: “Brakuji is never popular. It would also touch of accusations that the PUK is submitting itself to the KDP (and by extension Turkey), which would also be unpopular.“ Brakuji means fratricide in Kurdish.

Either way, the PKK is apparently feeling the heat.

Cemil Bayik, co-chair of the executive council of the Kurdistan Communities Union under which the PKK and its affiliates operate, told Kurdish-language Sterk TV in an interview aired July 15 that his group does not “want to fight with the KDP in any way.” His tone was markedly different from previous PKK statements assailing the Barzanis and the KDP for their alleged complicity with Ankara.

No such dovishness was detected in Bafel Talabani, who declared in a July 15 Facebook post that the purge in the PUK was to end abuse of party positions for personal gain, including “smuggling, extortion, threats and spying." They were Bafel Talabani’s first comments since elbowing his cousin out of the way.