An Iranian Kurdish opposition group has registered to lobby Congress and the Donald Trump administration. 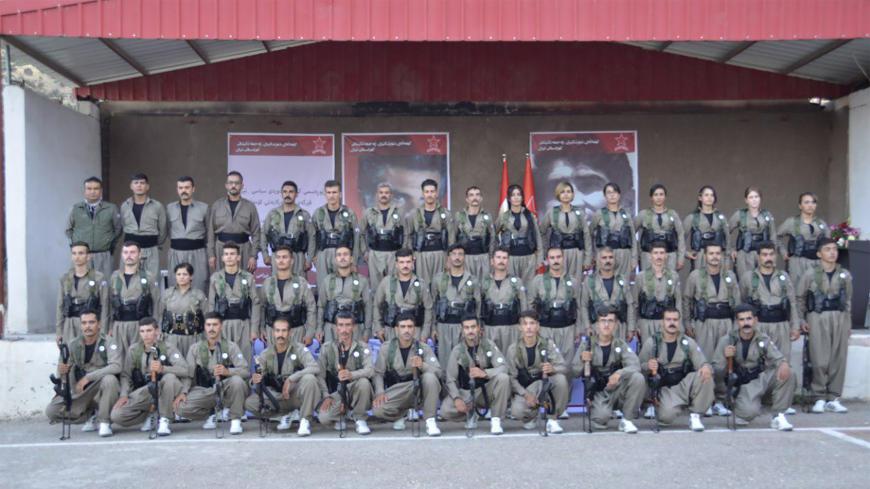 Soldiers from the Komala Party of Iranian Kurdistan are shown at their graduation ceremony, Sulaimaniyah, Iraqi Kurdistan, Sept. 3, 2018 - Twitter/@Komala_english

An Iranian Kurdish rebel group is the latest faction to jump on Washington’s anti-Tehran bandwagon.

The Komala Party of Iranian Kurdistan, an armed group with communist origins exiled in northern Iraq, registered with the Justice Department late last month as a lobby aiming to “establish solid and durable relations” with the Donald Trump administration. The registration hints at a more public role for a group that has left a digital track record of foreign advocacy on Capitol Hill dating back several years.

Salah Bayaziddi, a Canadian citizen who identifies as a journalist and doctoral candidate in federal filings, will lead the effort on a volunteer basis, writing op-eds, meeting US officials and engaging Washington think tanks. In a September filing with the Justice Department, Komala leader Abdullah Mohtadi said the group “seeks to represent the human rights of Iranian citizens and promotes the democratic representation of minority voices in Iran.” Komala has a track record of insurgent activity against the Iranian government.

Bayaziddi, who identifies as the US representative for Komala on Twitter, said he registered as a foreign agent with the Justice Department to ensure his meetings with government officials would be considered aboveboard.

“I wanted to be legal. If I met with the US government or an agency, [I wanted] everything to be known and legal in this country,” Bayaziddi told Al-Monitor in a phone interview. “I want to live here in this country in a legal way, not to be unknown or something.”

Asked about his recent registration under the Foreign Agents Registration Act, which tracks lobbyists for foreign political interests, he said, “I didn’t know about this FARA thing until two months ago.” Bayaziddi said that friends introduced him to the idea of registering as a lobbyist as he seeks to get the party recognized in Iran, where it is banned.

Yet social media accounts for Bayaziddi and other Komala officials show that the group has courted members of Congress since at least 2015. Mohtadi is notably seen posing for pictures with Sen. Ted Cruz, R-Texas, and Reps. Louie Gohmert, R-Texas, Dana Rohrabacher, R-Calif., and Ed Royce, R-Calif., the chairman of the House Foreign Affairs Committee.

The group has remained active in recent months after Trump withdrew from the Iran nuclear deal. In June, Komala and its historic rival, the Kurdistan Democratic Party of Iran (KDPI), met with a coterie of State Department officials, think tankers and members of Congress during a six-day trip to Washington, Al-Monitor reported at the time. Bayaziddi said only KDPI representatives attended meetings with US government officials over the summer trip, which he said was sponsored by the Council on Foreign Relations and the London Center for Policy Research, a pro-Trump think tank based in New York.

Komala’s registration comes as Iranian opposition groups see a window of opportunity to tighten ties with the Trump administration as it makes a strong rhetorical push against Tehran. The umbrella group National Council of Resistance of Iran notably hosted Trump allies Rudy Giuliani and Newt Gingrich at its yearly gathering in Paris in June, before the event was overshadowed by a foiled bomb threat.

Policy experts who met Bayaziddi at the time said the Kurdish representatives didn’t come with specific asks for the US government. Instead, the June trip was mostly a fact-finding mission “to understand what the Trump administration wants,” said Bilal Wahab, a fellow at the Washington Institute for Near East Policy who met with the Iranian Kurdish delegation in June.

“Being Iran’s opposition is like riding a tiger,” Wahab said. “You can’t get off. They want regime change, and they’d be eager to sign up to a regime change project.”

Komala may see an opportunity to capitalize on an uptick in pro-Kurdish and counter-Iran rhetoric from Washington after an array of top US officials castigated Tehran at the UN General Assembly last week.

National security adviser John Bolton said the United States would keep 2,200 troops in Syria until Iranian forces left the country. And Trump himself, in a press conference on the sidelines of the UN gathering, called Syrian and Iraqi Kurds “great fighters” who provided “a lot of help” in the American-led fight against the Islamic State.

The Iranian Kurds have suffered at the hands of Tehran in recent years, said Geneive Abdo, a resident scholar at the Arabia Foundation, a Washington think tank close to Saudi Arabia.

“Now that there’s a broader Kurdish movement, that’s what the Iranians are afraid of,” Abdo told Al-Monitor. “The fear of the Iranians now is that the growing power of Iraq will affect their own Kurdish population, and that’s what they are trying to minimize.”

Even though Iranian opposition groups have set up informal channels to link their efforts, experts say it’s not clear that either Komala or the KDPI have the arms or the manpower to mount a serious challenge to Tehran.

Komala’s flag sports a red star and arching Persian script with Soviet-style typography that point to its leftist roots. Bayaziddi says the group sees itself “as a democratic force,” not as Marxist or socialist. He added that he wants the group to “be separate from an armed struggle,” even though its Twitter page showed off the graduations of new Kalashnikov-clad peshmerga fighters as recently as June.

Wahab, speaking to Al-Monitor on WhatsApp from Iraqi Kurdistan, said the possibility that Komala would govern is remote. He said the group will likely promote its insurgent network on the ground in Washington, in hopes of getting support for an uprising similar to the Iraqi Kurds’ armed movement against Saddam Hussein in 1991. But in light of recent protests, Iran is making it more difficult for opposition groups to mobilize.