Parts of Iraqi Kurdistan are witnessing turmoil as people living primarily around Sulaimaniyah are demonstrating against the Kurdistan Regional Government, but what's behind the turbulence? 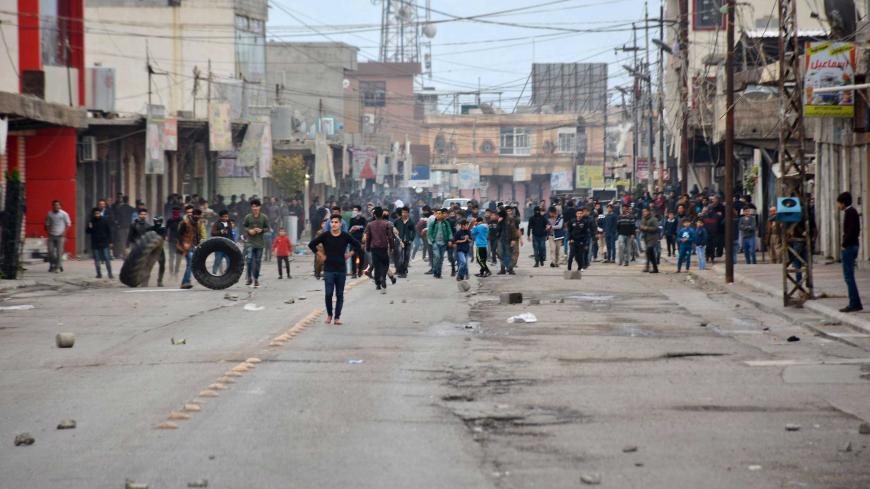 Demonstrators gather on a street in the autonomous Iraqi Kurdistan region, as protests against political corruption raged for a third day despite a clampdown by security forces after five people were killed, Ranya, Iraqi Kurdistan, Dec. 20, 2017. - SHWAN MOHAMMED/AFP/Getty Images

DIYARBAKIR, Turkey — Twenty-six years after what Kurds call the “Raperin” (Uprising) occurred in the town of Ranya in northern Iraq, which pitted the Kurds against the Iraqi Baath regime, gunshots are once again being heard in the region. This time, however, the targets are different. This time, Kurds are attacking other Kurds. Street protests that were started by civil servants whose salaries have not been paid for months erupted in Sulaimaniyah Dec. 18 and spread like fire to many towns including Ranya.

Photographs spread of Kurdish people demonstrating for their salaries but also occasionally shouting “freedom for Kirkuk.” In Koye, a town close to the Kurdish capital city of Erbil, security forces intervened against protesters in front of government offices, but demonstrators managed to set part of a building on fire. Demonstrators then set fire to the premises of Gorran, the Kurdistan Democratic Party (KDP), the Kurdistan Islamic Union and the Kurdistan Islamic Union, as well as other official buildings. Similar incidents were reported in other Kurdish towns.

Street protests spread to Halepce, Kifri, Ranya, Pencewin and their peripheries. At Ranya, security forces intervened forcibly. The Turkish media reported that five people were killed and 93 were wounded.

The demonstrators don’t appear to be organized. That makes manipulation of the popular reactions rather easy.

Everyone agrees that economic hardships set off the demonstrations and consequent clashes, but opinions and fears vary on the course of events. Associate professor Kamurqan Mantik of the political sciences faculty of Salahuddin University of Erbil said the region needs change.

“People of Kurdistan are living in a deep crisis. The model of the political rule in Kurdistan has become obsolete. Political parties of the region have outlived their times,” Mantik told Al-Monitor.

“But this lack of organization is dangerous. We don’t know who is behind the incidents. Will the incidents expand to become a popular uprising? There is a danger of bloodshed. … Another danger is Baghdad. The Iraqi government may wish to restore its authority and eradicate Kurdistan as an entity,” Mantik said.

Mantik said demonstrations will be ineffective as long as they stay away from areas controlled by the KDP: “The KDP today controls most of the government. So far, the uprising has not reached them and life seems normal.”

Political analyst Siddik Hassan Sukru, who lives in Erbil, thinks what is happening is social unrest.

“Living conditions of the people are bad. There is no work, no money, and the government is helpless to meet the demands of the people. People had reached the point of exploding, and they did. Regional states are also involved. Intelligence services are provoking violent actions that are not the work of the natives of the region. Watch for regional powers that want to erase the Kurdistan experience,” Sukru told Al-Monitor.

Sukru said Turkey manipulates the demonstrations more than Iran does: “I don’t think Iran and Baghdad are involved. It contradicts with [Haider al-] Abadi’s interests. … I think Turkey is involved more than Iran because Ankara wants to break up the Kurdistan region. There is a 50-year-term accord between Turkey and the KDP, but we don’t know what that entails. The expectation was for a crisis and splintering of the region after the referendum.”

Sukru thinks the street protests will continue for a while but won’t produce anything because the demonstrators are not organized.

It hasn’t been clear whether it is Iranian, Turkish or some other hands that are behind the tension. But what is clear is the fury of the people with unpaid salaries and the myriad of economic and political problems. Abandoning Kirkuk under suspicious circumstances constituted a breaking point. Such developments were expected earlier but they were probably delayed because of the referendum.

Many people are convinced that regional powers are behind the events in Kurdistan. The question to be asked now is whether the Kurdish government will be able to cope with the crisis or is it the beginning of the end of the 26-year-old Kurdish government?